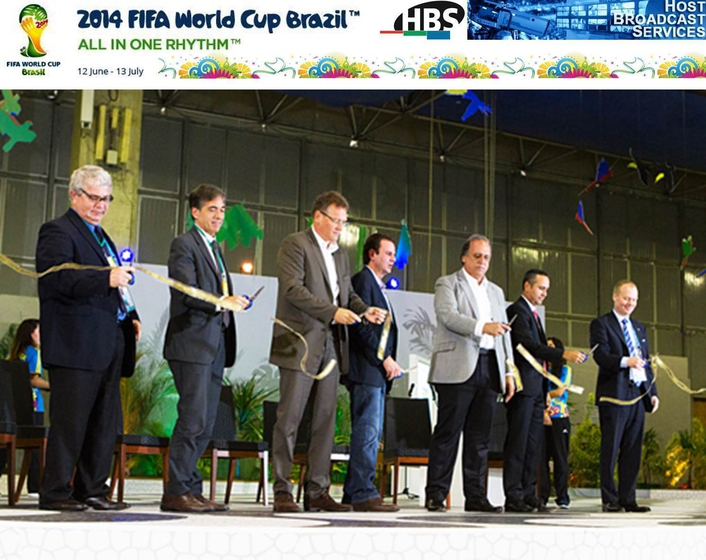 The delegation cut the ribbon to mark the opening of the IBC
The International Broadcast Centre (IBC) for the 2014 FIFA World Cup Brazil™ has been officially opened following a ceremony at the Riocentro complex in Barra da Tijuca attended by FIFA General Secretary Jérôme Valcke, FIFA TV Director Niclas Ericson, CEO of the LOC Ricardo Trade, HBS CEO Francis Tellier and several other local dignitaries and VIPs.

In his keynote speech, which preceded the ribbon cutting ceremony, Valcke explained the importance of the IBC in aiding broadcasters to transmit the events in Brazil to the viewers around the world. “The 2014 FIFA World Cup Brazil™ has begun even more today with the opening of this facility, which is given to all the media working from Rio de Janeiro. It is the link to the world – from here the world will have access to Rio, access to Brazil, access to the 2014 FIFA World Cup Brazil™ and the 12 host cities.” 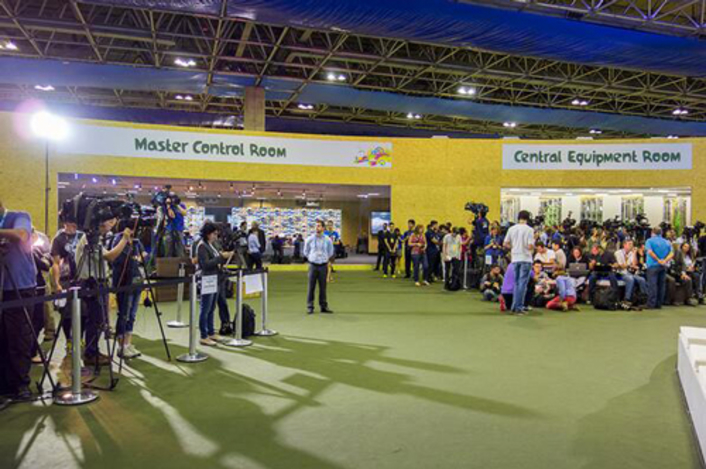 There was a large press presence to cover the IBC opening

The most visual representation of the IBC’s opening came when Valcke pressed the magic button to switch on the Master Control Room (MCR). With just 10 days to go until the tournament begins, the official opening of the IBC and the active status of the MCR, combined with another 30 MRL organisations arriving at the IBC this week, has made the 13th venue of the 2014 FIFA World Cup Brazil™ as busy and industrious as a small town.

Also speaking at the opening were Niclas Ericson, FIFA TV Director; Eduardo Paes, Mayor of Rio de Janeiro; Luiz Fernando Pezão, Governor of the State of Rio de Janeiro; Genildo Lins, Executive Secretary of the Ministry of Communication; and Luis Fernandes, Executive Secretary of the Ministry of Sports. “We don’t have the opening match today, but for us at FIFA TV this is an important kick-off moment for the 2014 FIFA World Cup Brazil™,” explained Ericson. “The IBC is the nerve-centre of the entire TV and multimedia production. We are servicing a record number of media companies with rights to show the 2014 FIFA World Cup Brazil™. As of today, we have 161 main TV Licensees, over 340 sub-licensees and 158 radio licensees. We don’t think there is any similar media rights programme in the world for any event.

“There has been great teamwork to get the IBC together. I’d like to thank, in particular, the city of Rio and Mayor Eduardo Paes and his team for their enormous support during this journey; the LOC for their tireless efforts; and HBS, FIFA’s appointed host broadcaster, under the leadership of Francis Tellier. This is the fourth FIFA World Cup™ we have worked on together.” 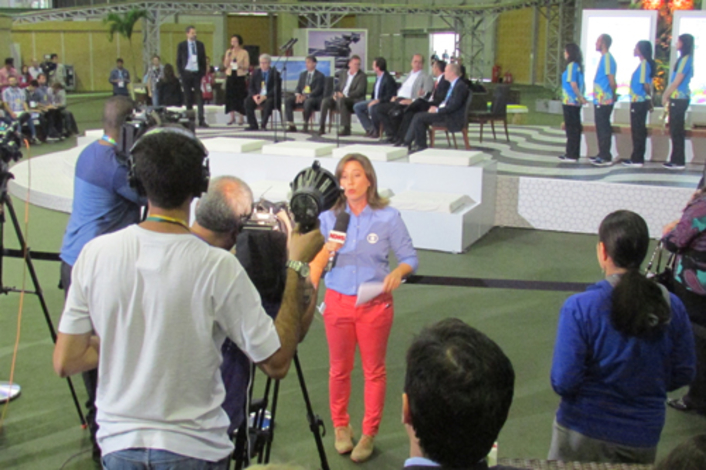 Meanwhile the Mayor of Rio de Janeiro, Eduardo Paes, gave a heartfelt speech welcoming the broadcast community to the Cidade Maravilhosa and highlighting the great efforts being made to improve Brazil for all, not just those visiting this summer. “I welcome all of you to the city of Rio de Janeiro. As you know, the IBC is the nerve-centre of the 2014 FIFA World Cup Brazil™ and I hope you’ll also be able to enjoy all the wonders and beautiful things in this city. The FIFA World Cup™ is the biggest sporting event in the world, covered by all of you. This means the world’s press will look towards this country, this city, and will try to get to know and decipher the characteristics of the country. We are extremely proud to host the 2014 FIFA World Cup Brazil™. 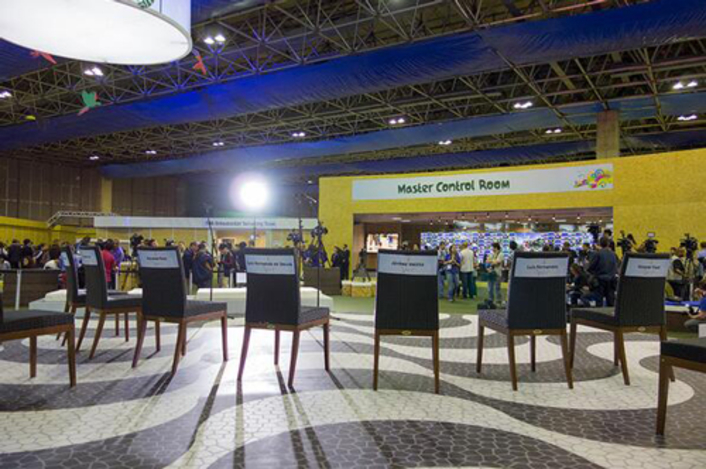 Behind the scenes of the IBC opening, each chair marked for a delegate

"As a Brazilian and a Carioca, I like to say that Brazil may not have reached the level of development of what we call the countries of the first world. People arriving in Brazil and thinking they will be arriving in England or who come to Rio and think they will be arriving in London may be frustrated. As a Brazilian I know Brazil is better than England and Rio is more beautiful than London. We hope you will be able to discover that. I think you have to compare the city – all its difficulties, its challenges – with how it was 20 or 30 years ago. This past decade Brazil has taken 30 million people out of absolute poverty. We have been upgrading and renovating the infrastructure, which is a huge work. Rio is a city that doesn’t hide its problems, its poor people. Brazilians all love football, they have a passion for football and they will reserve an excellent welcome for all of the people coming here. I hope you will be able to see with your own eyes all the virtue of the wonders of this beautiful city.”

Earlier in the day groups of media representatives were given tours of the IBC, visiting the Brazilian Plaza and FIFA World Cup™ Plaza to see the key facilities such as the MCR, Central Equipment Room (CER), Production Centre, Production Control Room (PCR) and Quality Control Room (QCR).

The 2014 FIFA World Cup Brazil™ begins on Thursday 12 June with the match between Brazil and Croatia in Sao Paulo.

With two days to go before the Opening Match in Sao Paulo, over 600 HBS staff have already made their way through the training and orientation sessions, with many more scheduled for the next two days.