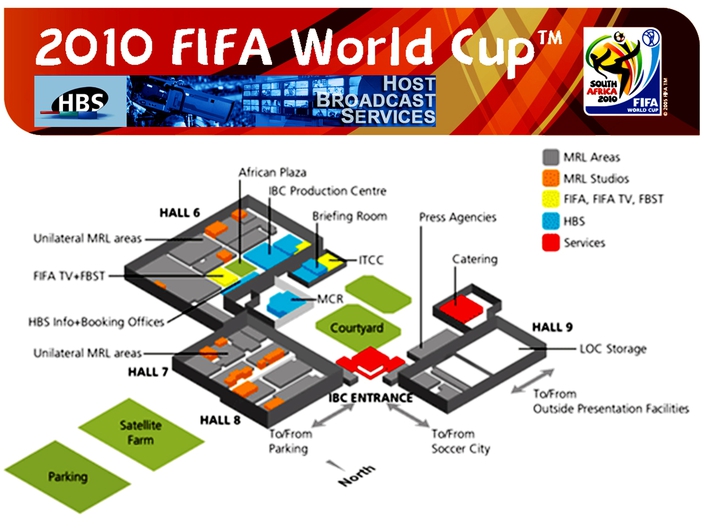 The International Broadcast Centre (IBC) for the 2010 FIFA World Cup™ is located at the Johannesburg Exhibition (Expo) Centre (JEC) - in the south-west of the city - an existing exhibition centre and part of the NASREC complex.

Following a highly competitive process, the City of Johannesburg was selected to host the International Broadcast Centre (IBC) for the 2010 FIFA World Cup™. Johannesburg was chosen for many reasons, including the quality of its infrastructures, the variety of accommodations and activities available and its role as an international gateway into South Africa, as well as its strongly expressed willingness to provide all possible support for the IBC and its users.

Additionally, Johannesburg is the host city of two of the ten FIFA World Cup™ venues - Ellis Park and Soccer City; the latter is within walking distance of the IBC and will be directly accessible from the IBC’s main entrance. These two venues alone will witness a total of 15 matches including the FIFA World Cup™ Opening Match and the FIFA World Cup™ Final. The IBC location is also within driving distance of another five host cities (Mangaung/Bloemfontein, Nelspruit, Polokwane, Tshwane/Pretoria and Rustenburg). Twenty-six matches will take place at these five venues. The IBC site lies a convenient 37km from the OR Tambo International Airport. FIFA, the LOC, the City of Johannesburg and HBS all share responsibility for the smooth functioning of the IBC.

The IBC is divided into the following halls

• Hall 6 of the Johannesburg Exhibition Centre (JEC) and the Black Eagle Conference Centre are dedicated to both multilateral and unilateral operations. All multilateral areas, including the MCR (Master Control Room) and CER (Central Equipment Room), are located in a central position using, where possible, existing rooms. These rooms are adjacent to Hall 6 where additional extensions for multilateral areas have been constructed. The Broadcast Information Office (BIO) and the Booking Office serve as the key multilateral interfaces for the MRLs and face the African Plaza. The FIFA TV and FBST offices are also located in Hall 6.

• Halls 7 and 8 of the JEC are dedicated exclusively to unilateral operations.

• Hall 9 is dedicated to unilateral operations and the on-site MRL empties storage. Access to the IBC Outside Presentation Studios, including the bookable positions, runs via Hall 9. A dedicated golf cart parking inside Hall 9 permits the parking of such vehicles without disturbing the IBC operations.

• The Bateleur Centre accommodates press-related functions on behalf of FIFA and/or the LOC.

• The IBC main entrance is located between Hall 8 and Hall 9. The position of the main entrance creates perfect access possibilities to/from the parking area, the Soccer City stadium and the main transport hub.

• On the east side of the IBC, between the IBC parking and Halls 7 and 8, a paved area functions as the IBC Satellite Farm.

• The main delivery gate is located between Hall 6 and 7 and lies adjacent to the IBC Satellite Farm.

All the IBC halls are gathered around a central courtyard. The courtyard is surrounded by covered walkways which connect all the participating halls. It will be possible for IBC users to circle the IBC completely internally or simply cross the open air internal courtyard.

• LOC Welcome Desk: A LOC welcome desk is situated by the IBC main entrance and provides information about the city of Johannesburg and welcomes new arrivals to the IBC.

• Internet Terminals: Media information terminals are located around the African Plaza inside Hall 6 and close to the entrances of Halls 7, 8 and 9. They have been installed and are maintained by FIFA and the LOC. The terminals give access to the FIFA Media Channel and provide host city information and general internet connectivity

• FIFA TV HD Cinema & IBC Visits: The FIFA TV HD cinema will showcase live HD coverage of 56 matches (excluding eight of the 16 simultaneous matches). This area will give IBC users the opportunity to watch matches in HD quality with exceptional acoustics. The room is accessible both directly from the central courtyard and via Hall 6.

• The FIFA TV HD cinema is one of the focal points of IBC visits, which FIFA and HBS are organising for MRL guests and other IBC visitors. FIFA and HBS will communicate the registration procedure for an IBC visit in due course via the MRL newsletter. 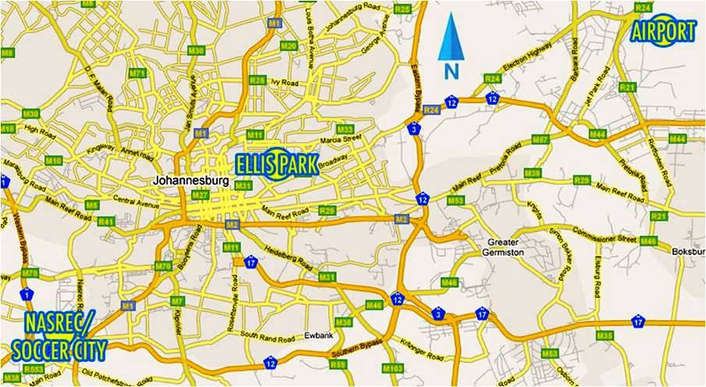 Location of the IBC, Soccer City and Ellis Park in Johannesburg