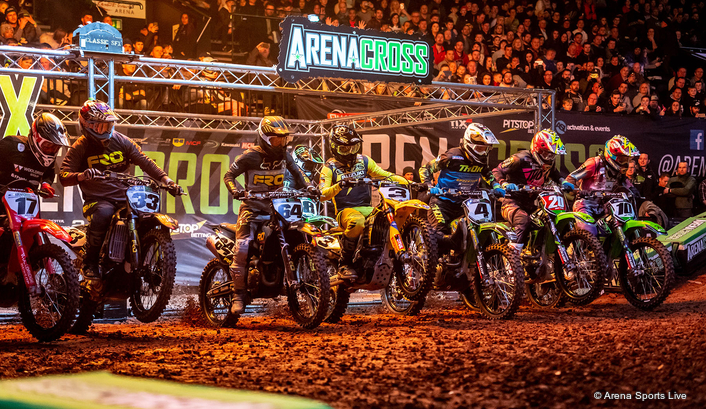 The heady mix of highly tuned bikes, screaming engines, screeching tyres and brakes and supernatural speed races meshed with the breath-taking daring of motorcycle stunt acrobatics… indoor Motocross racing and Freestyle MX all rolled into a single adrenaline fuelled night of seat-edge action complete with pumping soundscape… and you have the heartbeat of Arenacross (AX)!

Producers and organisers Arena Sports Live presented these unique thrills and spills in three of the UK’s leading arena venues – Belfast, Birmingham and Sheffield – for their 2019 AX tour, with HSL supplying a full production package – lighting, video and rigging – plus sound in partnership with Nitelites.

Additional venue ‘sports lighting’ was also provided by HSL for the two Birmingham shows at the Resorts World Arena (NEC).

HSL’s project manager was Ben Perrin. He and the team were delighted to be back having supplied lighting for the 2018 tour, and lighting and video for the recent Liverpool International Horse Show, also an Arena Sports Live event. They worked closely with producer Matt Bates and production manager Tony Nash from Arena Sports Live.

Ben produced an outline production lighting design, then called on the huge experience of Nick Jevons as programmer, lighting director and operator on the road. He utilised a flexible package of beam, spot and wash moving lights to ensure appropriately hi-impact lighting to match the hi-velocity action, excitement and sounds.

Nick’s challenge was to make it powerful, dramatic and totally in the face… a task he relished and a style he’s embraced in the past, lighting dance festivals like GlobalGathering.

Other issues included ensuring that there was enough light in the correct places for the riders to see at all pints in their dynamic trajectories, but that it was also not at any point in their eyes – with intense, fast moving bike gags coming at you… this was not easy! 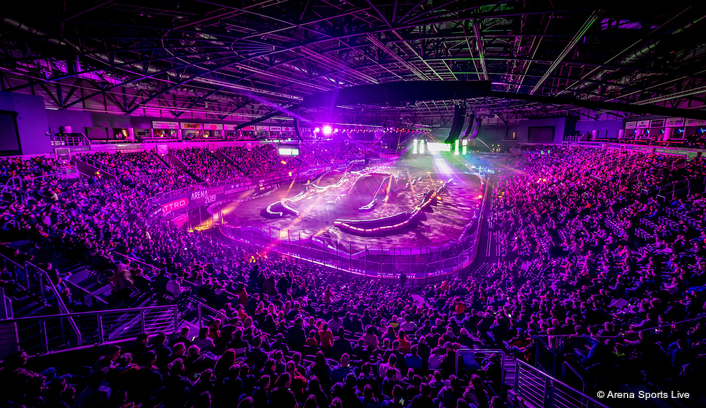 A series of lighting trusses were installed over the arena and a selection of moving lights – around 120 in total – were dotted all over these, including some of HSL’s new Chauvet Maverick MK3s together with Maverick MK2 Washes, Maverick MK2 Profiles, Vari*Lite 6000 Beams, Philips SL Hydrus 350 beam washes and Martin MAC III AirFX.

These were joined by over 50 x SGM Q-7 LED strobe blinders.

On the floor, SGM LED Beams lined the ramp in the middle of the arena which the MX stunt display team used to get airborne!

During the programming period, he had to be as adaptable as possible to incorporate tweaks and changes to the running order which continued right up until showtime, so on-the-fly requests needed to be dealt with quickly and efficiently.

He commented that the Chauvet MK3 washes were a “great fixture” for this type of show, with “punchy tight beams and the effects macros which were extremely useful for creating eye-candy” when building the show’s big, ballsy sweeping signature looks – not totally unlike an EDM event!

Lighting the stunt teams as we noted was tricky and required the most precision, and the audiences also needed to be able to see them. Having the Q-7s to hand enabled him to cast a nice even wash across the space that was also vital for this section of the show.

Around the display section, the start, middle and end of the show he made as dynamic and vibrant as possible, deploying the VL6K Beams and MAC III AirFX to help create eye-burning showstopper effects in the seamlessly flowing visual extravaganza that encompassed the race heats, finals and plenty of surprises along the way!

Nick was joined on the lighting crew by HSL’s Andy Whitt, Steve Foden and Tom Soltau. 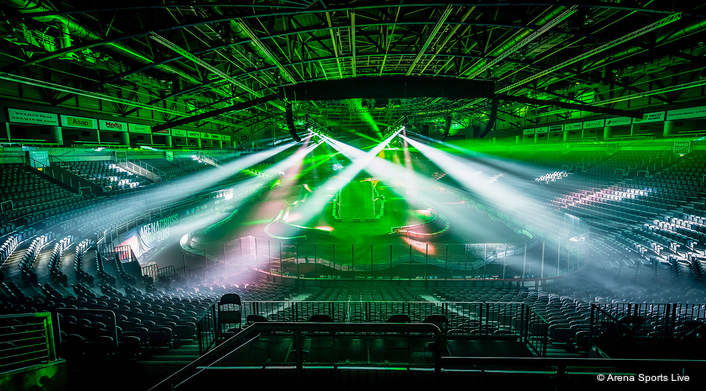 They utilised over 400 panels of Martin EC10 and EC20 product – of which HSL has a substantial stock, with the main screen flown at one of the long ends of the arena, measuring 8 metres wide by 5 high, made up from EC10.

This was flanked by two 1.5-metre-wide by 8-metre-tall columns of EC20 each side that showed a mix of creative content and branding. A double-sided 5 x 2 metre header screen was supplied for the start/finish line in the arena - all flown.

The EC product was chosen for its quick and easy set-up… they had only 24 hours to get the whole production in, rigged and ready, and so needed something handleable and reliable.

A Christie Spyder X20 video processor was at the core of the system, taking care of all the routing, with a Resolume media server system for playing back last laps, finishes and other highlights and some other graphics that specifically needed to be quick accessed.

All the other video content including sponsor logos and showreels were stored and replayed via PlayBack Pro machines.

A Roland V800HD Mk II switcher operated by Joe Wilcox was used to cut the cameras… which were supplied by another company, and their signals fed into the HSL system to be selectively output to screen.

Ben Perrin commented that it was “great to come back and collaborate with creative director Matt Bates and all the crew and staff involved at arena sports live”. 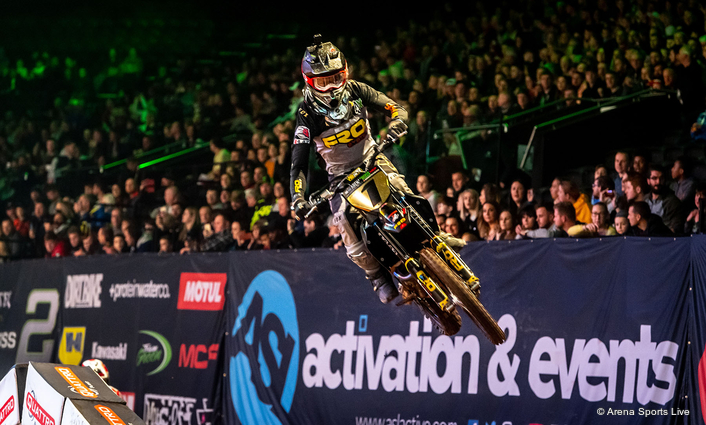 “Having been the supplier of technical production for the 2017 tour, all department teams knew the high standards and quality of production required to make the 2019 shows an even greater success. The lighting and video needed to complement the high octane show flawlessly, while being flexible enough to incorporate the diversity of the action - from racing to freestyle displays. The crew and equipment worked brilliantly to make this a reality.”

HSL is looking forward to working on future shows with Arena Sports Live.