New Zealand’s leading audio facilities provider OSB puts all-Lawo solution on the road
The biggest sporting event ever to take place in New Zealand is the 2011 Rugby World Cup, which kicks off September 9 with a match between New Zealand and Tonga at Eden Park in Auckland.  A total of 48 matches will be broadcast by Sky Network TV, all of them in HD with 5.1 surround sound, and the audio facilities company OSB has standardised on Lawo digital mixing consoles for all its OB operations.

Auckland-based On Site Broadcasting (OSB) has spent the last 3 or 4 years building up to this prestigious tournament, commissioning new HD vehicles and equipping them with Lawo mc²66 mixing consoles. “We’ve had quite a lead up to the Rugby World Cup (RWC),” says OSB founder Ray Standidge.  “Usually we cover about 175 rugby matches in a year, and this year, we’ve had the Super 15 season, between teams from New Zealand, Australia and South Africa, and the ITM Cup, which has played 14 matches every week.”

OSB’s fleet of four HD vehicles, supplemented by two flyaway units also equipped with Lawo consoles, will cover the 12 venues for the RWC, roaming from Whangarei in the north of the country to Invercargill in the south.  “These are highly-specced matches and, even though we are used to it, this 8-week tournament will require a lot of back-up,” says Standidge.

All of OSB’s vehicles are designed as stand-alone audio and video broadcasting units.  With technical specs that include up to 276 inputs, 48 sub groups, 32 aux sends and 96 track busses, the mc²66 consoles can be configured in hundreds of different ways but they won’t be.  “We wanted all our audio facilities to be identical, with the same configuration for each console so the operators would be able to move between them seamlessly.” 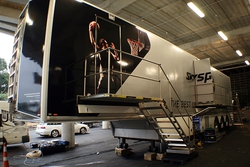 “The whole audio network is carried on a single fibre optic cable,” explains Rene Bullinga from PROTEL, Lawo’s distributor in NZ, who also points to the exceptional redundancy provisions of the Lawo systems as being an influential factor in OSB’s choice.  “OSB will gain advantage by using the same spec for each of their mobile units.  Although the flyaway kits are using mc²56 consoles, more compact and therefore more flexible for situations where space is at a premium, all the units are using the same combination of cores and I/O and DALLIS.”

Typically the OSB configuration is mc²66 (or mc²56) console with router, and two DALLIS units for accessing machines and EVS playback units in the OBV.  Another DALLIS stagebox is used in the field, and a fourth one is place in the commentary box to handle commentary feeds and intercom returns.

The OSB OBVs are using VSM Control as their management system, benefitting from its direct interface with the Lawo equipment.  “Not only do you get great flexibility in the system, allowing very quick changes from one set-up or operator to another, but you don’t have to have an audio layer on the vision router,” says Rene Bullinga.

“Everything audio at this World Cup is Lawo,” confirms OSB’s Ray Standidge.  “Our guys have been using the Lawo products for several years now and we’re very comfortable with their technology and the level of support they give us.  PROTEL is holding critical spares here in NZ because of the important of the event, and we have no doubt that the systems will deliver sonically and in terms of reliability.”