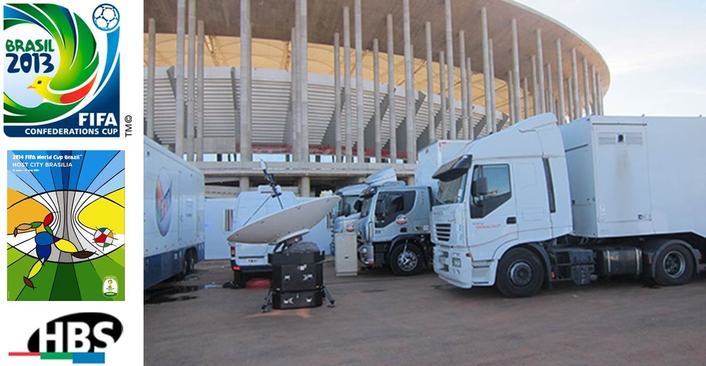 The Opening Match of the FIFA Confederations Cup Brazil 2013 between Brazil and Japan was played at Brasilia's Estadio Nacional
The FIFA Confederations Cup Brazil 2013 has reached the days of the half-finals and HBS’ teams are working successfuly in each participating stadium, and at the International Broadcast Coordination Centre (IBCC) in Belo Horizonte.

While the excitement and drama will unfold at each venue, particular interest from a production point of view will be focused on the Estadio Mineirao in Belo Horizonte. The three matches played at this stadium will be used for dedicated testing and demonstration of selected workflows, cameras, feeds and services ahead of next summer’s 2014 FIFA World Cup Brazil™.

Deliverables such as player tracking, Match Day –1 (MD–1) coverage, FIFA MAX asset management and logging, as well as multimedia content, access and delivery will all be assessed in order to confirm their validity and quality.

Up to 11 additional cameras are following the matches at Belo Horizonte, on top of the 18-camera coverage that was the standard at each of the other stadiums. Among those cameras being evaluated at the Estadio Mineirao are the cable camera system and aerial – helicopter – coverage. The Tunnel Cam, used ahead of the Final at the 2010 FIFA World Cup South Africa™, is another whose editorial value will be reviewed and developed.

Belo Horizonte is also home to the IBCC, the base of HBS’ operational headquarters for the event. The majority of HBS Production’s quality control and testing equipment will be housed in the compound situated alongside the Estadio Mineirao.

MRL interest has been encouragingly high, with record bookings already recorded for the Opening Match in Brasilia between Brazil and Japan. As a simple comparison, the number of commentary positions booked for the Opening Match of the FIFA Confederations Cup South Africa 2009 was 30, four years later that figure has jumped to 45 booked commentary positions.

HBS activity has been constant at all venues in the weeks leading up to the FIFA Confederations Cup Brazil 2013.