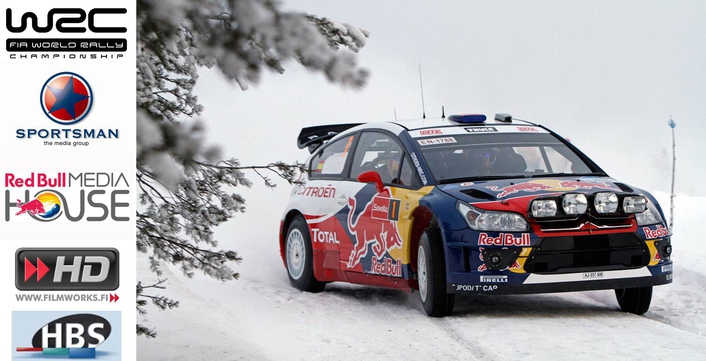 .
As another eventful year crawls to a close, Host Broadcast Services is proud to announce one more piece of good news before the new year: the company has just been appointed by the sportsman media group and Red Bull Media House, the new promoter of the FIA World Rally Championship, to serve as their TV production partner for the coming 2013 WRC season.

The World Rally Championship is the top-ranked rally series organised by the FIA. It currently consists of 13 events of up to 25 special stages, driven on gravel, tarmac, snow and ice. The WRC provides authentic and competitive motorsports action featuring powerful cars and fantastic drivers in a unique environment. As such, it is a perfect sport for HBS’ signature mix of technological innovation and high quality production — on-board cameras, aerial coverage and sophisticated microphones are already planned, with additional innovations in the pipeline.

HBS will produce both the daily news and a 26-minute highlight show of each rally, as well as a 52-minute show featuring all the highlights of the WRC season. The company will work in close collaboration with its Finnish technical partner Filmworks to bring the intense emotions of this exhilarating sport to TV viewers worldwide. HBS’ veteran producer Nick Atkins will lead a dedicated team tasked with the production and delivery of world-class coverage of the 13 races of the WRC calendar, beginning almost immediately with the legendary Rally Monte Carlo, which takes place on 15-20 January.