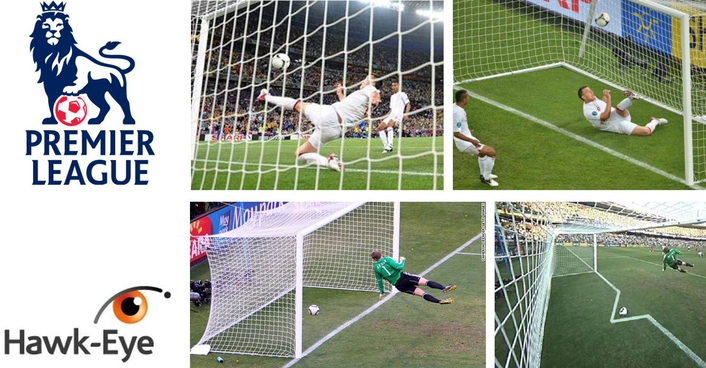 .
The English Premier League has become the first domestic football competition to adopt goal-line technology (GLT) by announcing that Hawk-Eye will provide systems at its games from the start of the 2013-14 season. The system will enable Television audiences and crowds in stadiums to watch replays of goal-line technology decisions. The first domestic match to use the system should be the Community Shield at Wembley on August 11, and the first Premier League match will be the 12:45 kick-off on August 17.

Frank Lampard welcomed the decision by the Premier League and Football Association to use Hawk-Eye goal-line technology next season.  The Chelsea midfielder was famously denied a clear goal in England’s 2010 World Cup defeat to Germany, prompting FIFA to finally give goalline technology the green light after years of argument. “It’s a no-brainer,” said Lampard on Thursday. “It’s been a bit of time coming, but they got there in the end. I think it will bring an excitement factor on the times that it is used and it will just give you the correct answer, which I think at this level, when it’s so important, we need that.”

The agreement, hailed by England manager Roy Hodgson as "a momentous day" for football, will see all 20 top-flight clubs use the system and the Football Association is set to follow suit with Wembley Stadium. Hodgson, speaking at the Soccerex conference in Manchester, told reporters: "It's something that people in football have wanted for a long, long time. It has been a big debate and it was pushed back but it's great now to see that everyone is on the same page and that they have introduced it."

HawkEye, which was sold to technology giant Sony two years ago, already provides systems for tennis and cricket.The Premier League provided seed money to help Hawkeye develop a goal-line technology system back in 2007, but there was no formal relationship with the company.

Yesterday’s announcement will come as a boost to Hawk-Eye after it was one of three firms to miss out on a contract with FIFA. World football’s governing body this month announced that GoalControl had been appointed as the official GLT provider at this year’s Confederations Cup, paving the way for its system to be implemented at the 2014 World Cup provided that the performance of the system during the warm-up tournament meets all necessary FIFA requirements. The Premier League has been a long-time backer of GLT and chief executive Richard Scudamore said that Hawk-Eye had been selected out of the four FIFA-licensed operators due to its utilization of a camera-based system.

“The Premier League has been a long-time advocate of goal-line technology, and at times it didn’t look like it would be something we would be able to introduce,” said Scudamore. “However, since FIFA took the decision to permit it we have been working hard to get a system in as soon as practically possible. Football is fundamentally a simple game; whichever side scores most goals wins. So, when one is scored, or indeed not scored, and we have the ability through technology to definitively know whether the ball crossed the line we should absolutely use it.”

Scudamore added: “Principally, it is about getting it right. Fans, players and managers exhort, strain and stress respectively for their teams to score or prevent goals being scored, so we as administrators should do all that we can to ensure the correct decisions are being made. Of the four companies that are currently licensed by FIFA, Hawk-Eye stood out for their excellent track record in delivering for sport over many years. The fact it was a camera-based system was critical. Replays will be made available to all our host broadcasters and we are examining the feasibility of them being used on in-stadium big-screens. It is essential that fans see the system in action to know that it is working.”

Paul Hawkins, inventor of Hawk-Eye, added: “Hawk-Eye is delighted to be the partner that the Barclays Premier League trusts to deliver accurate and reliable goal-line technology. We understand the responsibility that we have been given, and that the real challenge lies ahead in consistently delivering the technology that football deserves.”

The technology instantly sends a message to the referee that the ball has crossed the goal-line via a special watch. League chiefs made their recommendation for HawkEye based on both cost and ease of implementation and use. 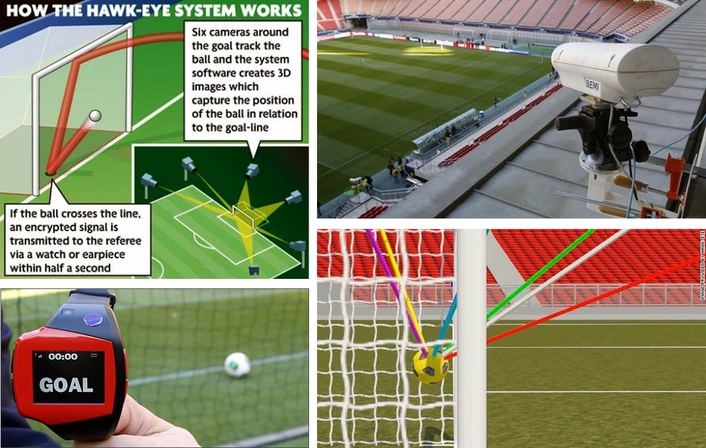 Former Arsenal and FA vice-chairman David Dein, who has long campaigned for goal-line technology, claimed every top-flight referee in England was in favour of having a system. He said: "The Premier League will be the first league in Europe to introduce it. I have been on this campaign for six or seven years and now it's going to happen. The referees need help, the camera will always beat the eye, and every referee in the Premier League is in favour of it."

About Hawk-Eye
Hawk-Eye is one of the leading vision processing companies in sports. First used as a broadcast tool to analyse decisions in Cricket, Hawk-Eye has since revolutionised sports broadcasting, officiating and coaching across a variety of sports including Tennis, Snooker and Gaelic Hurling.

Situated at Sony Europe's offices in Basingstoke, one hour outside of London, the company is proud to be an integral part of many of the world's premier sporting events. Hawk-Eye has an annual involvement in over one hundred events including The Wimbledon Championships, The Cricket World Cup, Davis and Federation Cups, World Championships snooker and the Indian Premier League cricket.
Hawk-Eye’s success has been recognised through several honours including two BAFTAS, one Emmy, one Logie, three Royal Television Society Awards and recognition as Best Technology by the British Computer Society.
The company continues to grow, develop, and innovate across sports, to stay one step ahead of the evolving demands from officials, athletes, coaches and fans alike.