.
FIFA is pleased to confirm Hawk-Eye as the official goal-line technology (GLT) provider for the FIFA Women's World Cup Canada 2015™, which kicks off in Edmonton on 6 June 2015.

It will mark the first time that GLT has featured at the pinnacle event for women's football and follows the successful implementation of the technology at the FIFA World Cup™, the FIFA Confederations Cup and three FIFA Club World Cups.

The decision comes after a tender process announced in December 2014, when interested FIFA-licensed GLT providers were invited to join an inspection visit to each of the venues in Edmonton, Moncton, Montreal, Ottawa, Vancouver and Winnipeg.

Hawk-Eye is a camera-based system, with seven cameras per goal installed as high as possible within the stadium structure. Utilising the latest technology of high-frame-rate cameras and cutting-edge vision-processing techniques, Hawk-Eye is able to locate the ball at all times even if it is only found by two of the seven cameras. The system is millimetre-accurate and indicates whether or not a goal has been scored within one second by a vibration and visual signal on each match official's watch.

The use of Hawk-Eye in Canada will be subject to a final installation test at each stadium, which is a standard procedure as part of the official certification process defined in the GLT Testing Manual. These tests will be conducted by an independent test institute. Prior to the start of every game, the match officials will also carry out their own tests, in line with the operational procedures approved by The International Football Association Board (The IFAB). 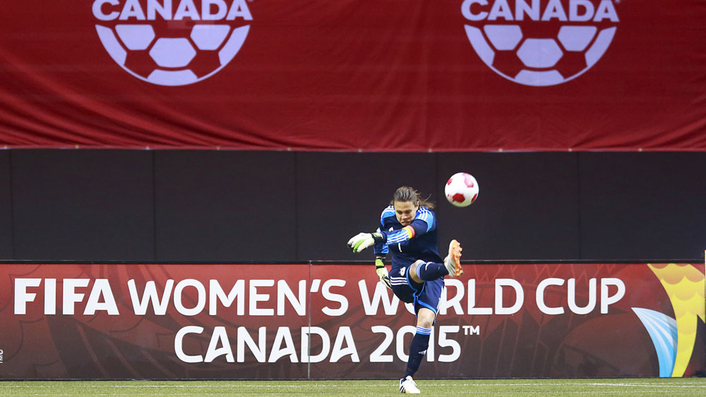 The FIFA Women's World Cup Canada 2015™ will be the second FIFA event to feature Hawk-Eye after it was first used at the FIFA Club World Cup in Japan in 2012. Other GLT providers chosen by FIFA for previous tournaments include GoalControl GmbH and Fraunhofer IIS (GoalRef).

Canada 2015 is the seventh edition of the FIFA Women's World Cup™. It will be played from 6 June to 5 July and feature the top 24 teams in the world.

About Hawk-Eye
Hawk-Eye is a sports technology company that provides officiating, broadcast and digital solutions that raise the game for fans and players.

Hawk-Eye is an integral part of the sports experience and has become a trusted partner to many of the world's largest sports federations, media companies and sponsors by providing award winning, innovative solutions that make the game fairer, smarter, safer and more entertaining.

Hawk-Eye is part of Sony and has offices around the world.