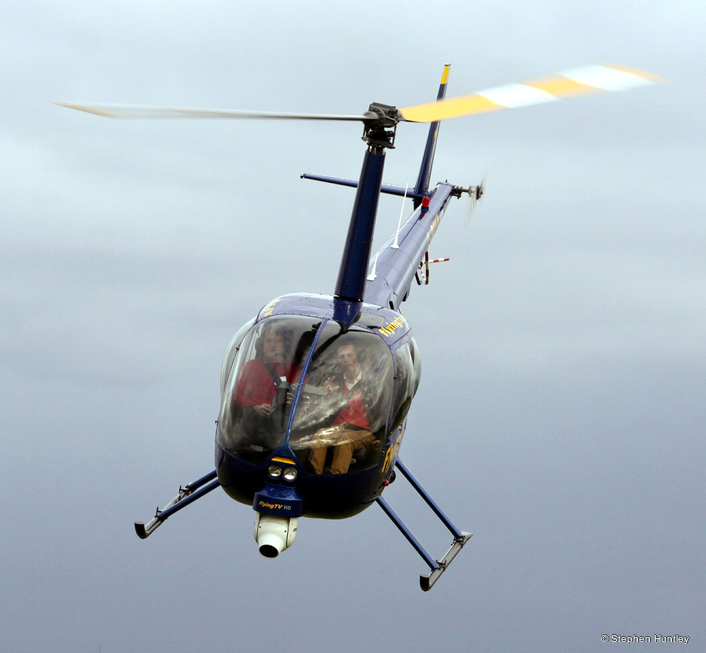 Mike Smith commenced the workshop by detailing how helicopters fly, how they are affected by weather and terrain, how cameramen should always work with pilots with aerial filming experience, and safe operating techniques whilst in the air. Loss of tail rotor effectiveness was shown to be the cause of many accidents involving aerial filming. Pilot error was the principal cause of most mishaps. On a more positive note, Mike showed how safe helicopters in fact are and how they provide a unique filming platform.

Mike specialises in TV work from his own Cineflex-equipped Robinson helicopters and champions the use of such gimbal-mounts for rock-steady aerial work.Alan Duxbury gave a detailed account of the circumstances surrounding a near-fatal low-level crash he was involved in whilst filming for a Ray Mears programme in the US and of his legal battle to obtain compensation.

Rex Palmer was able to show a chilling video clip of the occasion when the helicopter he was filming from cartwheeled into a Middlesex lake after a skid clipped the surface of the water.

Live via a video link set up by Vislink

Rex Palmer was able to show a chilling video clip of the occasion when the helicopter he was filming from cartwheeled into a Middlesex lake after a skid clipped the surface of the water.

Laurie Gilbert's contribution, given by Rex Palmer, was a detailed account of how to rig a helicopter safely for open-door filming, how to obtain steady hand-held pictures, and the use of aerial mounts.

Two members, Max Hodgetts and Phil Nixon, won the opportunity to fly with an instructor on a 'Hover Challenge' which culminated with them attempting to hold a manhole cover central in the view of the aircraft's Cineflex camera whilst flying a 360 degree orbit around it. The cameramen's actions were relayed live via a video link set up by Vislink technicians for the event.

About the Guild of Television Cameramen

Unlike most other organisations, the GTC offers its members the chance to attend workshops of this high standard on a regular basis completely free as part of the membership subscription.

Formed in 1972, the Guild of Television Cameramen has over 1,000 members in countries as far afield as Australia, Russia, Singapore, South Africa and the USA. The majority work in aspects of television ranging from corporate video production through news and current-affairs, sports and light entertainment, to documentary and drama. The GTC is a non-profit-making organisation run by a council of volunteer television professionals. It is financed by subscription from its members as well as sponsorship from equipment manufacturers and suppliers. As a result, the GTC offers a channel for manufacturers to consult with working cameramen when designing new equipment. The GTC is an authoritative source of advice and information on all matters concerning television content production. Its aim is to preserve the professional status of television cameramen and to advance standards and expertise within the profession.