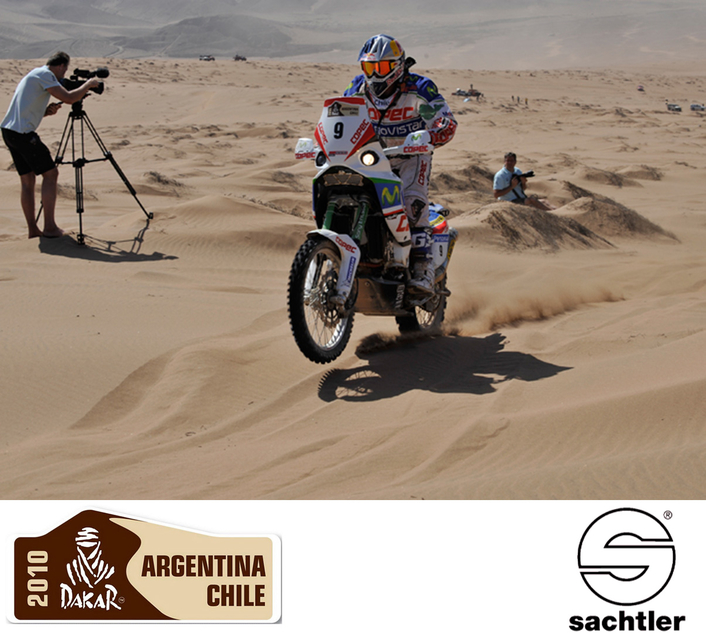 With just three hand movements, the Speed Lock CF tripod is – with the Video 18 S1 fluid head – set up and ready to film
"This is Dakar: Every day a new surprise! You have to decide how you're going to manage it." Léon Jansen of the official DakarPress Team loves the challenge of the rigorous desert rally. For the second time now, Sachtler, a Vitec Group brand, has furnished the eight-member press team with professional camera support equipment. In addition to the new Video 18 S1 fluid head and the Speed Lock CF tripod, a Sachtler camera stabilizer system was also used in 2010 – the artemis DV Pro MD.

During the rally, the team not only has to fight against a lack of sleep and the highest UV index in the world – there is also the rough terrain to consider: "When recording in the dunes and at the camp, we used the camera stabilizer system artemis DV Pro MD. When walking, the system absorbs movement very well. Steady recording and perfect pictures are the result," says the Dutchmen. Although the artemis DV Pro MD was developed for smaller HDV cameras, the rigs offer all of the features of the big systems – for example, Dual Dynamic Balance with fine adjustment, the quick release coupling for easy disconnection and the six-core main cable with Lemo plug for a dependable connection to the module. For the 2011 Dakar Rally, the DakarPress Team is planning to have the operator film from the roof of the Jeep with artemis. The operator is already practicing diligently.

One step ahead of the drivers

When the drivers appear, the DakarPress Team is already there and films the rally participants from different perspectives. To accomplish this, dependable equipment plays an important role – there are no second chances. That is why once again this year, Léon Jansen and his team relied on robust Sachtler products, which also have to be compact, as there is only limited space in the Jeep. The particularly lightweight Speed Lock CF tripod can be set up in the wink of an eye and nevertheless guarantees ultimate stability. The new Sachtler Video 18 S1 fluid head is also ready for filming in next to no time. The Boost Button enables a quick shift in payload range, and the tried and tested Speedbalance technology allows for rapid fine adjustment. "When the rally drivers come rushing up, things have to go quickly, or else you miss the moment for the best pictures," reports Léon Jansen. "We decided in favor of Sachtler equipment because the products always function perfectly – even under the extreme conditions of the Dakar Rally. Neither rain, dust, nor the enormous heat in the Atacama Desert, the driest place on earth, could impair their functions."