Step into the Caesars Event Space in Las Vegas, and it has all of the conventional trappings of a major sports production. Cameras and a host of broadcast equipment surround an elaborate set dressed with stadium-style bleacher seating, a commentator desk and interview stage, in addition to 75 gaming stations in the round and a decagon of overhead displays. 75 pro gamers gather in the space each week for an “H1Z1” Pro League eSports competition, which pits teams of gamers against one another as they play Daybreak Games’ battle royale hit “H1Z1.”

The event draws up to 800 spectators to the venue, but its reach extends far beyond Twin Galaxies’ doors via a Facebook Live stream. Boutique equipment rental and services shop GQC, owned and operated by DP Steve Garrett, oversees each live stream, providing technical supervision, crew and gear, including AJA Ki Pro Ultra Plus 4K/UltraHD/2K/HD recorders/players.

Hosted by sports reporter Kristine Leahy (“American Ninja Warrior”), the show features a combination of gameplay, player reactions, play-by-play analysis by sportscasters Jason Burns and Rich Campbell, player and team interviews and more. With so many elements to capture and integrate into a cohesive program, GQC Technical Supervisor Marty Meyer teamed with Michael Little, COO of design, develop and deployment group  Artistic Resources Corporation (ARC), ahead of the production to architect and implement a broadcast-grade workflow.

“Our approach to a Facebook Live stream like this is no different than if we were broadcasting to a major sports network. At the end of the day, we know we’ll be firing up an arsenal of broadcast equipment, so a smart crew and reliable tools with great functionality are must-haves,” Meyer shared. “When it comes to hiring a good production crew, they often expect top of the line equipment – from the cameras to the switcher. We knew we’d need a bullet-proof recorder like Ki Pro Ultra that professionals respect.” 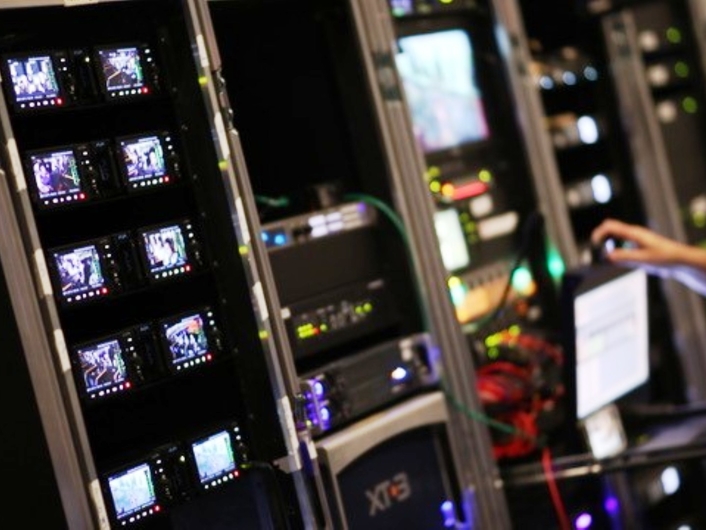 GQC’s workflow includes eight Panasonic cameras, which capture footage of the host, commentators and players; five of the cameras are handheld, one is a front of house camera on a platform, and two are mounted on jibs, including one Jimmy Jib. Ki Pro Ultras connected to each Panasonic camera are tapped for ISO records and used as primary and backup line records. A media server separately records live gameplay from each of the 75 gaming computers in real-time, while 76 genlocked POV cameras mounted above each computer monitor capture player reactions. A multi-channel AJA FS4 synchronizes three additional computers as graphics sources. Computer sources are fed to FS4 over HD-SDI and using the ROI controls (Region of Interest), an extraction of the computer desktops is scaled to baseband video at 1080p with the same frame rate as the rest of the camera sources to seamlessly switch to as part of the streaming feed.

As the Director and TD determine which content goes live, it’s run through a 192x192 router as a 1920x1080p 3G-SDI signal and sent through a switcher. Footage is then composited with graphics from a dual-channel graphics system and output in real-time to Facebook Live at 1080p. “We don’t currently see a lot of 1080p streaming because of data and bandwidth concerns, but to stay true to the gaming experience, no other frame rate or resolution was an option for us. 1080p is the standard for gaming because there’s less compression, and even though Facebook Live compresses the signal, working with 1080p throughout still gives us a better-quality picture,” shared Meyer.

Each week, the Ki Pro Ultras each record more than three and a half hours of ProRes 422 footage to bullet-proof AJA Pak Media SSDs. The Paks are passed off to the client’s in-house editorial team, who then cut the videos for a rebroadcast, marketing materials and team use. Having used other recorders on the market, GQC and ARC chose Ki Pro Ultras because they knew it wouldn’t fail in the field or produce footage with errors. “The simplest way to put it is that you don’t get fired for choosing AJA gear like Ki Pro Ultra or FS4; it’s that dependable,” Meyer explained. “With the Ki Pro Ultras, our program records are now problem free, and even though we have one for backup record, we haven’t had to use it.”

Little added, “Looking at an eSports broadcast for Facebook Live versus a traditional sports production, the demands are similar, which is why we went with Ki Pro Ultra. It’s the universal go-to for confident recording because it’s been heavily vetted and ruggedized, and by that, I mean it’s been proven to perform consistently, even in rough environments.”

About AJA Video Systems, Inc.
Since 1993, AJA Video has been a leading manufacturer of video interface technologies, converters, digital video recording solutions and professional cameras, bringing high-quality, cost-effective products to the professional broadcast, video and post production markets. AJA products are designed and manufactured at our facilities in Grass Valley, California, and sold through an extensive sales channel of resellers and systems integrators around the world.