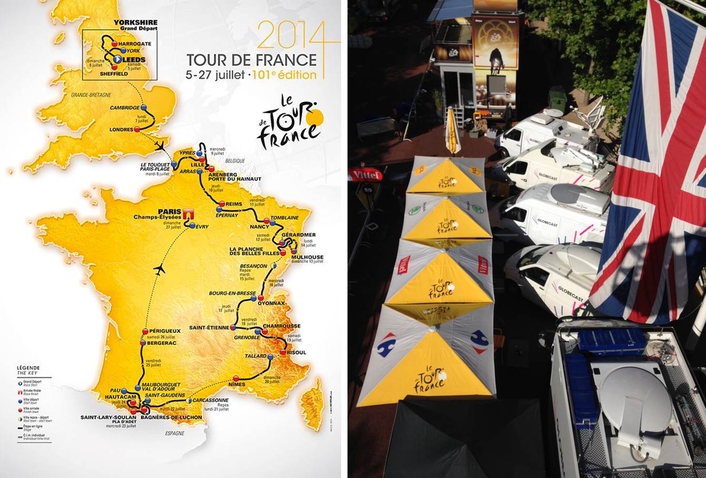 Three weeks throug rain, wind and sun: Tour de France 2014
Globecast has once again helped bring innovative and dramatic coverage of one of the world’s most iconic sporting events – the Tour de France – to TV screens both across France and internationally.

François Persiaux, Globecast’s Director of Contribution, France, says, “The Tour de France is a huge sporting occasion, and one whose popularity continues to grow as the massive crowds at the Grand Depart in the UK showed. It’s a huge logistical and technical challenge, one that Globecast rises to. By its very nature the event is constantly moving: much of the TV infrastructure must follow the cyclists as they compete in each stage, and the production facilities, which are installed at the finish line, must be relocated every day. And then you add in the mountains and adverse weather conditions such as this year’s rain!”

Globecast provides the satellite infrastructure for the event, with signals being sent via microwave from multiple motorbikes along the route to a helicopter and a plane. These signals are then transmitted – again via microwave – to a stationary Globecast SNG unit out in the countryside. In turn, that sends all the signals via satellite to the production facilities at the finish line. Directors there can use talkback to provide instruction to the motorcycle cameramen. Globecast provided a live feed for use both nationally and internationally.

Additionally, Globecast also provided a package to capture the intermediate sprints that are held along the route on stages, including camera and cameraman.

Persiaux says, “We have had a long association with the Tour de France and it’s always exciting to work on it. It is a genuine challenge, even in today’s hi-tech age. When mother nature is involved, along with nearly 200 hundred cyclists covering big distances, you know there are going to be tough days. But whatever the situation we make sure that viewers know what’s going on at every stage of this dramatic event.”

About Globecast
Globecast opens up global opportunities in broadcasting by making content distribution and management simple. Part of the Orange group, Globecast delivers tailored content management and delivery solutions to meet the needs of markets all over the world. For channels, Globecast provides media management and playout solutions as well as global content delivery via fibre, satellite, and IP. Through its fleet of SNG vehicles and production partners, the company also provides coverage of news, sports, and special events around the globe. Globecast has capacity on all the world’s major broadcast satellites, a three-continent proprietary fibre network and state-of-the-art facilities in the world’s biggest media hubs. Finally, Globecast has a content aggregation and distribution team that helps secure distribution on leading Pay TV platforms. Present in Europe, the Americas, the Middle East, Asia, Africa and Australia, Globecast offers simplicity, flexibility, and knowledge to the world’s leading broadcasters.