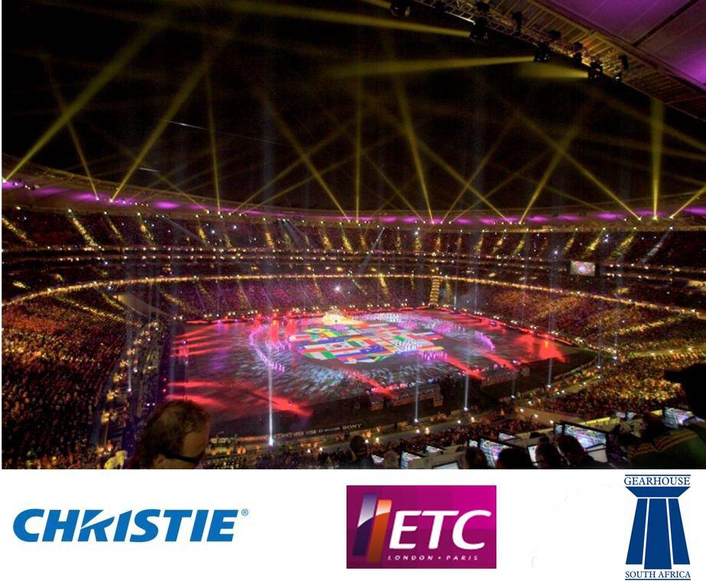 The projection, however, was contracted out to French-based E/T/C, who supplied all the hardware and control solutions, and was constructed around 18 Christie HD18K Roadsters, which helped to produce a visually stunning 30-minute show at Soccer City Stadium in Soweto. These were considered the best machine for the job, with the combination of 16:9 format and 18K power essential to producing the desired results in brightness and resolution.

The event took place ahead of the Final, which saw Spain win their first World Cup, beating Holland 1-0. It reflected the vibrancy, energy and colour that characterised one of the most successful World Cup tournaments ever. The show featured a cast of 740 including 40 “elephant operators” plus 35 headline artists.

UK based large format projection specialist, Ross Ashton, was appointed to help co-ordinate the stunning pitch projections, and he worked closely with E/T/C Paris who are the best known global exponents of the genre.

The E/T/C Paris team was led by Patrice Bouqueniaux, and this is the first time that monumental projection has been used in South Africa.

The dramatic 55 metre square projections in the middle of the field-of-play were delivered by the Christie 18K Roadster projectors, mounted on two platforms flown along the east and west (long) sides of Soccer City. The projectors were in six stacks of three, covering the pitch (which was divided into six areas). 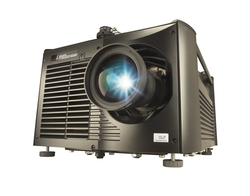 The show's video content was produced by VWV, who engaged Johannesburg based Ministry of Illusion for the graphic scenes. Each projector received its own video feed and keystone correction to eliminate discrepancies between their optical centres.

E/T/C's powerful proprietary OnlyView PC-based system was used for control, programmed and operated by Yan Kaimakis. This used 18 active OnlyView servers, one per machine with another 18 as hot backups, and data was distributed via a doubled up network fibre system — vital for such an important one-off event — devised by Gearhouse’s Chris Grandin and Dave Black.

Footage for the stadium LED screens was also output via the OnlyView system, with a pitch projection feed sent to the host broadcaster.

There were many challenges in staging the first major entertainment event in a brand new venue. Gearhouse engaged in some serious statistics and logistics, starting the get-in for the Closing Ceremony as soon as the opening match had been played, a month previously. All site/technical logistics and crew co-ordination were handled by project managers, Eyal Yehezkely and Bonni Meyer respectively, while Bill Lawford organised the arrival of 8 containers of equipment by sea freight and a further 50 tonnes by air freight, representing a massive investment by Gearhouse for the show.

Meyer took care of the logistics, crewing and administration, which included the management of up to 140 crew on site at peak times including locals, while Yehezkely looked after the technical operation, including brain teasers like where to position two projection and four follow spot platforms — built by Gearhouse Structures and In2Structures — which were flown in the roof well of the venue's upper concourse. These had to be custom designed by Tim Dunn and approved by the several sets of authorities and structural engineers involved with the stadium. The spot platforms were flown on 16 2-tonne motors and the projection ones on 10.

As for the sound system, this combined a dV-DOSC/dv-SUBS installation by Gearhouse Audio with the stadium's installed EV system, while 16 21” Turbo subs were also used.

The vision, in particular, had been an exercise in logistics. Illumination had to be a careful balance so it fulfilled the creative criteria of looking dynamic on camera as well as for the 94,000 capacity audience at Soccer City..... whilst not interfering with the Christie pitch projections.

The show itself — conceptualised and produced entirely by the VWV Group — was a fast-paced, lively and accessible mix of contemporary African music, dance and theatre, including a family of thirteen elephants (life-sized puppets) and a sensational performance by Shakira of her Waka Waka 2010 World Cup theme song.

Summing up, E/T/C confirmed, “We have known Gearhouse for many years but this was the first time that we’ve collaborated together on a show. This was the first event in South Africa where ‘real’ large-format projection has been used — and to great success.”

In fact the World Cup Closing Ceremony has been internationally acclaimed as the most exciting to date — in terms of quality and entertainment value right up in the league of high profile sporting event ceremonies; together with the whole tournament, it forms a real achievement of which South Africa can be proud.

Christie Digital Systems Canada, Inc. is a global visual technologies company and is a wholly-owned subsidiary of Ushio, Inc., Japan, (JP:6925). Consistently setting the standards by being the first to market some of the world’s most advanced projectors and complete system displays, Christie is recognized as one of the most innovative visual technology companies in the world. From retail displays to Hollywood, mission critical command centers to classrooms and training simulators, Christie display solutions and projectors capture the attention of audiences around the world with dynamic and stunning images.