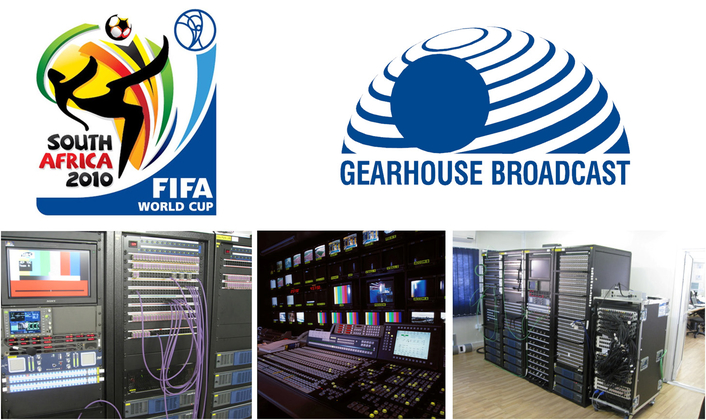 TOC Racks at Ellis Park - IBC Control Room - CIR at Ellis Park
THE football World Cup is often described as the ‘Greatest Show on Earth’, and once again Gearhouse Broadcast is right at the heart of it as the finest players around the globe descend on South Africa this summer.
With a worldwide TV audience of billions, Gearhouse Broadcast is being used by seven major multinational broadcasters to supply both project solutions and equipment.

As well as the Technical Operation Centres (TOC’s), Gearhouse Broadcast is also providing location services such as the systems integration and building of studios and facilities at the international broadcast center for individual rights-holding broadcasters can produce their own style and flavour of transmission back to their home countries.

We have designed and installed a very large 1200 m2 facility for ESPN. This facility is made up of three production galleries each with its own audio mixer, a central logging and ingest area, an on-air EVS area, Avid edit suites, a transmission area and a remote large studio overlooking Soccer City. There is also a large central production office with various audio, video and communications facilities installed on desks as required. The whole facility is virtually tapeless with a central EVS server for Ingest and logging which is connected to an Avid Unity server to allow transfer of files between Avids, Ingest and on-air EVS machines. We also have three Lawo MC56 audio desks connected together via four cores that allow total flexibility between all the control rooms for transfer of audio signals for the various 5.1 mixes being done. The communications with Bristol and all the remote sites in South Africa is being handled by a large Telex Adam system with 270 ports which include 64 RVON ports.

Gearhouse Broadcast has supplied broadcast equipment, communication facilities, two control rooms, studio and crew at the IBC in Johannesburg. This facility also has a large EVS and FCP server system making it an almost tapeless facility as well. We have also supplied a remote three camera studio facility that is connected to the IBC via a 3rd party supplied fibre and data connections.

Gearhouse have supplied one HD outside broadcast (OB) facility for all of ITV’s pitch-side presentations. The units will supply 2 way interview and presentation facilities pre and post match, together with pitch-side reporter facilities during the match. The OB facility is a small four camera unit that has been built out of our fly away rigs and installed into a small vehicle that travels around the country. Gearhouse have also supplied crew including Engineer, Sound and Cameramen for the facility.

Gearhouse Broadcast have designed and installed an IBC facility that includes a production control room, studio facility, 12 x ENG kits, EVS servers and integrated Avid editing and storage servers. This facility is on air around 14 hours per day showing matches and background stories that are edited in the four edit suits on site.

Designed and installed the IBC facilities for these Argentinean broadcasters in the IBC in Johannesburg, South Africa. This includes monitoring, distribution, production galleries and studio facilities. Torneos y Competencias S.A. was responsible for hiring the equipment and Torneos y Competencias ARG is in charge of the production of DirecTV Latin America, Fox Sports, TELEFE, Canal 7 and TyC Sports.

Gearhouse have made significant investments

The tournament has kicked off a surge of activity in the broadcast services sector with huge demands placed on manufacturers and broadcast solutions companies, like Gearhouse Broadcast, to provide the most-up-to date equipment and technology.

Gearhouse have made significant investments in Canon HD lenses, Sennheiser Microphones, Sony HD Monitors and Sony HD Cameras and Camcorders. In addition to these they have invested in Pro-Bel HD/SD Routers, Tektronix Test Equipment, Evertz VIP Multi Viewers, Harris distribution and glue products and from EVS they have purchased 14 XT2 Servers to add to an inventory of 32 EVS’s to service the demands for this product at the World Cup. 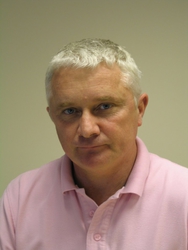 It’s not just Gearhouse Broadcast’s equipment that is in demand - the sheer logistics of the operation around the whole tournament means that the technical infrastructure behind the scenes has to be spot on, and Gearhouse Broadcast’s Project Solution and Systems Integration expertise had a major part to play.

Gearhouse had over 70 people on the ground putting in 2650 man hours in the weeks leading up to the event. Once all the equipment was shipped to South Africa, they had just 16 days to build and run system checks before kick-off.

“This has been one of the largest and most challenging projects we have undertaken due to its scale and the complexity of the logistics involved. Because of the amount of kit and the distance involved, we started preparing for the World Cup 12 months ago and it has been a very complex process” says Kevin Moorhouse, Gearhouse Broadcast’s Chief Operating Officer.

“The size of the country means that our planning and logistics needed to be extremely well organised so that everything was there and in place with plenty of time prior to the start of the tournament. We’ve got a six-person team just handling logistics from a large warehouse in Johannesburg from which all equipment and materials will be prepared and distributed and a small satellite workshop for our service engineers”.

“Whereas in other countries we would normally be able to source new equipment if we needed it overnight, in South Africa, we had to be more prepared. We’ve had to bring extra equipment with us because there is no source of broadcast equipment available in the country. If we needed another VTR, I would have to fly one in, so our planning had to be so much better”

“Our goal was to supply cost effective broadcast solutions for all our individual rights-holding broadcasters. The choice of our equipment suppliers for these high profile live sports events is always a carefully considered decision, we choose the most reliable technology on the market every single time”, said Kevin.