As a leading provider of remote production facilities for the biggest live events, Game Creek Video was on site for the final game of the American football season in Miami’s Hard Rock Stadium. The entire production village of Game Creek OB trucks onsite for the game and events – from Friday’s red carpet to Sunday night’s post-game – relied on RTS intercoms for the critical communications that tied everything together.

“Basically, we provide the infrastructure for our clients,” says Jason Taubman, Senior VP, Technology for Game Creek Video. “From opening night on Friday through Sunday night’s live coverage, Game Creek Video was responsible for basically every bit of video you saw on Fox television from Miami.” 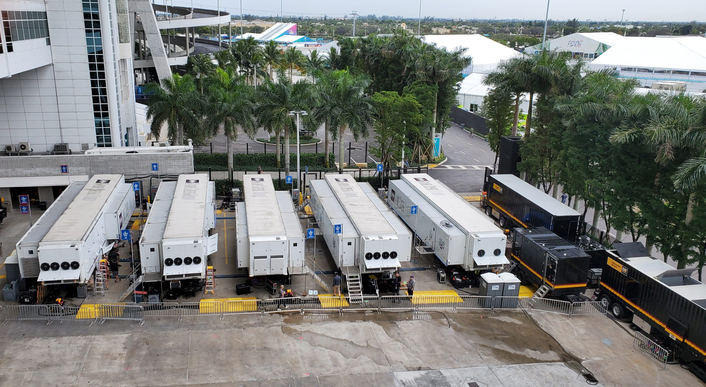 All intercoms were by RTS, with ADAM and ODIN frames seamlessly linking all production elements, from Friday’s red carpet through Sunday’s post-game

Even the halftime show, which is covered by a separate production supplier, relied on Game Creek’s cameras. According to Taubman, this is one area where RTS intercoms played a critical role. “One of the things we have to do is swing the camera communications back and forth between one production and the other,” he explains. “Making that switch to the halftime production and then swinging everything back to game coverage when it’s over is one trick we do with RTS that’s pretty cool.”

Game Creek uses RTS intercoms for its entire fleet of OB trucks, each of which has its own completely integrated comms system. All trucks are then connected to each other using RTS Tribus and Trunking technologies. The primary trucks on site were Encore A, B, and C (a three-truck system) for game coverage; Cleatus A and B for the pregame; and Bravo for the kickoff show, opening night, and as primary backup to Encore. Additional Game Creek support facilities brought the truck total to ten.

All the primary production trucks use RTS ADAM frames, while the newest support truck, Edit 4, sports the latest RTS ODIN frame connected via Dante/OMNEO networking. “The way we brought this all together was via OMNEO,” notes Taubman. “We put an OMNEO card in each matrix frame, then Dante networked everything so they could share ports. We also use RTS trunking to bring them all together, creating a network of well over 200 user stations across the production compound.” 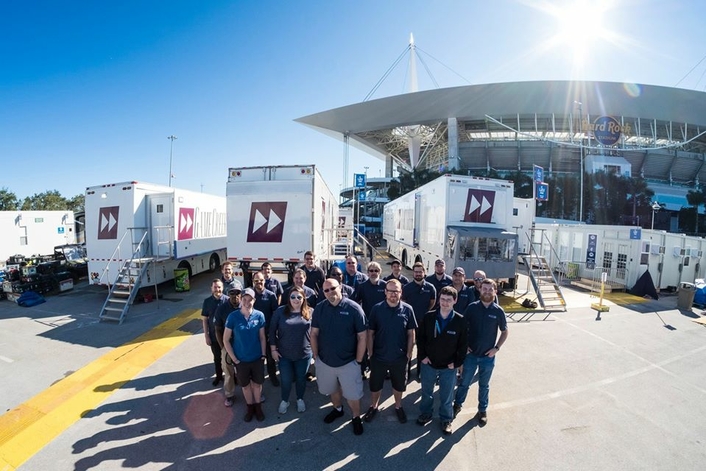 Those user stations use a variety of RTS keypanels, with the latest installations like Bravo using the new KP-5032 and KP-4016, while legacy models like the KP-32 serving the more established trucks. “That intergenerational compatibility is a key point for us,” notes Taubman. “One of the reasons we have stayed with RTS is that we can connect our oldest system to our newest system without a whole lot of drama.”

As SVP Technology for Game Creek, Taubman appreciates the quality, flexibility and reliability that RTS provides. “Comms is a very underappreciated skillset. You can have great video and audio, but if you can’t talk to each other, nothing works,” he says. “This year’s game, and all the events surrounding it, went exceptionally well. Nobody noticed how smoothly the comms worked which, frankly, is the highest compliment I can give to RTS.”