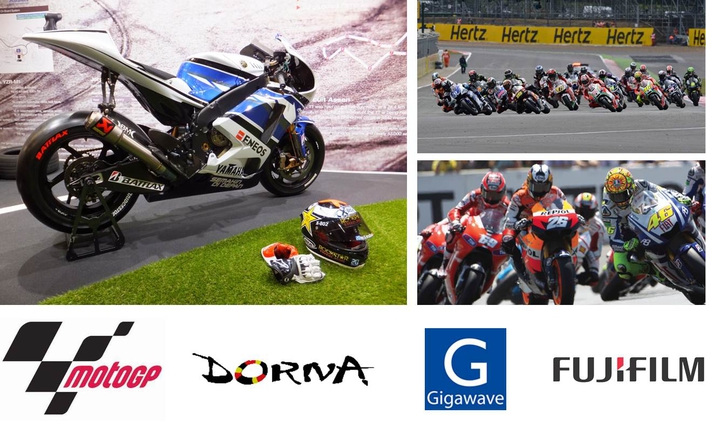 .
At this year’s International Broadcasting Convention in Amsterdam, MotoGP™ rights holder Dorna Sports and Fujifilm have proudly exhibited its first joint-collaboration miniature lens, which has been implemented in the High Definition OnBoard footage seen since the start of the 2012 season.

The MotoGP™ World Championship is one of the world's most watched sporting events, as well as one of the most demanding to produce, with more than 120 cameras in operation during 12 hours of live coverage, watched by more than 320 million viewers in over 200 countries.

During the IBC2012, the world’s biggest Broadcast Exhibition held at RAI Amsterdam from the 6th to 11th September, the Fujinon TV Lens model HF6SA-3 for 1:2/6mm sensors, was on display within the HD Gigawave OnBoard Camera model DOBD Series Miniature, mounted on Jorge Lorenzo’s Yamaha YZR-M1 MotoGP bike.

Particularly in motorcycle racing, OnBoard footage is a vital component of the broadcast package, giving viewers first-hand experience of racing on a knife-edge in this adrenaline-packed sport. It is however this harsh operating environment that can throw up the greatest challenges, particularly when mixed with state-of-the-art electronic media technology. Yet whether it is coping with bike vibrations resulting from forces over 300G at over 340kmh, full-lean cornering, or adapting to the numerous manufacturers of motorcycles on the grid – Fujifilm has delivered a product unrivalled in the marketplace.

Manel Arroyo, Managing Director of Dorna’s Media Area, is extremely pleased with the collaboration with Fujifilm: “Ever since we had the idea of HD OnBoard footage, Fujifilm began studying innovative solutions and has since delivered a high quality product in an area that is vitally important to MotoGP™. To create a lens that copes under such severe conditions is nothing short of exceptional, and I’m pleased that we have to opportunity to show it to the world at this year’s IBC2012.”

Andreas Adler, Senior Vice President Fujifilm Europe GmbH, Optical Devices Division states: “Dorna has a well-deserved reputation for shooting and producing high-quality live coverage of motor sports. We are extremely pleased to serve Dorna in all their production endeavours, and will continue to provide them with the best quality optics, reliability, and customer service. Fujinon HD lenses are the perfect complement for today's new HDTV cameras because they maintain the superior imaging standards and optical performance that Fujinon is known for. We’re particularly excited to be involved with the breath-taking images that Dorna produces with the OnBoard cameras at MotoGP™. The lenses for the on board cameras have been exclusively designed and given the extreme weather and challenging conditions they are used in, is a testament to the true durability and reliability of Fujinon lenses.”