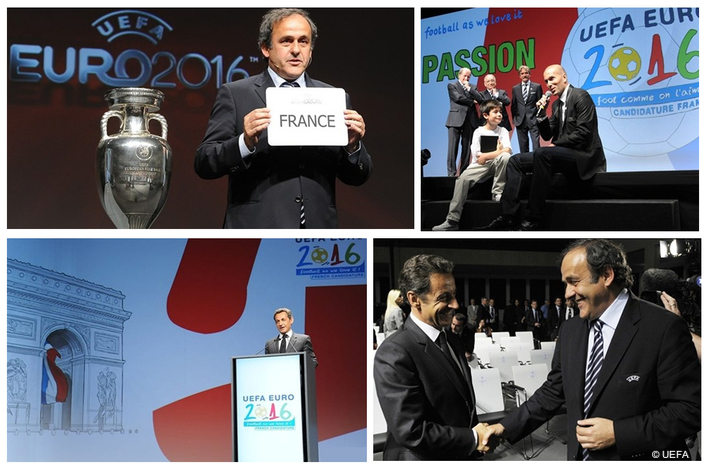 UEFA EURO 2016 will be the first edition with 24 teams competing in the final tournament, as a result of the decision taken by the UEFA Executive Committee in September 2008 in Bordeaux to expand the format of the competition.

Following the final bid presentations of the three bidders, Turkey, Italy and France, the UEFA Executive Committee deliberated and voted to select the hosts of UEFA EURO 2016. In the first ballot, the thirteen members of the UEFA Executive Committee entitled to vote were asked to list the bidders by order of preference. The bidder ranked first received five points, the secondplaced bidder received two points and the third-ranked bidder received one point.

Consequently, the bids of France and Turkey entered the second ballot, where simple majority was required, with each of the thirteen members of the UEFA Executive Committee able to vote for one candidate.

As a consequence, the bid of France was nominated to host UEFA EURO 2016. Further to the announcement of the successful bid, UEFA President Michel Platini, said: “Today, France has been chosen by the UEFA Executive Committee to host UEFA EURO 2016 and they are surely a worthy winner. I would like to pay tribute to the unsuccessful candidates for all the effort and hard work they have put in preparing excellent bid dossiers to host this prestigious European football tournament. The quality of the bids clearly shows the importance of the UEFA European Football Championship and the very strong desire that countries have to organise such a top-class football event. I also would like to thank the political authorities and the football fans of the candidate countries, who have all given tremendous backing to their respective bids.”