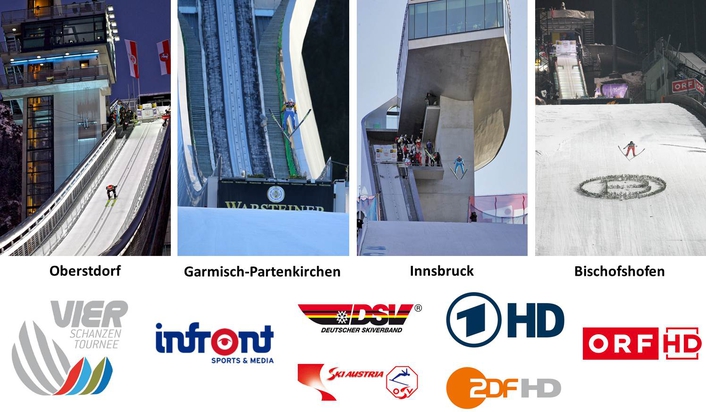 The new developed sponsoring concept of Infront consists of a reduced number of sponsor packages – five instead of nine – and does not imply a title sponsor. For the first time in a long while this international event is presented as „Vierschanzentournee“ (Four Hills Tournament) without a sponsor in the title. Now a presenting sponsor can associate himself comprehensively with the event. In the context of this realignment the internet presence will change, too: in the future the event will be available via

The tournament`s President, Alfons Schranz succeeding the former President Claus-Peter Horle (Oberstdorf) points out: „ With these marketing measures underlining the single brand identity of the Four Hills Tournament we usher in a new era. Now we visualize what we already are for many years: the most important yearly winter sport event of the world.”

Bruno Marty, Executive Director in the sector of winter sport at Infront explains: „Our concept for the new brand focus on consistency and clarity. This approach has already been introduced successfully across other prestigious sports events.” The new marketing identity is supposed to strengthen measurably the appeal of the tournament as one of the most important highlights of the winter sport calendar. Marty adds: „For commercial partners this means that they can combine their brands with a clear and consistent image appearance of all four events.”

Within the „Corporate Identity“ of the tournament each event gets an own colour version of the logo (Oberstdorf red, Garmisch-Partenkirchen light blue, Innsbruck green and Bischofshofen dark blue), while the main logo includes all four colours. 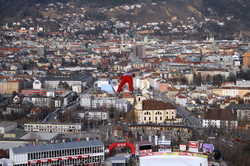 The new concept goes down well: the outdoor specialist Jack Wolfskin, the tournament`s title sponsor since 2006/2007 adhered to his engagement and booked two of the new sponsoring packages for the new season.

The reorganization from one title sponsor to presenting sponsors also went down very well with all partner clubs. Stefan Huber, Manager of the Four Hills Tournament is delighted: „Finally we have a certain planning security for the coming years, as we are more independent regarding the visual presentation of the Four Hills Tournament. This is how we are able to build up a really clear brand identity for the future.”

With 500 employees and 23 subsidiaries in 10 countries, Infront Sports & Media is one of the leading international full-service sports marketing agencies. It has its headquarters in Zug, Switzerland. Infront is one of the world’s strongest, most experienced agencies in winter sports, representing six of the seven international Olympic winter sports federations. The Group is a commercial partner to over 90% of all national skiing federations that organise the Alpine and Nordic disciplines of the FIS World Cups. Infront has been a partner of the International Ice Hockey Federation World Championships for many years. The company also has extensive involvement in biathlon, bob-skeleton, curling and luge events.

The Four Hills Tournament
The Broadcasting of the Vancouver Olympics