The Formula One Test Weeks 2016 in Barcelona 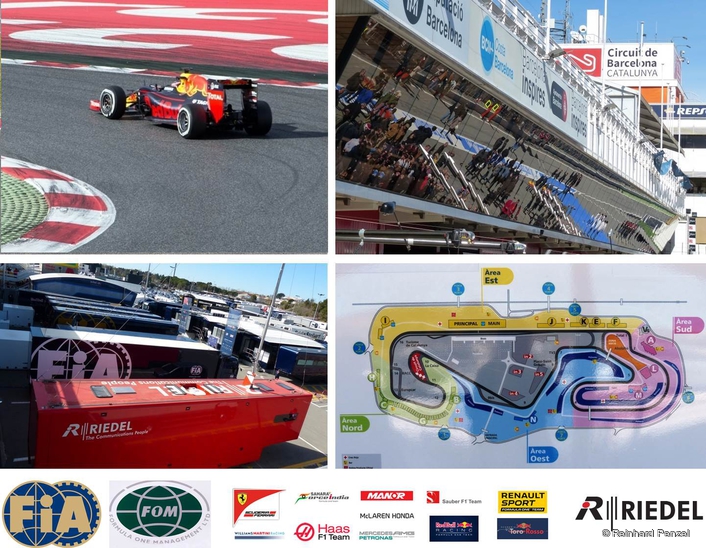 Since Formula One World Championship’s inception in 1950, the sport has always sought to innovate, constantly pushing the technological boundaries in order to find the quickest and safest route to victory. Riedel has been supplying systems to motorsports events since 1993. Today, Riedel serves all Formula One races world-wide with specialized radio-, intercom- and camera-systems for the FIA race control and various racing teams. Despite the ear-piercing noise at the racetrack, these systems enable failure-free communications between race control, teams and drivers and help FIA to control if the teams perform according to the rules and follow possible penalty decisions of the race control stewards.

The 2016 Formula One season is the 67th season of the FIA Formula One World Championship and is recognized by the sport's governing body, the Fédération Internationale de l'Automobile (FIA), as the highest class of competition for open-wheel racing cars. In 2016 teams and drivers are scheduled to take part in 21 Grands Prix - making for the longest season in the Formula One sport's history - starting in Australia on 20 March and finishing in Abu Dhabi on 27 November as they compete for the World Drivers' and World Constructors' championships. 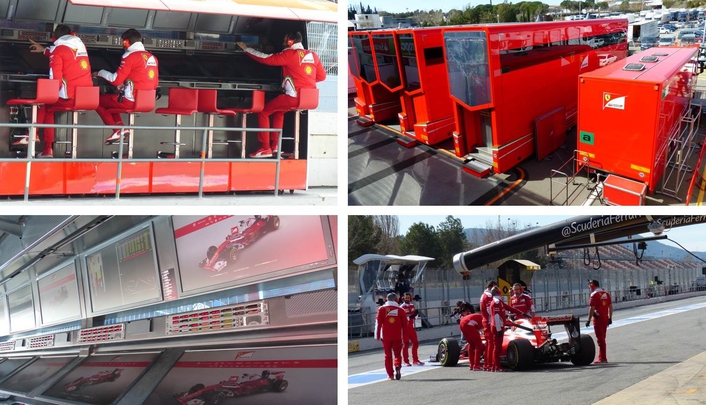 The Ferrari Command Stand at the Pitwall in Barcelona

The 2016 season will see the grid expand to 22 cars with the addition of the Haas F1 Team entry. Renault returned to the sport as a constructor after a four-year absence following their takeover of Lotus prior to the start of the season. The calendar has similarly expanded, with the return of the German Grand Prix. The European Grand Prix will also be revived, with the event visiting a new circuit in Azerbaijan.

Before the Teams left their home bases for the Australian Grand Prix they all got together for the only pre-season tests at Barcelona’s Circuit de Catalunya for 8 days across 2 weeks. The two Sessions took place from 22nd to 25th February and from 1st to 4th March. These test weeks also were the unique opportunity for Riedel to crosscheck the communications infrastructure which has to work bulletproof for the 21 races across 5 continents and in severe weather conditions – rain, extreme heat, cold and humidity.

Intercom – RiFACE: all eleven Formula One teams work with Riedel
Riedel’s Artist Intercom matrix has been adopted by FIA and the Formula 1 teams as the standard communication platform for the 21 Formula One World Championship races in 2016. It is used to connect FIA race control, stewards, the Safty Car, the Medical Car, the pit crews and the drivers – which totals to more than 2,000 walkie-talkies in operation during a race weekend. 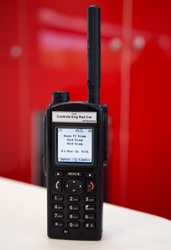 The seamless integration of wired and wireless systems, the securing of 100 % tap-proofness and the networking of various team structures require extensive experience in the system planning of high-quality equipment. Riedel’s Artist digital matrix intercom platform provides this maximum on flexibility and reliability. The tight relationship of Riedel’s rental business with Riedel’s manufacturing department places the company in the unique position to furnish customized systems directly from the factory. Looking into Formula 1 team communications, a typical intercom system incorporates two to four Artist nodes, which are connected over a redundant fiber ring to form one non-blocking matrix. Communication between team and driver is – of course – wireless. An especially developed intercom interface, which is geared to work even under the extreme F1 racing conditions, allows for pristine communication between the drivers and the teams.

RiLink – five of eleven Formula One teams work with Riedel
In addition to the communication on the race circuit the teams require communication links with their factories and engineering teams, most of which are located in the UK, France and Italy. To serve this demand Riedel has setup a secure WAN MPLS (multiprotocol label switching) connection for the teams, directly from the circuit to the mission control in their headquarters. This is monitored 24/7. The service completely bypasses the mainstream internet so there is no fall time and no time waiting to reach a host because, this is a completely dedicated point-to-point connection. Riedel’s RiLink Global Fiber Service provides bidirectional links between the race circuit and the headquarters, allowing not only the transport of 3G/HD/SDSDI broadcast signals, but also return video feeds, full-duplex communications, VoIP telephony and IP data (e.g. telemetry). 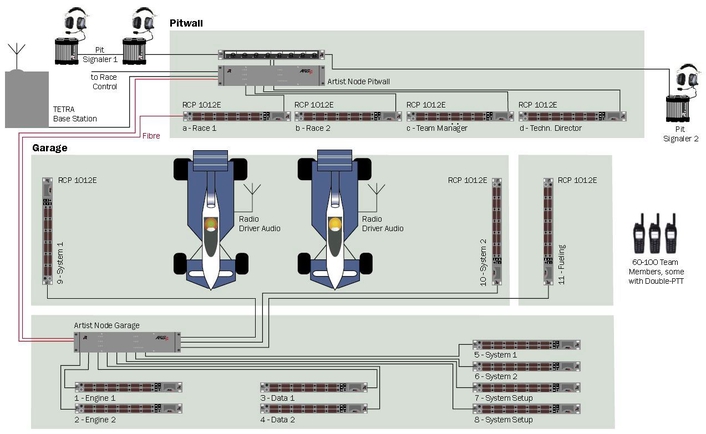 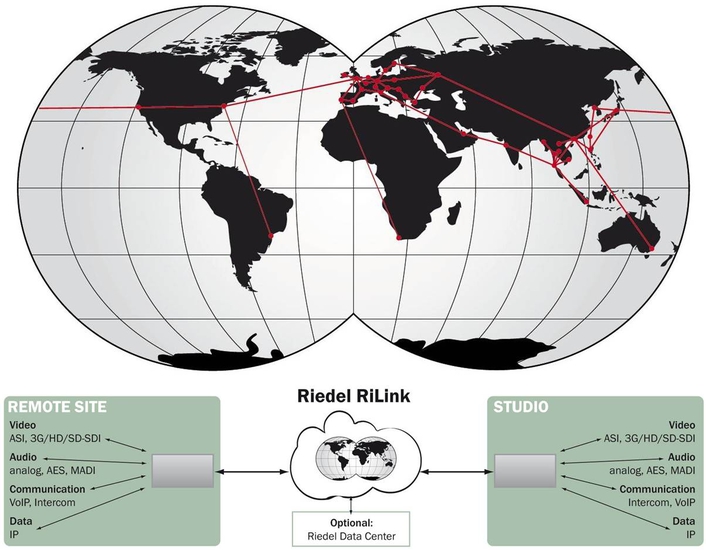 RIDAR – Race Incident Detection and Review System
Riedel also provides a video recording service for FIA. Riedel supplies a custom-built carbon fiber race control container which travels to all F1 Grand Prix races so that the operators know exactly where all the buttons they need are located.  The carbon fiber chassis is designed to cope with the rigorous and hectic F1 touring schedule, which takes in race locations ranging from Brazil to Canada and Europe to Australia. A hard disk recording system (+ backup) as well as a data logger is part of the installations in the container. 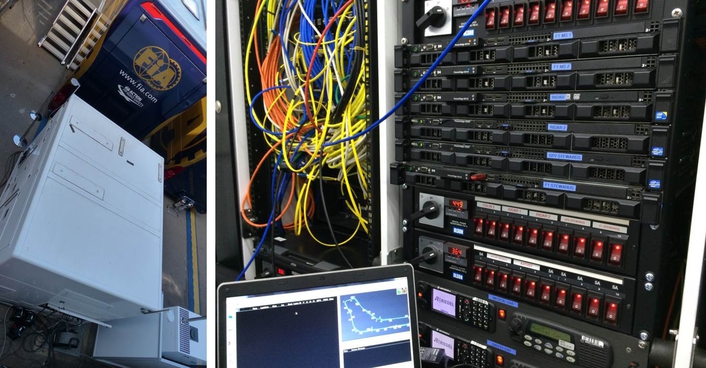 Riedel extends the eyes and the ears of FIA
The recorded material (synchronized by time code) is taken from about 20 camera positions around the track (operated by the host broadcaster FOM) but also additional closed circuit cameras providing the race director with full visual coverage of the track. These additional cameras are also provided by Riedel and include a wireless camera on every race car (safety regulations), a camera above the pit stop area of every team (to control possible penalties), a camera above every car when its parked in the pit (park ferme regulations) and about 5 cameras along the pit lane to document possible incidents – in total this are additional 60 cameras. Footage from each camera, the telemetry data of each car as well as the audio from the radio communication between the teams and their drivers are recorded onto a 7TB hard drive system. The race officials at FIA can then re-visit all the events of the race as it happened, enabling them to award any necessary penalties for infringements of the rules as well as to ensure the safety of the drivers. For peace of mind all the data is not only recorded on the two servers in the container but also in parallel on two servers in Riedel’s data center in Wuppertal. 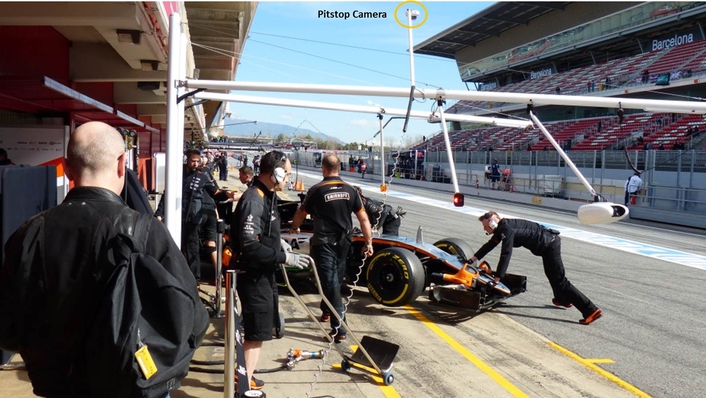 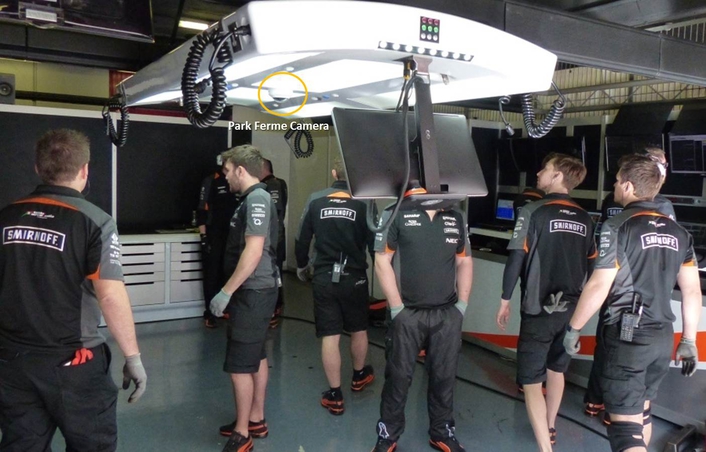 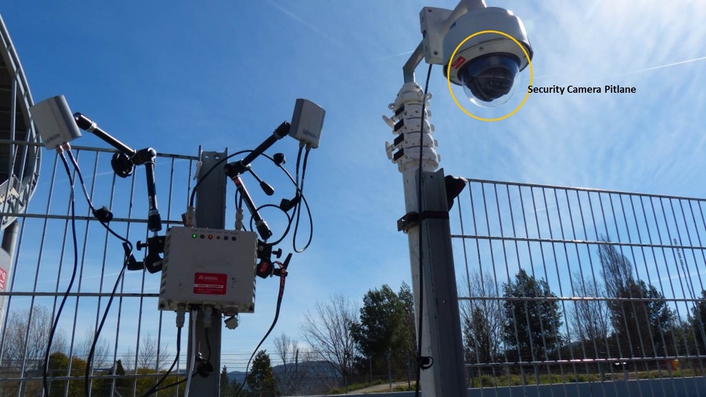 When an incident has occurred which endangers crew, spectators or the drivers themselves the safety car is called on to the track. The F1 cars must remain behind the safety car and are not allowed to overtake during this period. Once the incident has been resolved, the safety car returns to the pit lane and the race continues. Maintaining contact between the safety car and the race control is imperative. Riedel also has to ensure that nothing fails if the race control has to send out the medical car. This is why Riedel has implemented three separate radio intercoms in the safety and medical cars to make sure they can be reached. As well as the three separate intercoms, each driver also has a regular walkie-talkie handset located inside their car's cockpit. There are two push-to-talk buttons on the dashboard, so in case one fails, the driver has access to another.

When everything runs smoothly the system is invisible. It is only when there are complicated questions to be examined that the spotlight shines on those involved. With more complicated matters, investigations take place after the race, to allow the teams and drivers to have their say.

FIA Central Control Room with a Dedicated Monitor Wall Developed by Riedel
Lit by the glow of 58 television screens and by a battery of computer monitors that spit out lap information and display the position of every car on track everything is monitored and F1’s “Big Brother” casts an ever watchful and increasingly sophisticated electronic eye over every turn of a wheel. This monitor wall is connected to the race control container. 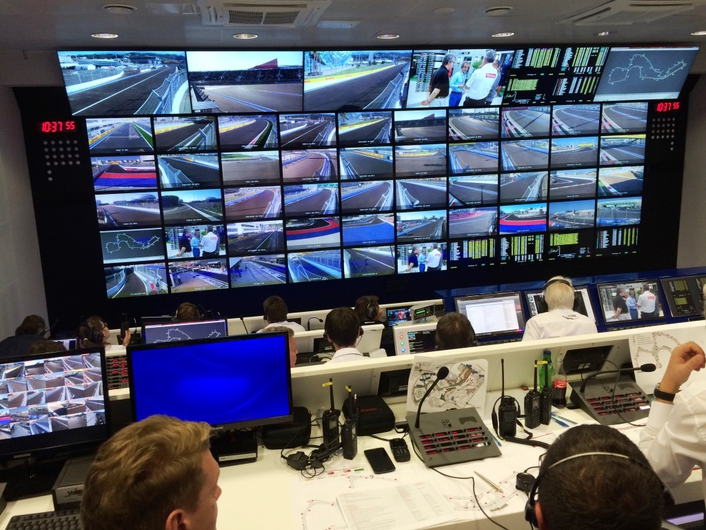 The FIA Monitor Wall is Connected to the Race Control Container

Pure Cable with Neutrik Connectors
The wired intercoms employ a special ruggedized fiber cable made specifically for Riedel. If you lay a cable for a permanent installation it is likely to continue working without any assistance. But if you lay a cable, remove it, ship it and re-install it 20 times in a year, it really needs to be heavily ruggedized. In total there is around 8km – 12km of cable weaving around the garages, pit lane and the race official's control room in a fully redundant system, meeting the zero-failure standards expected by Riedel's high-profile clients. This redundant fibre ring is set up by Riedel technicians and is constantly monitored before, during and after a race so that if something fails Riedel can react immediately. 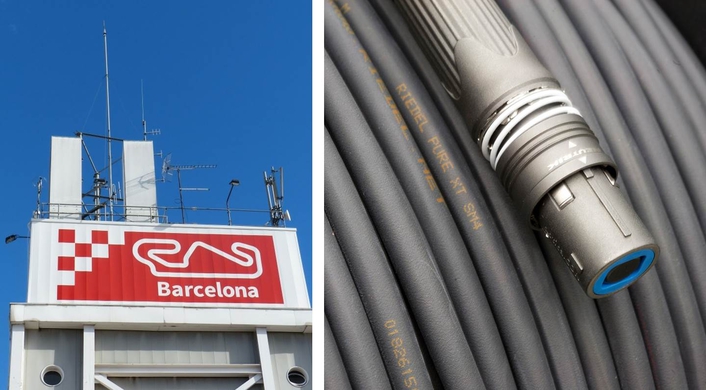 Antennas for Wireless Communication and the Pure Cable with Neutrik Connector

In total, Riedel freights around four tones of communications equipment from venue to venue. Under the direction of Dario Rossi, Riedel’s Head of the Motorsport Division, a team of 17 Riedel engineers are on location to support FIA (seven) and the Formula One racing teams (eight). Since last weekend the Riedel team is in Melbourne in Australia to again guarantee pristine communication between the drivers and the teams and between the teams and FIA.

Dario Rossi, Riedel’s Head of the Motorsport Division and his F1 App 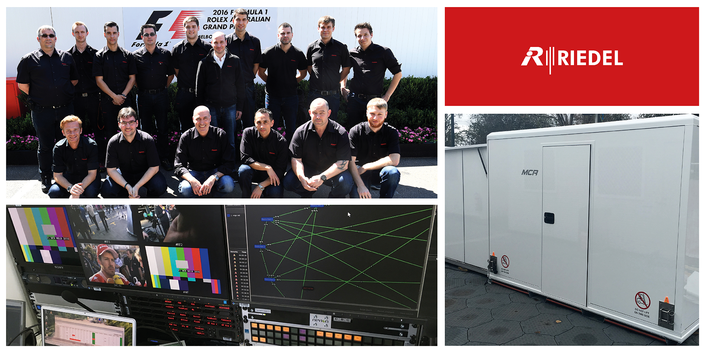 This year's first F1 Grand Prix in Melbourne is over: Congratulations to Mercedes for their head start, to the new Haas Team for 8 points and to RTL for the very first full remote production with MediorNet.