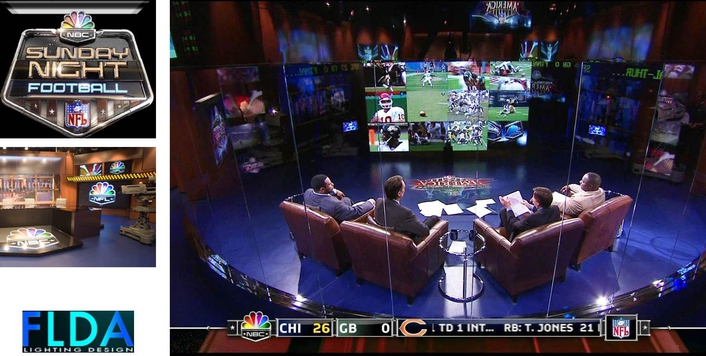 FLDA Helps Bring a New Look to NBC’s NFL Franchise
Ferri Lighting Design & Associates (FLDA) today announced that it has designed the lighting for the new ‘Football Night In America’ set, at NBC Sports in Stamford, Connecticut. The set is part of the NBC Sports complex in Stamford, for which FLDA designed the lighting in 2012-2013. NBC’s new set has its debut on Sunday, September 7th, with the opening NBC ‘Sunday Night Football’ game between the Indianapolis Colts and the Denver Broncos.

Based on FLDA’s familiarity with the NBC Sports facility, the ‘Football Night In America’ set takes advantage of what is the largest all-LED (light-emitting diode) broadcast studio configuration in the industry. The design has created an energy-efficient operation for what are now the home of NBC Sports and NBCSN, encompassing four studios and one newsroom.

FLDA has also designed and installed the lighting for Telemundo Sports, part of the NBC Sports family, with a 100% LED set. Separately, FLDA has a long history with NBC overall, including groundbreaking work for CNBC, as well as ‘Saturday Night Live,’ ‘The Today Show,’ and ‘The Tonight Show Starring Jimmy Fallon,’ among many others.

“We have an insider’s view of the NBC Sports facility, and found it a rewarding challenge to light the new 'Football Night In America’ set, leveraging what we had originally designed,” said Bruce Ferri, senior designer for FLDA. “The NFL is a significant part of the NBC Sports portfolio, and the new lighting reflects this, in our view.”

FLDA’s Emmy Award-winning team has achieved renowned reputation for its sports studio installations over the years, including multiple designs for ESPN, the MLB Network, and others. FLDA has a long history with NBC, including groundbreaking work for CNBC, MSNBC, as well as NBC Nightly News, ‘Saturday Night Live,’ and ‘The Today Show,’ among others.