Five Days to the Opening of the Winter Olympics in Vancouver 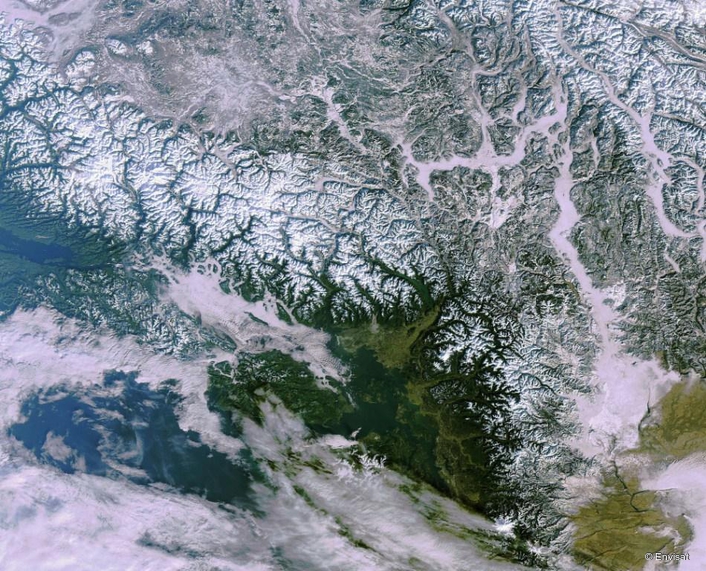 2010 Olympic City, Vancouver, Canada
This Envisat image features the city of Vancouver in the Canadian province of British Columbia. Vancouver, the third largest city in Canada, is the Host City of the 2010 Olympic and Paralympic Winter Games from February 12-28.

The geographical diversity of the area lends itself to an array of athletic activities. In addition to the city itself, other venue sites include Whistler (125 km north of Vancouver), Richmond (south of Vancouver) and West Vancouver (northwest of Vancouver).

Spectators from around the world will gather here to watch some of the world’s top athletes compete in 15 winter sport events including ice sports, skiing and snowboarding events and Nordic events.

The opening and closing ceremonies, hockey, figure skating and speed skating competitions will be held in the city of Vancouver. Whistler will host the biathlon, ski jumping, cross country skiing, the luge, the skeleton and the bobsled competitions. Most speed skating events, as well as several medal ceremonies, will take place in Richmond (south of Vancouver). The freestyle skiing and snowboarding competition will take place in Cypress Mountain, a downhill ski slope rather than a mountain, in West Vancouver.

The snow-capped Coast Mountains visible northeast of Vancouver extend from southwestern Yukon through the Alaska Panhandle and virtually all of the Coast of British Columbia. The Frasier Plateau is visible just beyond the Coast Mountains.

The Cascade Mountains (lower right) extend from southern British Columbia through Washington and Oregon to Northern California. A part of the Pacific Ring of Fire, all of the known historic eruptions in the continental U.S. have been from Cascade volcanoes, including the major Mount St. Helens eruption in 1980.

Also visible in the image (lower right) is the northern part of Washington, the contiguous U.S.’s most northwestern-state.