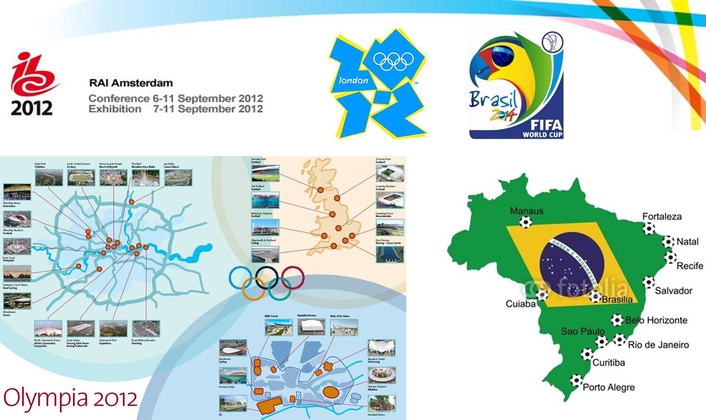 .
Live sports are a crucible for new production techniques, but the competition to win ratings remains fierce. With exclusive behind-the-scenes analysis of the London Olympics and a preview of FIFA World Cup 2014, IBC kicks off debate surrounding the technical, economic, and creative challenges facing international sports broadcasters in the year ahead.

Saturday 8 September 2012 Time: 09:30 - 11:00 Forum
First Look London 2012
In this first major post-Olympics forum, Barbara Slater, Director of Sport, BBC, compares notes with a distinguished international panel of broadcasters, recounting the challenges and triumphs of broadcasting the world’s biggest sports event. With privileged access to Olympic 2012 footage, IBC audiences will be the first people in the world to get a complete analysis of how it all went down behind the scenes, with particular emphasis on the unprecedented degree of multiplatform streaming.
·    Perspectives from Asia and the U.S. from Darryl Jefferson, Director, Post Production Operations and Highlights Factory Project, NBC; and John Barton, Director of Sport, Asia Pacific Broadcasting Union
·    What are the implications for Brazil 2016? Find out from Pedro Rolla, Global Media Director, Terra

Saturday 8 September 2012 Time: 11:30 - 13:00 Forum
Glimpse the Future of Sports Broadcast
Sports coverage is evolving from linear edited feed into a user-controlled package of on-demand replays, clips, live streams, and rich, graphical data on second screens, in the home and in stadia. Showing what is possible today and what can be achieved tomorrow are visionaries in sports technology.Join Luc Doneux, Head of APAC, EMEA & Events, EVS; Jim Irving, Commercial Director, Deltatre; and Eisuke Tsuyuzaki Chief Technology Officer, Panasonic, as they disclose details of their Olympics 2012 experience after months of pre-Games secrecy.

Brazil 2014: The Road To The Next FIFA World Cup

Saturday 8 September 2012 Time: 14:00 - 15:30 Forum
Detailed World Cup 2014 Plans Revealed
Production planning is already advanced for the next major global sporting event on the calendar: the 2014 FIFA World Cup. With goal-line technology greenlighted for the tournament, we look at the technical and logistical challenges of delivering this massive media event in a country the vast size of Brazil.Will Super Hi-Vision make an appearance? How many matches will be transmitted live in 3D? What new innovations in production and presentation can we expect? The only people with all the answers - Niclas Ericson, Director, FIFA TV, and Francis Tellier, CEO of FIFA's host broadcaster - are ready. Ken Kerschbaumer, Editorial Director, Sports Video Group, will chair this session.

Saturday 8 September 2012 Time: 16:00 - 17:30 Forum
Go Live With the London Games
The Olympics have long been the ultimate in appointment television but, rights holders and streaming-media specialist combined to give audiences unprecedented on-demand access to London 2012. Go under the bonnet of one such enterprise devised by iStreamPlanet and Haivision for broadcasters including RAI and RTE in this special sponsored session.

The Business Of Live Production: Is Transformation Overdue?

Saturday 8 September 2012 Time: 16:00 - 17:30, Room E102
Does 5D Make Sense for 3D?
Live events still drive premium-value programming, but their production is under increasing financial squeeze. Nowhere is this more apparent than with 3D, where broadcasters are having to juggle the perception, and sometimes reality, of extra costs and potential impact on the 2D show.Is 5D, the joint 2D/3D approach adopted by sports broadcaster ESPN the solution? And if so, how can it be achieved? Get behind the marketing hype with speakers including the President and CEO of Grass Valley, Alain Andreoli, in this essential nuts-and-bolts session which has implications beyond sport for any producer shooting live TV. Ken Kerschbaumer, Editorial Director, Sports Video Group, will chair this session.