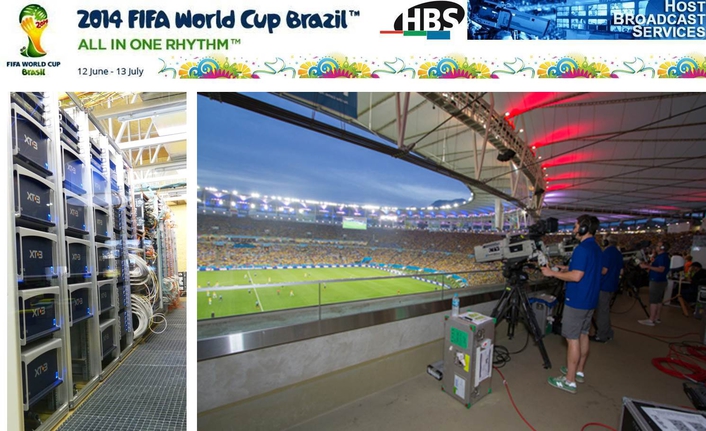 Maracana Stadium in Rio has one more match to go before it closes out not only its 2014 World Cup experience but the entire event as it will be home to the ultimate showdown: the final between Argentina and Germany on July 13. With 63 football matches already played in 12 disperate venues in 12 disparate cities across a massive and beautiful nation that is still struggling, in many corners, to enter the third world, there were plenty of  challenges for FIFA TV and HBS.

They included providing fiber-based connections to dozens of ENG crews scattered across the country so that they could file feature stories and team reports; building out an IBC facility outside of Rio that would not only provide a safe and technically secure home for more than 80 media rights holders but also have ample backup power as well as connectivity to broadcast facilities around the globe; and embracing “next generation” EVS workflows that, for example, allow production staff around the globe to browse low-res proxies of thousands of hours of content, make edit decisions, and have high-res files delivered seamlessly. 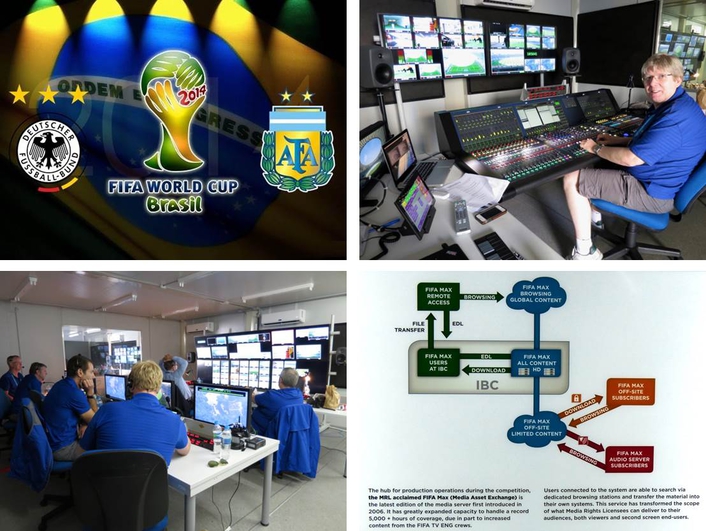 Final preparations at Maracana have started: MRLs around the world will access the FIFA MAX Server

With around 4,200 hours of footage already in the bank, and more to follow with the final match of the tournament still to be played, there has been more coverage recorded for the 2014 FIFA World Cup Brazil™ than any other FIFA World Cup™.

The 3,500 hours recorded in South Africa four years ago have been eclipsed thanks in no small part to the new Clips Compilation Emotion Channel, which does exactly what it says on the tin – capturing the emotion of the tournament, the Daily Preview Show and other content which comprises the Production Plan. Fan footage has proved incredibly popular; ‘close-up’, ‘super slo-mo’ and ‘fans’ have been among the most searched for keywords in the FIFA Media Asset Exchange (MAX) Server by Media Rights Licensees (MRLs), proving that the introduction of the Emotion Channel has been welcomed. 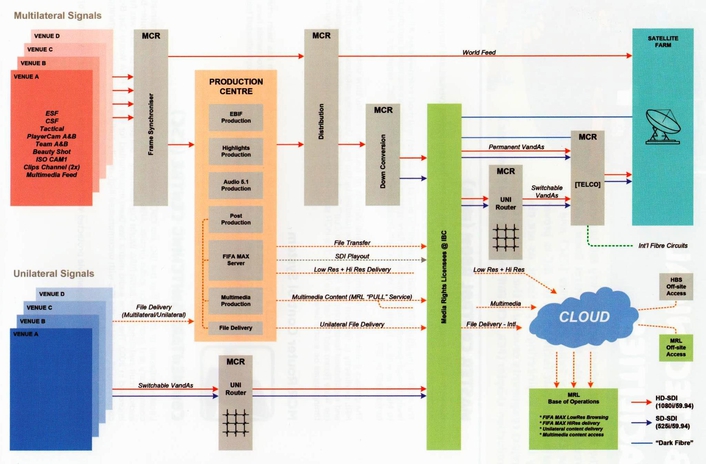 Another popular keyword which, of course, cannot be planned for, is ‘goals’ – although the myriad camera angles have provided viewers some magical pictures, much is owed to the players themselves who have smashed in an average of 2.7 goals  per match. Behind 'goals' come 'Messi', 'Lahm', 'celebration' and 'Neymar' in the list of most searched terms.

Images of fans have been among the most popular searches on the FIFA MAX Server, including the features produced on the road

Figures linked to the FIFA MAX Server, the vast library of clips which services MRLs’ broadcasting needs, show that as of 12 July, 232,000 files have been downloaded. Emotion and Action are, unsurprisingly, among the most popular, along with the Team Profiles and Story Features put together by the 41 FIFA TV ENG Crews who have worked at the event. In terms of clips downloaded, the Team Features have proven among the most popular, while team training has also proven popular with MRLs.

Closing ceremony to celebrate Brazil 2014 in style
Before the 2014 FIFA World Cup™ Final gets underway at the Maracana in Rio de Janeiro on Sunday, a special closing ceremony involving around 1,000 people will celebrate the greatest values of the globe’s most popular sport as the tournament nears its unmissable climax.

European heavyweights Germany meet South American contenders Argentina in the showpiece fixture of the competition in Brazil, but before the football kicks off and the champions are decided, an 18-minute show inside the stadium will pay tribute to the game and its key symbols. 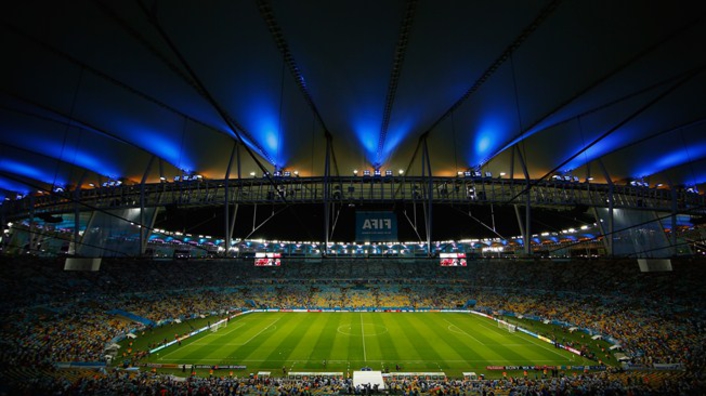 Beginning with an on-pitch expression of the sport’s values through four characters – Freedom, Solidarity, Passion and Diversity – the ceremony will subsequently include representations of all 32 teams to have participated at this World Cup, with particular focus on the two finalists: Joachim Low’s Nationalmannschaft and Alejandro Sabella’s Albiceleste.

Set to a soundtrack of samba music, incorporating a cast of 400 people and featuring GRES Academicos do Grande Rio, a special reference to the sought-after Trophy also takes centre stage, while a unique tribute to football symbolically brings together the two sides battling to be crowned winners when the full-time whistle is blown in Rio. 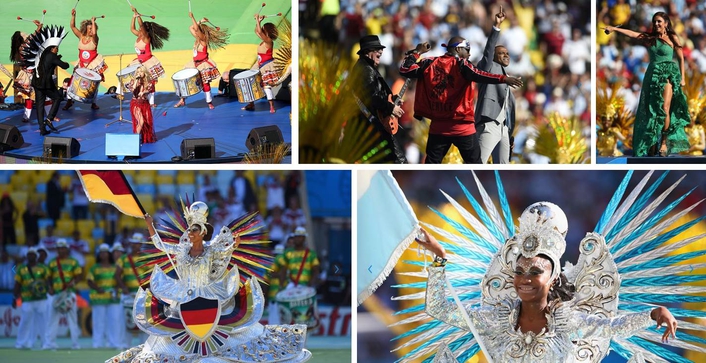 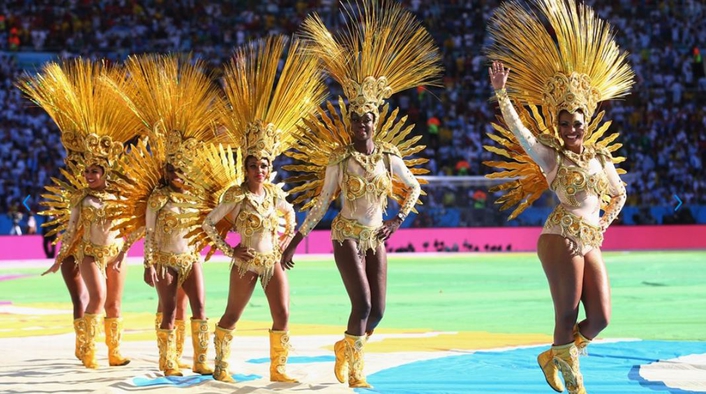 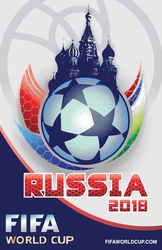 The Brazil 2014 closing ceremony will conclude with a spectacular combination of music: Shakira and Carlinhos Brown perform “Dare”; Alexandre Pires, Carlos Santana and Wyclef Jean provide a rendition of the World Cup official anthem, “We Will Find A Way”; plus, a medley of Brazilian songs courtesy of Pires and Ivete Sangalo.

A deep analysis of the 2014 FIFA World Cup in Brazil will follow the tournament’s conclusion and planning can begin in earnest for coverage of the 2018 FIFA World Cup Russia™, which kicks off in just 1,426 days…