12.2 million tweets were sent during Brazil’s win over Croatia
As the group stages in Brazil have come to an end, TV broadcasters are reflecting on an outstanding set of results from the first two weeks of the FIFA World Cup 2014.

The group matches have set new TV records in a number of markets, from Belgium to the US. Sales of television advertising and subscriptions have also benefitted.

For the first time, there is also evidence of “second screen” applications growing in popularity.

12.2 million tweets were sent during Brazil’s win over Croatia and several thousand viewers are watching the games on broadcasters’ streaming services. But the real story around ‘social media’ has been the growth in public viewing, reinforcing the role of mass audience television as the original “social” media.

The audited global figures will not be known for some time but broadcasters are already optimistic that the viewing numbers for the final on 13 July may approach or even surpass the 909 million who watched the Spain v Netherlands final in 2010. 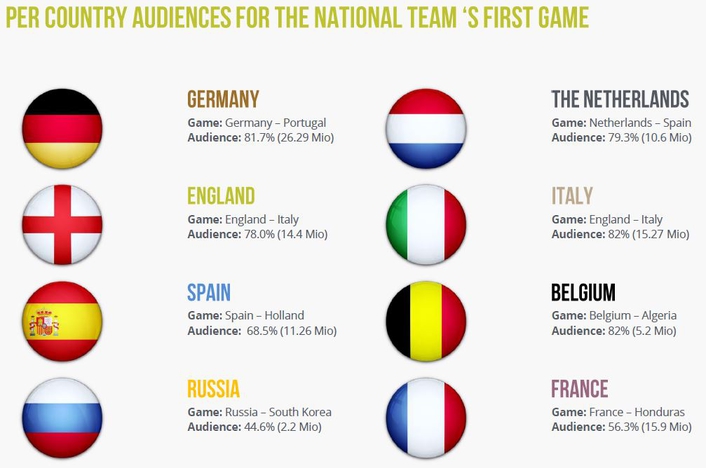 TOP AUDIENCE FIGURES half-way through the WORLD CUP:
·    A record number of 42.9 million Brazilians tuned in to see their team's win over Croatia. 81.3% of Croatians watched the game (1.5 million).

·    Brazil-Croatia was also the most watched opening match in at least 12 years in the UK, with 11.2 million UK viewers (records going back to 2002).

·    The match Belgium – South Korea was the most watched football game in the history of Belgian television, reaching 3 million Flemish fans (82.8% of TV viewers) and 2.1 million of French speaking Belgians (82.1%).

·    Viewing records were reported also in the UK: a peak of 20 million (71% share) watched England v Uruguay, the highest peak audience on any channel since the 2012 London Olympics.

·    68.5% of Spanish viewers (11.2 million) caught the game in which their national team was defeated by Holland.

·    The French victory over Honduras scored 56.3% audience share in France or 15.9 million viewers, amongst whom 1 million saw the game on digital platforms.

·    Even in countries such as Sweden, where the national team didn’t qualify, the World Cup gathered up to 2.64 Mio viewers (48% audience share) for the game of Brazil against Mexico, also with impressive figures online, TV4 reporting up to 130 077 streams on their platform for the game of Spain against Chile.

·    The US’s first game drew more than 11 million viewers - the highest-rated football match ever shown on ESPN - and nearly 5 million on a Spanish-language network.

·    Even an 8 a.m. broadcast of Australia’s match against Chile didn’t discourage 2.3 million Australians from watching the game. 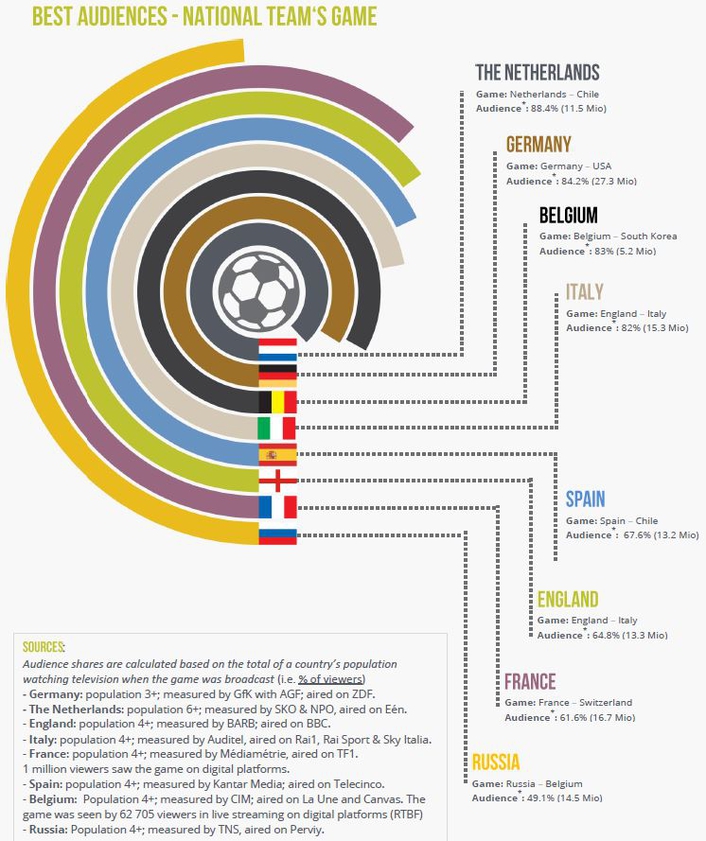 More impressive TV figures as World Cup enters knockout
Nine out of every ten people watching Dutch television during the Netherlands match against Mexico were glued to the game, with Ned 1’s live coverage attracting an average audience of 8.1 million viewers.

An average of 3.1 million people watched Greece lose on penalties to Costa Rica on NERIT, the biggest Greek TV sports audience of 2014.

The 2014 FIFA World Cup Brazil™ has also been breaking viewing records in nations not represented in the competition. Brazil’s win over Chile, broadcast on IBA 1 in Israel, attracted the biggest Israeli TV sports audience for more than two years.

Meanwhile, Univision reported the biggest ever audience for a Spanish language TV show in the USA for Mexico’s defeat to the Netherlands. An average of 10.4 million viewers watched the game in a further sign ofthe increasing popularity of the FIFA World Cup™ and football in the United States.

Belgian win attracts all-time TV viewing highs
Broadcasters in both the French and Dutch speaking parts of Belgium reached all-time record television audiences during Belgium’s last 16 showdown against the USA in the 2014 FIFA World Cup Brazil™. An average audience of 2.36 million people watched live coverage on Canvas in the Dutch-speaking part of Belgium. An average of 1.642 million viewers tuned in to RTBF1 in the French-speaking part of the country. Both figures were the biggest audience on record for any TV broadcast in their respective territories.

Meanwhile, some impressive figures from Latin America are also showing the growing popularity of the FIFA World Cup™ around the world. An average of 10.9 million viewers watched Colombia’s opening game against Greece on Caracol and RCN – more than 80 percent of the total TV audience during that time slot. 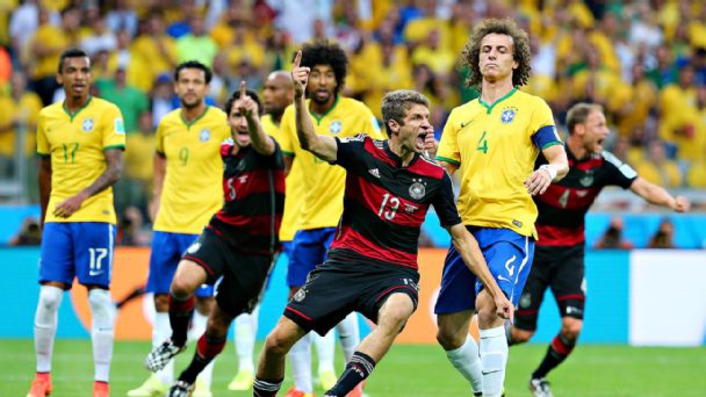 Semi-final breaks all-time German TV audience record
Germany’s semi-final match against hosts Brazil attracted the biggest German television audience in history, as 32.6 million people tuned in to live coverage on ZDF. About 9 out of 10 people watching television at the time in Germany were glued to the game.The match also achieved the highest number of viewers so far for the 2014 FIFA World Cup Brazil™ in Austria, the Czech Republic, Poland, Romania, Serbia, Slovakia, Slovenia and Turkey.

The match, won on penalties by Argentina, attracted an average, in-home viewership of 9.1 million on Ned 1 – the largest television audience on record for any type of programming in the Netherlands.

The Association of Commercial Television in Europe (ACT) represents the interests of leading commercial broadcasters in 37 European countries. The ACT member companies finance, produce, promote and distribute content and services benefiting millions of Europeans across all platforms.  ACT engages with the EU institutions to achieve a balanced and appropriate regulatory framework which will encourage further investment and growth in our sector.

egta is the association representing television and radio sales houses, either independent from the channel or in-house, that market the advertising space of both private and public television and radio stations throughout Europe and beyond. egta fulfils different functions for its members in fields of activities as diversified as regulatory issues, audience measurement, sales methods, interactivity, cross-media, technical standards, new media etc. During its 35 years of existence, egta has become the reference centre for television & radio advertising in Europe. egta counts 128 members operating across 37 countries.

SNPTV (The Syndicat National de la Publicité Télévisée) is a professional organisation of the French TV sales houses (TF1 Publicité, M6 Publicité, France Télévisions Publicité, Canal + Régie, TMC Régie, Next Régie, Lagardère Publicité, Be Viacom). SNPTV has for the main mission to collect the proofs, through collective studies, that the television is the undeniable media for the advertisers and their TV ads in terms of return on investment, construction of brand, fame, image …

Thinkbox is the marketing body for commercial TV in the UK, in all its forms – broadcast, on-demand and interactive. It works with the marketing community with a single ambition: to help advertisers get the best out of today’s TV. Its shareholders are Channel 4, ITV, Sky Media, Turner Media Innovations and UKTV, who together represent over 90% of commercial TV advertising revenue through their owned and partner TV channels.  Associate Members are RTL Group, Virgin Media, London Live, Norway’s SBS Discovery and Australia’s ThinkTV. Discovery Channel UK, UTV and STV also give direct financial support.

ABMA is the Belgian Association for Audiovisual Media.