The Confederations Cup will mark the second time GLT has been used at a FIFA competition
The use of goal-line technology (GLT) at the FIFA Confederations Cup 2013 moved a step closer with FIFA confirming the appointment of GoalControl GmbH as the official GLT provider for the tournament. GoalControl has held off competition from three rival firms to be appointed as FIFA’s official goal-line technology (GLT) paving the way for its system to be implemented at the 2014 World Cup.

England have been trumped once more on the football pitch by Germany, after Fifa plumped for GoalControl over Hawk-Eye in their choice of who will provide goal-line technology at the Confederations Cup in Brazil this summer.

England have been trumped once more on the football pitch by Germany, after Fifa plumped for GoalControl over Hawk-Eye in their choice of who will provide goal-line technology at the Confederations Cup in Brazil this summer.

GoalControl was not even formed in 2011, when the purchase of Hawk-Eye by long-time World Cup sponsor Sony Corp ahead of undergoing FIFA-endorsed tests suggested the English project was the favorite.

FIFA awarded GoalControl a licence for its GLT system GoalControl-4D. The system uses 14 high-speed cameras located around the pitch which are directed at both goals. The position of the ball is continually and automatically captured in three dimensions – using X, Y and Z co-ordinates – as soon as it approaches the goal-line. When the ball has completely crossed the line, the central analysis unit sends an encrypted signal to the referee’s watch in less than a second. GoalControl-4D can be used with both standard goalposts and balls. GoalControl and FIFA signed the initial licensing contract after successful tests in February at Dusseldorf’s Esprit-Arena and the Veltins-Arena in Gelsenkirchen.

The FIFA view and the UEFA view
The issue of goalline technology has been highlighted by a series of controversies in recent times, not least Frank Lampard's "goal" against Germany during the 2010 World Cup second-round tie in Bloemfontein, and John Terry's "clearance" from the line against Ukraine at Euro 2012. Both incidents arguably had a major impact on the respective contests, yet the Uefa president, Michel Platini, has remained a staunch opponent of its introduction, favouring instead a system of more officials standing behind the goal. 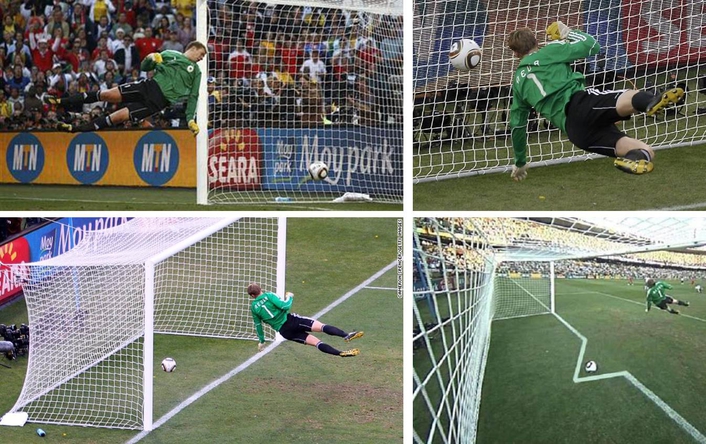 Had goalline technology been used at the last World Cup, Frank Lampard's strike against Germany in the last 16 would have stood

The Fifa president, Sepp Blatter, has not shared the Frenchman's scepticism and has pressed ahead with tests for the various systems this year.

The Confederations Cup will mark the second time GLT has been used at a FIFA competition, after the successful implementation of the technology at December’s Club World Cup in Japan. This followed the historic decision by the International Football Association Board (IFAB) to approve the principle of using GLT during a special meeting in July 2012.

This week’s backing for goal-line technology comes after UEFA president Michel Platini last week reiterated his opposition to the initiative by stating that its introduction into football would be a “historical mistake”. By contrast, FIFA president Sepp Blatter called the introduction of goal-line technology a “necessity” as co-host Ukraine exited Euro 2012 following yet another controversial incident. Ukraine was defeated 1-0 by England in Donetsk on June 19, but appeared to have legitimate claims for an equaliser turned down. The incident is one of a number of high-profile cases to have arisen in recent years.

John Terry's "clearance" from the line against Ukraine at Euro 2012

Platini, who is widely considered to be Blatter’s heir apparent, has made no secret of his preference for the five-official system being used at Euro 2012 over the use of such technology. Along with Euro 2012, the system has also been trialled over the past two years in the Champions League and Europa League, along with the Asian Football Confederation’s President’s Cup and competitions in Brazil, France, Morocco and Qatar. The IFAB also unanimously agreed that the use of two additional assistant referees be approved citing “the support they can provide in officiating football matches”.

Necessary Investments
GoalControl has been awarded the contract ahead of rival bids from Cairos Technologies, GoalRef and Hawk-Eye. As part of the tender, GoalControl is also set to be GLT provider for Brazil’s World Cup provided that the performance of the system during this year’s Confederations Cup meets all necessary FIFA requirements. A FIFA statement read: “While all four companies had previously met the stringent technical requirements of the FIFA Quality Programme, the final decision was based on criteria relating more specifically to the tournaments in Brazil, including the company’s ability to adapt to local conditions and the compatibility of each GLT system in relation to FIFA match operations. The respective bids were also judged on cost and project management factors such as staffing and time schedules for installation.”

“The unique features of our system are the outstanding flexibility and accuracy,” said GoalControl managing director Dirk Broichhausen.

“All current goal posts and white goal nets can be used without any modifications,” Broichhausen added. “Additionally, GoalContol-4D can be used with any existing ball. As an option, the system records the camera images from each goalmouth event for replays and calculates virtual 3D sequences of the ball movement. These images can be viewed from any virtual camera view point in order for spectators to see for themselves if the ball has completely crossed the goal line.” 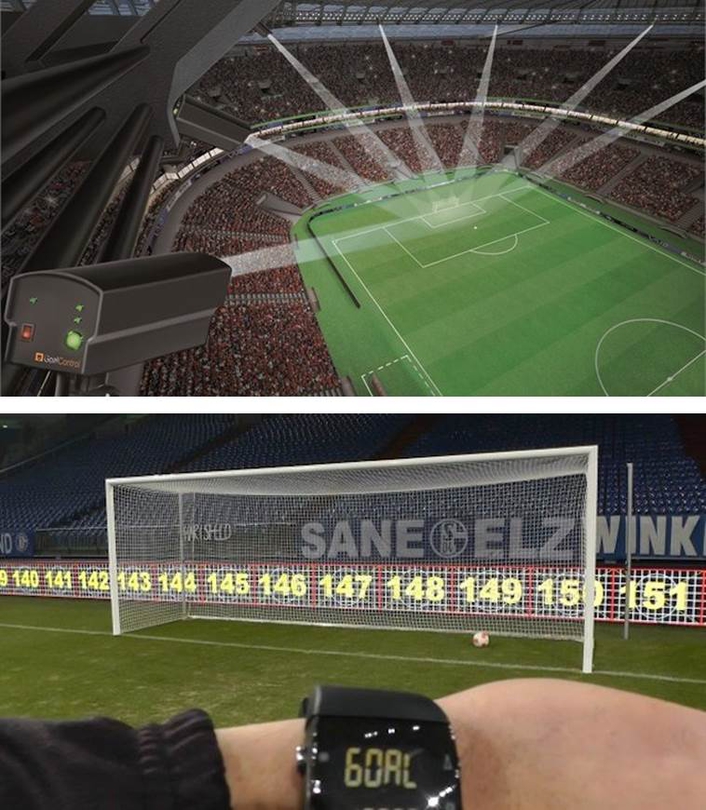 For the Confederations Cup, GoalControl has an agreement with rival firm GoalRef to use the same referees’ watches that were utilised during the Club World Cup in Japan. “The watches are the element that connect the goal line technology with the referees, so our intention was to offer a device that international referees have already tested and know from experience the ease of operation and reliability,” added Broichhausen.

The fight for other opportunities
GoalControl and Hawk-Eye – along with the two magnetic field-based systems (GoalRef and CAIROS) Fifa rejected – are also vying for what is arguably an even more important contract to supply the Premier League, the Bundesliga and other Football Associations from next season.

While losing out on the contract represents a blow to Hawk-Eye, it will compete again with GoalControl, GoalRef and CAIROS for the honour to provide a system for the 20 Premier League grounds and Wembley.

Another failure would be a huge setback for Hawk-Eye, which was generous in defeat.

“Sport teaches us many lessons, including accepting defeat graciously and having confidence in your ability to bounce back strongly,” it said in a statement. “Hawk-Eye wishes Fifa and the appointed goal-line technology supplier every success at the FIFA Confederations Cup 2013.”

GLT as part of in-game entertainment
After Blatter’s mind was changed in Bloemfontein three years ago, FIFA performed another U-turn last month when it withdrew previous opposition to publicizing goal-line rulings.

Now, competition organizers can choose whether decisions are shown to fans on big screens in stadiums and television viewers. In tennis and cricket, anticipation of a decision provided by Hawk-Eye has become part of the in-game entertainment.

”It’s not secret,” Blatter said on the sidelines of the IFAB meeting in Edinburgh. ”Once we have the technology and it shows it’s a goal or not a goal, we have to be transparent, otherwise there’s no need to do it.”

Referees still have the final say on awarding a goal, or even using goal-line technology when it is installed. Mandatory pre-game tests give match officials the option to switch off the technology if they doubt its accuracy on that day.

Hawk-Eye, GoalRef and Cairos will now seek to persuade other football clients, such as the English Premier League or German’s Bundesliga, to choose their systems before next season begins in August.

It is the result of restless development and countless hours of testing the system´s accurate ball detection and tracking function under all weather conditions. Tests that included all football types, different pitch grounds, various types of goal nets and game situations.

How it works
The GoalControl-4D system works with 14 high-speed cameras (7 per goal) around the pitch at the stadium roof/catwalk. The cameras are connected to a powerful image processing computer system which tracks the movement of all objects on the pitch and filters out the players, referees and all disturbing objects. The remaining object is the ball and the system knows its three dimensional x-, y- and z-position with a precision of a few millimeters in the coordinate system of the pitch. When the ball passes the goal line, the system sends a vibration- and optical signal to the officals´watches. Of course, all camera images of such goal event, and also of all near-goal events, are stored and can be replayed anytime.

About GoalControl
GoalControl is the specialist for real-time image analysis in sport events. Our team has many years of experience in developing and deploying camera-based vision systems that can detect, identify and track moving objects in complex sceneries, i.e. a football in three dimensions on a pitch.

With GoalControl-4D a system is presented that meets all FIFA criteria for goal line technology and that can assist the referees substantially with the decision "goal or no-goal". By means of 14 cameras mounted on the stadium roof/catwalk, the system captures the three dimensioal position of the ball with very high precision in the air and on the pitch. When the ball passes the goal line, all referees receive in less than 1 second a vibration- and optical signal at their watches.