Fanfare for Lawo amongst the Vuvuzelas 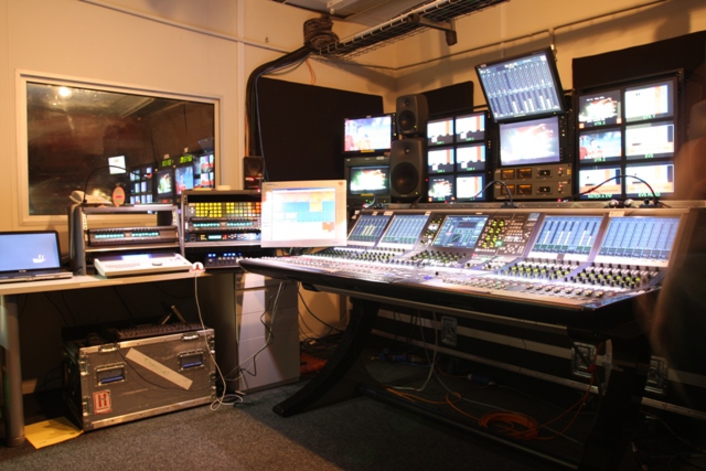 mc²66 console in the ITV studio control room at the IBC, Johannesburg

Lawo’s mc²66 digital audio console is at the heart of the world championship sound gathering, mixing and international distribution operation in Johannesburg, where broadcast audio engineers have had to cope with a problem unique to the host country – the vuvuzela! 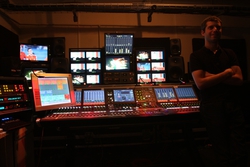 South Africa, the “Rainbow Nation”, has invited the world to their vibrant staging of the planet’s biggest football tournament. Overall responsibility for the production of the event’s international video and audio feeds lies in the hands of the Swiss company Host Broadcast Services (HBS), as it did for the 2006 tournament in Germany. The international feeds are supplied to broadcasting companies around the world, for use in their own reports and programmes.

Sitting in front of a Lawo mc²66 console, David Loudoun, freelance engineer and audio system designer, is covering the tournament for various national broadcasters including UK’s ITV. “I love Lawo desks. I’ve used them on a variety of projects including other sporting events and music programmes like Eurovision and Idol in Finland. I’m used to the power, the flexibility, and the seamless networking capability of the system.”

Loudoun was brought on board at an early stage by Lawo and ABS (Audio Broadcast Services) to help plan the complex workflows inherent on such a project. “One of the principle reasons for choosing Lawo as the centre of operations here is its open architecture. This feature was essential, as it became evident very early on that this massive event was beginning to grow! More and more feeds were being added, particularly on the comms. side, and from HBS, with more links needed for people to access the show. The Lawo accommodates changes like these really easily as it’s just a question of another DSP or I/O card - you just add what you need when you need it.”

Love them or loathe them, the vuvuzelas - those incessant, unrelenting, atonal horns “played” by fans all over the country – are part and parcel of these games. The Soccer City Stadium, near the IBC (International Broadcast Centre) where Loudoun is based for the duration of the tournament, has been enlarged to hold 94,700 spectators, and potentially 94,700 vuvuzelas!

“The sound of the vuvuzelas in the stadia is such a huge part of the World Cup here. They are a constant presence; they’re everywhere. They wake me every morning at 7 a.m.! It’s not just the football supporters either; it’s business people, security people, builders. Everyone is blowing them! The noise coming from the stadium during a match is immense, especially when African teams are playing. We heard from HBS that viewers had complained about how loud they were. To be honest we could easily have taken the option of running in other effects – crowd loops from other games that had more familiar cheering, chanting, or singing – and lowering the live vuvuzela mix, but we all agreed that this would compromise the integrity of the event and would certainly not be in the spirit of this incredible World Cup. Also it would seem ridiculous to viewers if players were complaining that they couldn’t hear the referee’s call because of the vuvuzelas but the audience at home couldn’t hear the horns on their televisions! After communication with the host broadcaster, we’ve been using notch filters on the Lawo to take some of the edge off the constant horn sound to soften it a little for our UK viewers.”

Loudoun details the basic workflow. “We built an MCR, along with two Sound Controls, a Gallery and offices. We are receiving signals from three Dallis frames: one in our local MCR; one is in our control room; and one in our studio over a kilometre away straight down a redundant fibre. This allows us to send not just the standard studio mics, but also to pass all talkback I/O, including IFBs (Interruptible Fold Backs), and is an easy way of getting other things that can travel that distance like timecode. We also have two AES cards in our frame taking in all our host grams, EVs, Tape, Avid, satellites etc . . . a lot of de-embedded sources. In addition we chose the mc²66 because we needed a lot of the inputs to be available on the surface. We were doing nearly all the processing utilising the on-board facilities. With the Lawo’s routing capabilities, when the demand for different content on the outputs changed, it was simple to go in and use the router to re-route stuff. It wasn’t a whole nightmare of re-plugging physical devices. If you need to change the layering on the mixer, the assignment is so easy you can change it in seconds and it doesn’t affect anything else.”

Loudoun is not dealing with surround as ITV is purely stereo, but the Lawo is designed to be able to route multiple delivery requirements – surround, stereo, mono, mix plus commentary, mix minus, effects only, etc. - simultaneously. He continued, “Most of the feeds from the host are coming down SDI. We put them into the Lawo and then create the required outputs like main mix and VT clean feeds, like clean commentary, or clean v/o. We are utilising all of our auxiliaries: generally these include comms and foldbacks. We’re sending, or creating, mono feeds to go up to our satellites to people on our roving destinations. I might put a comms on one leg of the AES and a mono mix on the other. Therefore all the stuff that’s coming in I’m re-jigging or making new mixes, or auxs, and then putting them out on different legs of the AES.”

Loudoun added, “Effectively in a day we are running 3 shows: we have the lead up to the main show – the Pre Show – which goes out on ITV 4. Then we have the Main Show that goes out on ITV 1. Later we have the Nighttime Highlights Show, where we pre-record all the feeds from the other games we are not broadcasting, and they are edited into a Highlights Package. This audio from the other games is routed through the Lawo to the right tape machines for recording, while we are broadcasting our live event. All the settings for each engineer and every set-up within the system on the Lawo are stored and can be instantly recalled. With the Lawo you have user-definable buttons and an external screen for visual monitoring utilising GUI (Graphical User Interface) on a laptop to do any looking around the system at any time without disturbing the mixing process.”
Summing up, Loudoun enthused, “The Lawo console really is extremely powerful, flexible, and user-friendly. It has been rock solid, totally reliable. I am extremely happy that we chose the mc²66 to be the vital hub for this massive project.”