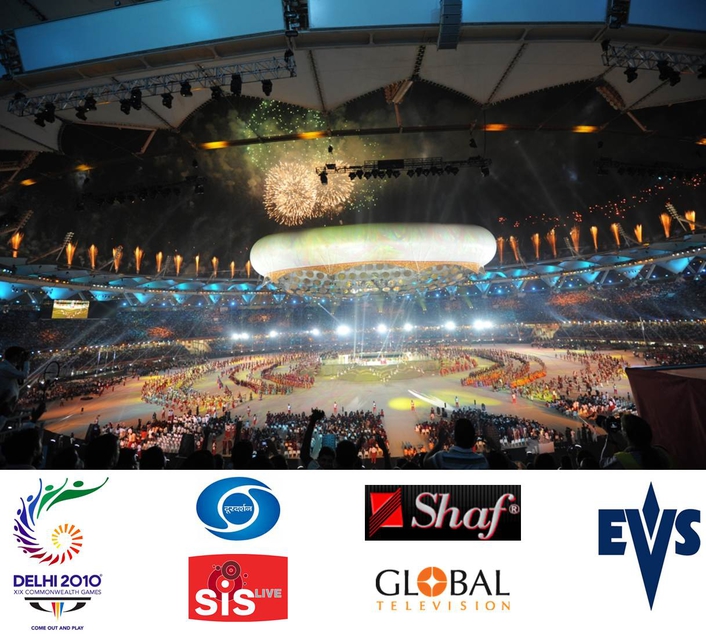 The Opening Ceremony of the XIX Commonwealth Games
EVS Instant Tapeless Technology was selected by Doordarshan Prasar Bharati Corporation (the host broadcaster) for operations involving recording, instant replay and editing, media storage and exchange and playout at the 2010 Commonwealth Games held in Delhi from October 3 to 14, 2010. EVS offered an innovative workflow solution that combined advanced production networking with complete control of live broadcast actions, managing a total of over 120 EVS production servers and their various software controllers.

India’s Zoom Communications and the U.K.’s SIS managed the venues production for Doordarshan Prasar Bharati Corporation, the host broadcaster, while India’s Shaf Broadcast and Australia’s Global TV, broadcast and facility specialists, were in charge of IBC production. The companies involved in the host broadcast operations opted unanimously for the EVS live and content management system as the solution for the first ever High Definition version of the event.

The XIX Commonwealth Games brought together 71 nations and territories competing in 21 sports and 272 events. It was the largest international multi-sport event ever to be staged in Delhi, India.

EVS technology was involved at all stages of the live coverage and multilateral/unilateral production procedures, which included more than 120 HD XT[2] servers representing 720 HD channels. 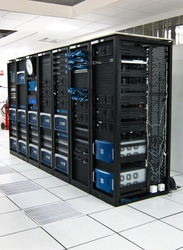 EVS XT[2] servers equipped with the LSM remote controllers handled all of the venues’ live replay and highlight operations. EVS also provided a centralized media server at the International Broadcast Center for full HD multiple feed ingest and media exchange. The sophisticated online media storage and exchange solution was based on an XT[2] network infrastructure and content management software such as IPDirector. The system was optimized for the recording of 25 live feeds from the venues, which added up to 1,300 hours of online content at the end of the competition. The host broadcaster’s production and post-production teams were offered instant access to the content in both high and low resolution. The EVS IPDirector’s advanced logging system  allowed all content ingested to be immediately indexed and referenced in a central database, for quick and easy browsing and search. Once the production and post-production operators had identified the required sequence, all they had to do was to transfer the file to their Edit Suite to prepare the daily highlights. 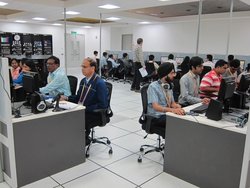 Three EVS Xedio CleanEdit editing software suites were also integrated into the host broadcaster’s setup, enabling the generation of 2 times 52 minutes highlight packages per day and Game News updates. The EVS editing system’s flexibility and ease-of-use and its ability to run in a near-live environment made it the most efficient solution for the host broadcaster’s production teams.All programs and best sequences (highlight packages) were backed up on XF[2] digital hard drive disks optimized for easy reload, with access to content facilitated by logs linked to the media. Combined with EVS tape library management system (TLMS), the solution allowed the host broadcaster to maintain a daily recording database as well as to handle archiving and disk or tape status backup via a centralized management system. The system was also used to manage disk and tape barcodes and labels.

In addition, EVS provided all the main rights holder broadcasters, among them BBC, Foxtel, Channel TEN and Sky New Zealand, with equipment for their unilateral production operations including live replay, browsing, highlight editing and playout.

Adds Luc Doneux, General Manager and Head of Big Events at EVS: “The number of hours produced to cover major sports events such as the Commonwealth Games is constantly growing. However, sports broadcasters need solutions to access and better exploit specific content at specific times. Based on its years of experience in live sports broadcast and storage management, EVS has developed a series of advanced networking and content management tools to maximize the access and the utilization of this content. The EVS media server’s success at the 2010 Commonwealth Games confirms the fact that broadcasters require instant access to more content so that they can deliver faster and higher quality productions to audiences worldwide.”

EVS Broadcast Equipment is a leader in the design of hardware and software for the production and playout of sport, news and TV programs in both live and near live environments. Its innovative Live Slow Motion system revolutionized live broadcasting, and its instant tapeless technology is now widely used in nonlinear editing and High Definition Television the world over.The company sells its branded products in over 70 countries and is capable of providing services in any region. EVS is headquartered in Belgium and has offices in Europe, the Middle East, Asia and North America.