EVS at the Nordic Ski World Championships 2011 in Oslo 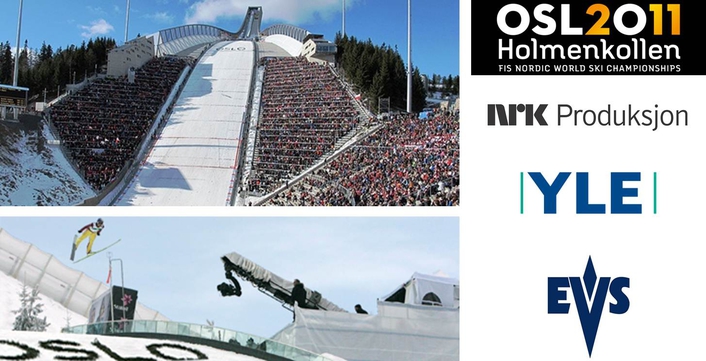 For the 2011 world championships NRK, the Norwegian public broadcasting company and host broadcaster of the event, deployed 2 HD OB facilities, including its new HD-2 in which EVS tapeless technology has been incorporated. This new-generation OB vehicle wired for 20+ cameras operates with LSM-XT2+ systems for multi-camera recording, live slow motion and SuperMotion replays, as well as highlights creation; IPDirector for ingest control, content management and file transferring; XTAccess with built-in XF2 drives to facilitate media interchange between the XT2+ servers and NRK’s editing clients Final Cut Pro and Quantel edit suites; as well as a GX server for HD fill and key playout operations under their Sony MVS vision mixer.

Magne Sivertsen, Production Manager at NRK: “HD-2 is already on its fourth production; which have all proved to be successful. We are very satisfied with the performance of the EVS systems and look forward to using them further at other upcoming events”.

YLE, the Finnish public broadcaster, was operating its latest HD OB van at this event for the first time. Their flagship OB vehicle is also equipped with EVS advanced production systems, including XT2+ servers, IPDirector workstations and XTAccess for the exchange of media with Avid Media Composer at the Holmenkollen venue.

Mika Sauramaki from YLE: “This was the truck’s first full tapeless production and not a single recording was missed. The flexibility of IPDirector’s ingest scheduler is certainly one of the reasons for this. Also, the integration with our EVS systems and Avid edit suites is flawless”.