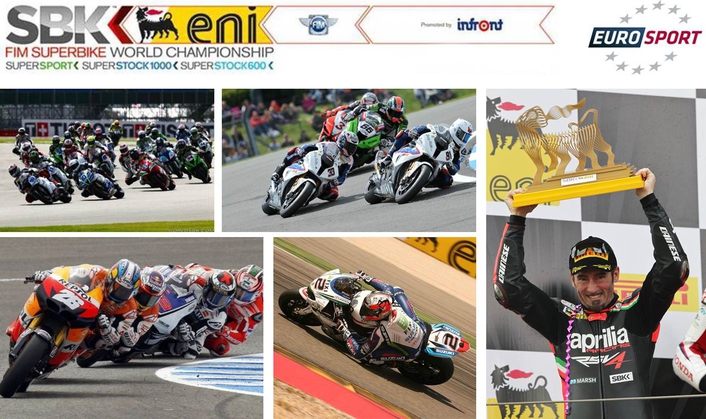 .
The Eurosport Group and Infront Sports & Media announce they have extended their long-term partnership of the eni FIM Superbike World Championship for the 2013, 2014 and 2015 seasons, with new exclusivities in four markets.

Eurosport has renewed the TV and digital rights to the eni FIM Superbike World Championship (SBK), including support classes FIM Supersport World Championship and FIM Superstock 1000cc Cup. In a change to the previous deal Eurosport is now exclusive LIVE broadcaster on air, online and on mobile in UK, Ireland, Germany and France.

This pan-European agreement includes all 59 territories covered by Eurosport. All rounds of the three championships will be shown live or delayed in high definition on either Eurosport or Eurosport 2 channels.

Digital rights will see all races, including the Superpole qualifying, broadcast on internet and mobile on the Eurosport Player online streaming service.

Julien Bergeaud, Director of Broadcasting and Programmes, Eurosport Group said: "Eurosport has been a long-term partner of World Superbike since 1998. We are delighted to extend this partnership for three additional years. With extensive coverage on TV, internet and mobile of the three FIM championships, plus exclusivities in key markets such as UK, Germany and France, Eurosport brings unrivalled broadcast to superbike fans in Europe and consolidates its motorsports offer."

Stephan Herth, Executive Director Summer Sports, Infront Sports & Media, added: “With the extension of the Eurosport agreement Infront has secured the most comprehensive coverage for World Superbike across Europe for the upcoming three seasons for the benefit of fans, manufacturers, teams and all commercial partners. Eurosport has a strong commitment to continue to serve motorcycling enthusiasts across the continent with top quality programming. This will help in further raising the profile of the world’s leading production-based motorcycle racing series.”