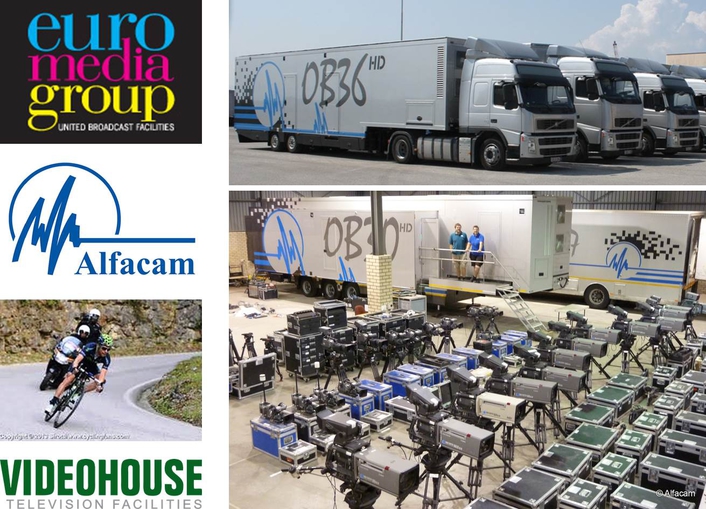 EMG is taking over the technical resources of Alfacam
Euro Media Group, a leading provider of broadcast services across Europe, announced the acquisition of technical resources from Alfacam, a Belgian firm specialised in the recording and broadcasting of live images internationally.

With this strategic acquisition, Euro Media Group, already well-established in Europe and Belgium, is reinforcing its presence and is uniquely positioned at worldwide level, notably in wireless technologies & services (RF) which are critical for major events.

Thierry Drilhon, C.E.O. of Euro Media Group, states: “Since its creation, Euro Media Group has contributed to accelerate the market consolidation in order to provide broadcasters and producers with more and more technology, innovation and expertise. The acquisition of these technical resources will contribute to support our long-term growth”.

The additional capacity will increase the leadership of Euro Media Group in Europe while expanding its operations in emerging countries such as Brazil. Drilhon adds “with the Tour de France coming soon, and the FIFA World Cup in Brazil in 2014, Euro Media Group confirms its strategy and its industrial business model.”

Euro Media Group is backed in part by Belgian investment company Ackermans & van Haaren. Financial details were not divulged but local reports suggest that they paid around €25 million for the assets.

The assorted assets include Alfacam's huge fleet of OB trucks which is the largest in the world.  Alfacam’s studios in Lint, Belgium are not covered by the sale.

Alfacam was started in 1985 by Gabriel Fehervari and in recent years has been at the forefront of covering events like the Olympic Games, World Cup football and live music events. The business failed when it tried to launch its own dedicated HD channel.

EuroMedia already has a 74-truck fleet of OB vehicles, and 92 stand-alone studios throughout Europe.

Alfacam’s debtors include the Flemish regional government which guaranteed some €16.4 million, and debts to various banks to the tune of €20.5 million.

The Belgian subsidiary of Euro Media Group – Videohouse – will be in charge of leading the integration together with group management.

About Euro Media Group
As the European industry leader, Euro Media Group is present in 7 countries: France, Belgium, Netherlands, Germany, UK, Switzerland and Italy. The group provides its clients with a complete custom-made solution for the production and delivery of all Media content from broadcast through to on-line. As a technical integrator, the Group is active across the entire production process, handling every aspect from filming though to content delivery.

Today, Euro Media Group is one of the few independent providers in Europe known world-wide for its technical expertise. Focused on new media, Euro Media Group is recognized for its wealth of experience in international sports, live performances and entertainment production. Offering a large range of services, advanced knowledge in technology and a strong ability to innovate, the Group provides clients with its specialist knowledge, delivering a high quality service.
The Group owns the largest range of studios (92 stages) and 74 mobile units, providing its customers with the greatest collection of studios and fleet of mobile facilities in Europe.