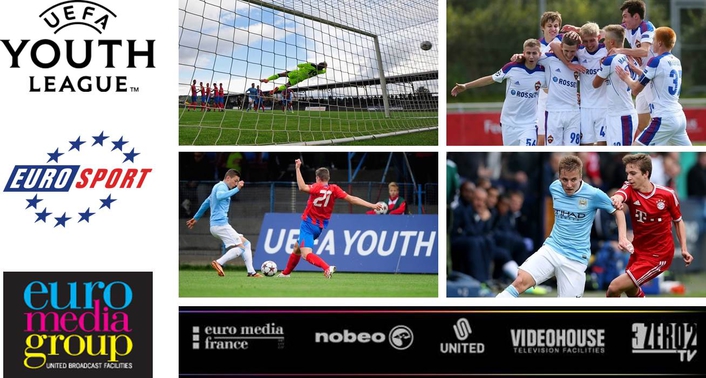 EMG has been selected by Eurosport, the official broadcaster of the junior version of the Champions League championship to produce the International Signal for all the matches across Europe. Thanks to its presence in Europe (Euro Media France in France, Videohouse in Belgium, United in Holland, CTV Outside Broadcast in the United Kingdom, nobeo in Germany and 3zero2 in Italy), EMG is able to make a global offer at a local cost. In this way local human resources and technical services are deployed for the coverage of each match while Euro Media France centralises the marketing and management of the productions.

In addition to recording and broadcasting the event, Euro Media France, via its Symah division, has also developed special graphics that will be used for all the matches.

« The operational synergies and the economic intelligence deployed for this event are a unique asset in Europe. The efficient management optimisation of this event provides continuity in terms of service quality, attention and response to our customers’ needs» pointed out Xavier Devreker, Sales Director for Sports at Euro Media France and in charge of the Youth League event.

About Euro Media Group
As the European industry leader, Euro Media Group is present in 7 countries: France, Belgium, Netherlands, Germany, UK, Switzerland and Italy. The group provides its clients with a complete custom-made solution for the production and delivery of all Media content from broadcast through to on-line. As a technical integrator, the Group is active across the entire production process, handling every aspect from filming though to content delivery.

Today, Euro Media Group is one of the few independent providers in Europe known world-wide for its technical expertise. Focused on new media, Euro Media Group is recognized for its wealth of experience in international sports, live performances and entertainment production. Offering a large range of services, advanced knowledge in technology and a strong ability to innovate, the Group provides clients with its specialist knowledge, delivering a high quality service.

The Group owns the largest range of studios (92 stages) and 74 mobile units, providing its customers with the greatest collection of studios and fleet of mobile facilities in Europe.