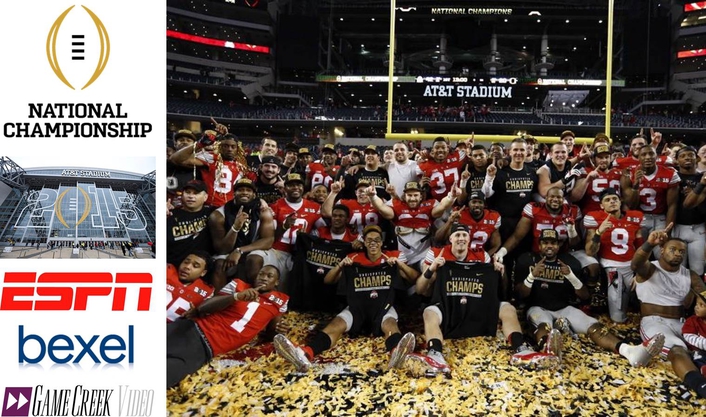 Live From CFP National Championship
ESPN Director of Remote Operations John LaChance echoes the thoughts of his long-time colleague Bob Braunlich. The two company vets agree that the first-ever College Football Playoff National Championship Game is going to be unlike anything they’ve ever worked on before. “I have been on Super Bowls, World Series, Olympics,” he says. “This is by far the largest-magnitude event that I’ve had the privilege of overseeing.”

ESPN’s game production crew — working out of a loaded compound housing eight Game Creek Video trucks (Spirit served as the main game truck) — has deployed more than 40 cameras and had approximately 60 camera sources at its disposal when you add in all the shared resources being used for ESPN’s Megacast and for in-stadium entertainment at AT&T Stadium. 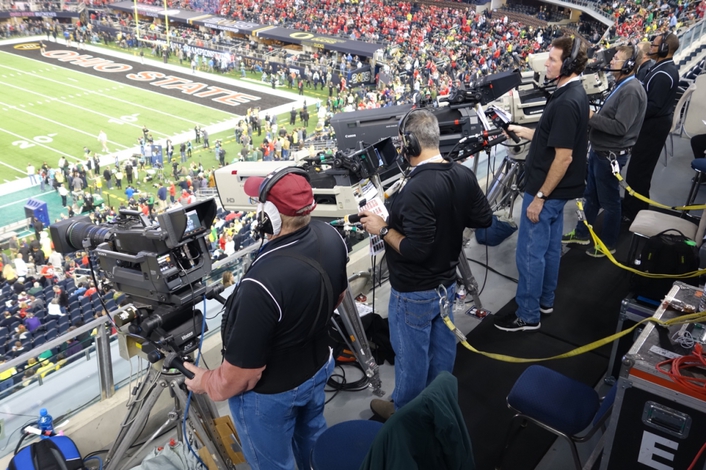 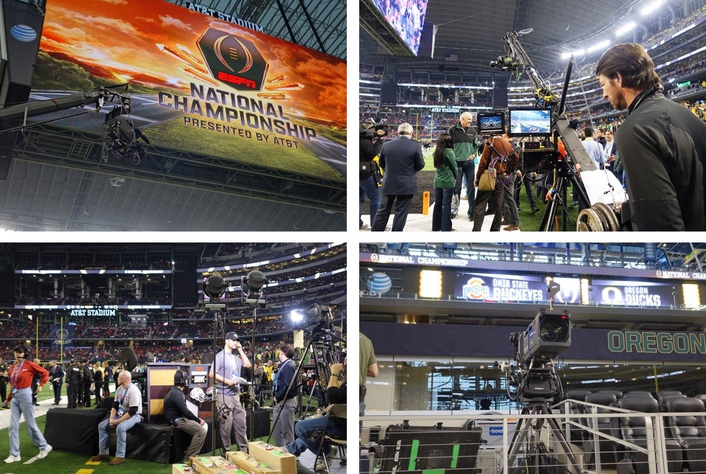 ESPN was also making a substantial 4K commitment to this year’s championship. Five hard Sony F55 cameras were distributed around the bowl, and four 4K I-Movix Phantom robotic units were positioned at the near and far side on each goal line.

Viewers saw an  example of just how valuable 4K zoom can be in Ohio State’s Sugar Bowl win over Alabama when Michael Thomas hauled in a critical touchdown catch late in the first half: 4K showed that he had gotten his foot in bounds. 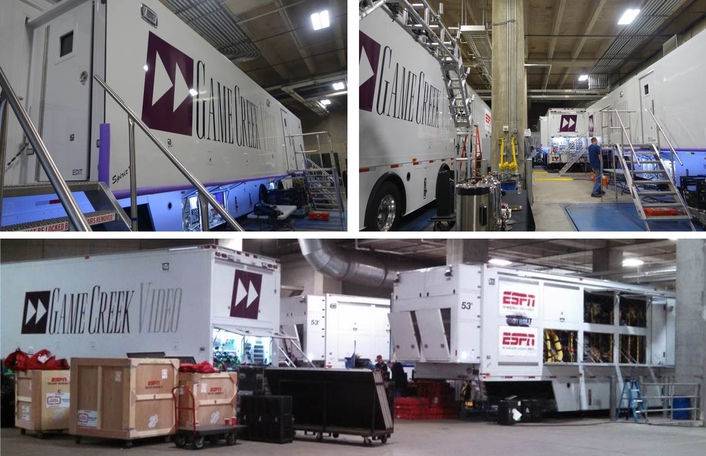 On top of all of that, the main game production had access to 10 camera sources in place to program the Megacast, four AT&T Stadium in-house feeds for the venue’s videoboard production (which was run by Van Wagner Big Screen Network Productions), and inbound feeds being sent from Columbus, OH, and Eugene, OR, showing a site on campus where a potential championship celebration could break out. 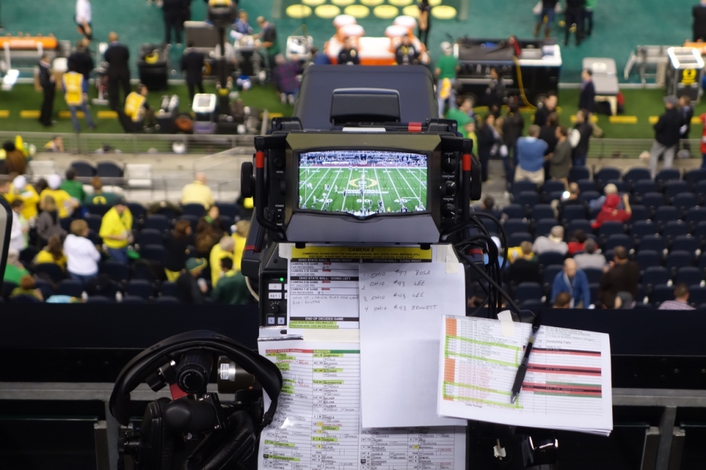 “Things have scaled up in overall volume,” says LaChance, who has worked on every college football championship game that ESPN has covered. “The pure scale and the magnitude of the technical presence is huge. I was very proud to be a part of the BCS history. We have certainly ratcheted up our efforts collectively. We’ve partnered together with [producer] Ed Placey’s team on how we can we best deliver and execute their game plan and what they have in store for those at home. As a content offering, it’s going to be a huge service for the folks watching at home.” 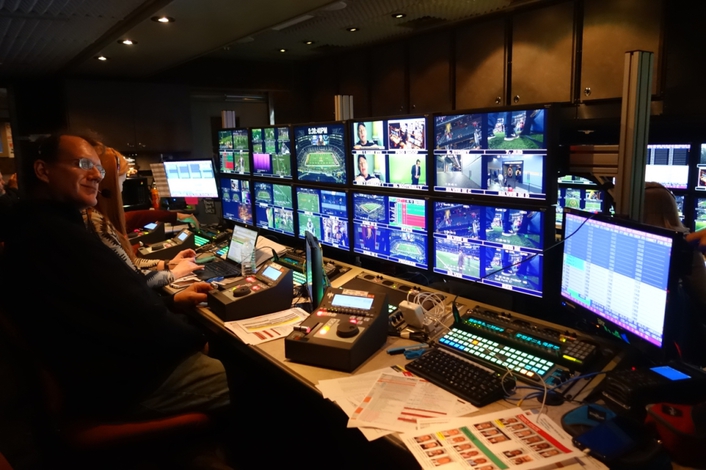 To record and play out all those sources, ESPN had a healthy 96 channels of EVS XT3 server and 32 channels of Evertz DreamCatcher (for the 4K robotics).

As one would imagine, the transmission grid is crowded at AT&T Stadium and throughout the Dallas-Fort Worth area. At the stadium, there were 32 paths out via fiber and satellite — LaChance notes that most of the satellite paths were scheduled as backup to the fiber. There were also 12 paths coming in to the stadium, mostly from ESPN’s home in Bristol, CT. 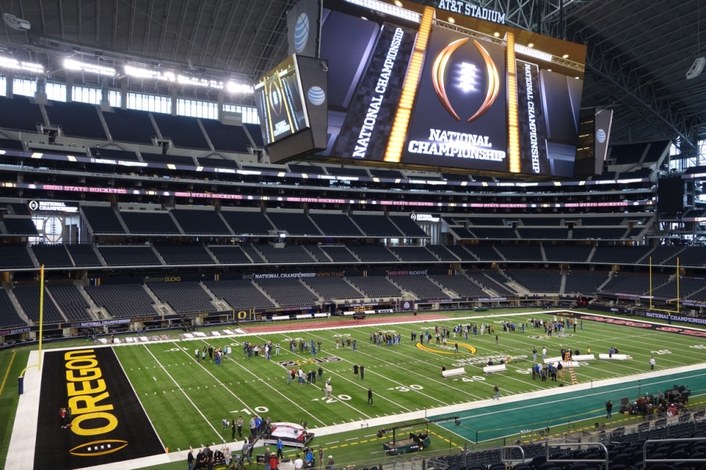 “When you do something of this magnitude,” says LaChance, “you have to have redundancy upon redundancy. There’s redundancy in power, in transmission, in the truck compound. We’re protecting for anything.” 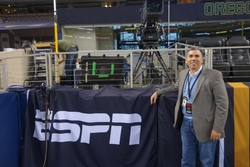 Including ESPN’s Fort Worth-based sets, ESPN is working with 49 paths out (via fiber and satellite) and 18 paths in.