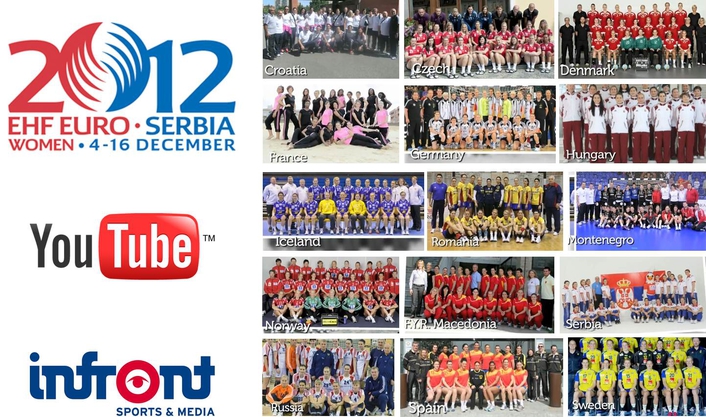 Carrying the media and marketing innovations of the men’s edition forward, the women’s tournament in Serbia starts next Tuesday
As the final highlight of the handball year, the Women’s EHF EURO gets underway from Tuesday, 4 December, in Serbia. Infront Sports & Media, marketing and media partner of the European Handball Federation (EHF), has sealed six Official Sponsorship agreements for the tournament as well as for the first time, a Data and Timing Partner, with Toshiba being the first brand to sign-up. Taking place in the cities of Belgrade, Novi Sad, Vršac and Niš, the EHF EURO will be broadcast to more than 160 territories and streamed live on YouTube*.

Sponsor messages showcased on LED boards
The event’s Official Sponsors include AJ (office furniture), Bauhaus (do-it-yourself market), Bring (postal and courier services), Grundfos (pump systems), Gjensidige (insurance) and Intersport (sports goods retailer). All brands have been committed to international handball for several years already – with AJ being a partner of the EHF EURO since 1998. In addition to the Official Sponsors, eight National Suppliers are backing the tournament, including major domestic brands such as Lasta (mobility) and Serbia Gas (energy).

Following the successful introduction of state-of-the-art LED advertising technology at the Men’s EHF EURO in January, the women’s tournament sponsors will now also benefit from the strong brand visibility and exposure benefits provided by the systems. The LED boards installed on the long side of the court complement other branding opportunities such as the static boards and floor stickers, adding to the advertising impact of commercial partners.

First ever Data and Timing Partner at the EHF EURO
Another attractive opportunity for brands to associate themselves directly with players is offered by the centrally marketed advertising position on the left sleeve of teams’ kit. Bauhaus (sponsoring 12 national teams) and the online comparison portal billiger.de (sponsoring four national teams) will take advantage of this platform – specifically suitable for on-screen exposure, as the position is highly visible in camera view through close-up shots of the players in action.

Finally, the EHF EURO, for the first time in its marketing history, is providing a high impact opportunity for a Data and Timing Partner – an innovation for 2012 that will also be transferred to the next Men’s EHF EURO. Toshiba (electronics) has taken up the exclusive opportunity and will be presenting all TV inserts – receiving significant brand visibility across all 47 matches of the tournament.

The Women’s EHF EURO 2012 will be produced in full HD quality by host broadcaster RTS, involving around 12 cameras per game. Approximately 60 broadcasters and radio stations will take the signal, guaranteeing broad coverage in key markets across Europe and beyond – including the USA, Canada, Australia, Africa, the Middle East and South America.

All games live on the official EHF EURO YouTube channel
Following the success at the men’s event, the EHF and Infront will again offer fans the chance to follow the action on the official EHF EURO YouTube channel, with live and on-demand coverage and English commentary. All 47 games as well as video reports and highlight clips will be available. The service can be accessed in countries without licensing restrictions* under www.youtube.com/ehfeuro

Jean Brihault, EHF President, said: “The EHF European Championship offers us the chance to showcase the very best of women’s handball to a global audience. This is the first time in the history of the EHF EURO that we will return to the same country in the same year and, following the huge success of the Men’s EHF EURO in January, I am certain that this will be another event to remember.”

Stephan Herth, Executive Director Summer Sports of Infront Sports & Media, added: “Following the record TV ratings achieved from the 2012 Men’s EHF EURO, coverage for both events is set to exceed the two billion mark in cumulative audience, if a similar upward trend is registered by the women’s event. Taking handball’s growing popularity and the EHF’s efforts to deliver the highest-level of tournament into account, this is more than achievable. The fascination that host nation Serbia already achieved at the men’s event in January will be transmitted across all media outlets to add even greater impact for the loyal commercial partners of the tournament.”

The Women’s EHF EURO 2012 will start next Tuesday with the opening game between Ukraine and Czech Republic. The finals will be played on Sunday, 16 December 2013 in Belgrade.