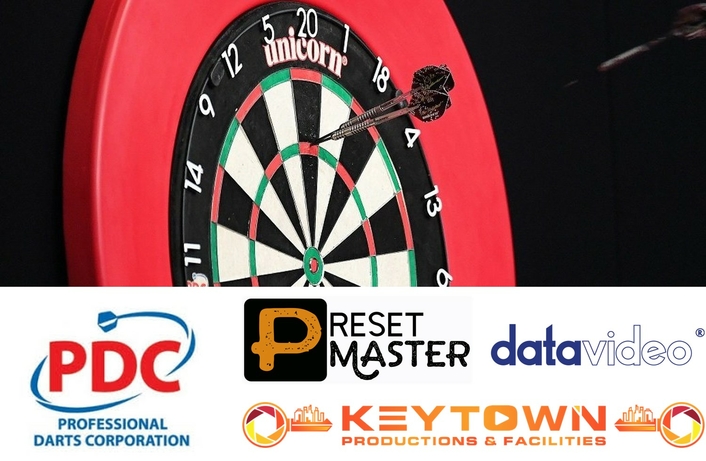 Everybody knows the game of Darts. An enthusiastic mass of spectators in the widest range of costumes in a huge hall and two players on a stage throwing small arrows at a small dartboard. In production the director focuses on the players and the scores they throw. That means that you need skilled camera men that know the game, a spotter that knows each and every players style and lightning fast communication. Keytown Productions from Leiden, The Netherlands, is a solid partner for darts production and has revolutionized the way professional darts is produced. They did this together with the Taiwanese hardware manufacturer Datavideo.

“Producing darts games on the highest level like the world championships will still be produced on the old fashioned way, with camera men, huge zoom lenses and a professional multi camera setup.” Explains Robbert van Loon, owner of Keytown Productions. “These are the large final tournaments that are being broadcasted regularly on international TV. But there’s also a large amount of smaller European tournaments at the PDC, the Professional Darts Federation. These events are called the European Tour Events. Next to these Eurotours there’s also the “DartShows” for the German television for which we do the production. All these tournaments are visited by a large crowd, and big names like Michael van Gerwen compete over there.” 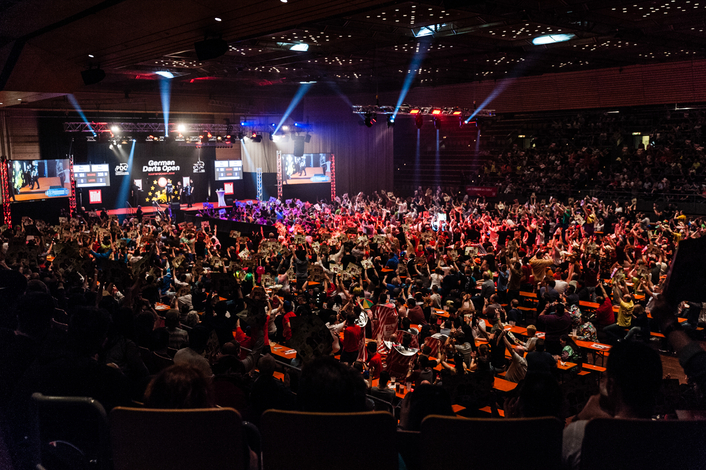 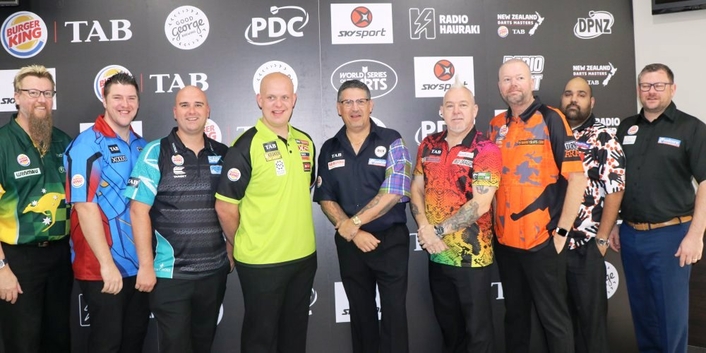 The players on stage are being followed by multiple cameras during a match. They zoom in on every single square on the darts board. The spotter, who is the key person during production, has to know where the player is going to throw his next dart. This is not an easy task, knows Robbert: “Our spotter knows each and every players’ characteristics and knows, for instance, when a player moves to triple 19 instead of triple 20. A director has to move fast in that case. The final darts of each leg are thrown in the “double” squares, the outer rim of the board. The small square is often zoomed in so that it completely fills the screen for maximum excitement. Quick adaption and a huge zoom lens are key components of a successful production.” 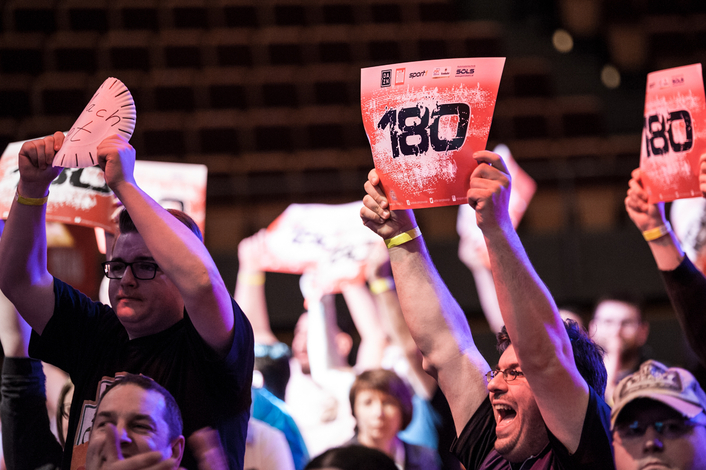 The setup of Keytown Productions had to be as simple and efficient as possible, without losing image quality. Initially, they chose to work with PTZ cameras instead of larger cameras with camera men. “PTZ cameras gave us an easy way of working with just a single operator. The current generation of PTZ cameras are so precise that they could recall the exact same position, time and time again. To control the cameras we have developed our own software. This software recalled the square presets and therefore we called it PresetMaster. With this software we could automate a large portion of our production so we basically only need a spotter that taps the right square on a tablet interface.” 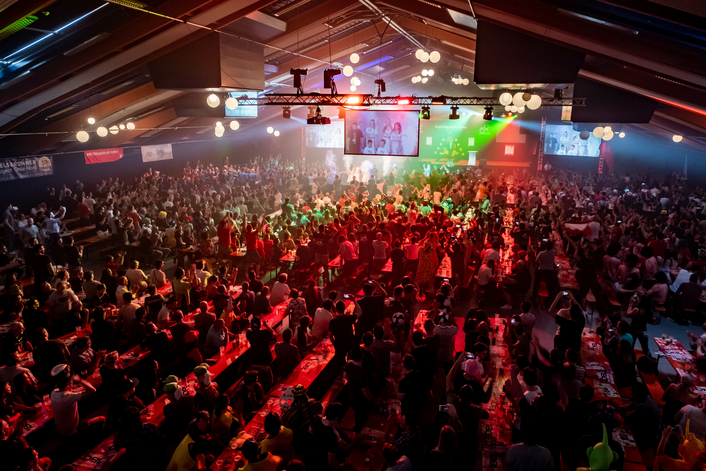 The biggest flaw in this setup eventually was the speed of the cameras. When recalling a preset you had to wait until the camera was done with moving and focussing. The installation of the mobile setup was also something that proved to be a very cumbersome job on each event. Keytown Productions had to calibrate the complete setup every time and that took a lot of time. Robbert tells us that it was time to check for a new solution. “4K as a broadcasting solution was not very interesting for us because our productions are streamed on the web. However, I saw a clear advantage of that larger resolution, since you could zoom in on it without losing detail. This way you could zoom in on a portion of the screen with a regular camera without camera men or a zoom motor!” For this solution, Robbert had to find an image processor that could make these zooms or cutouts and output these to his existing setup. 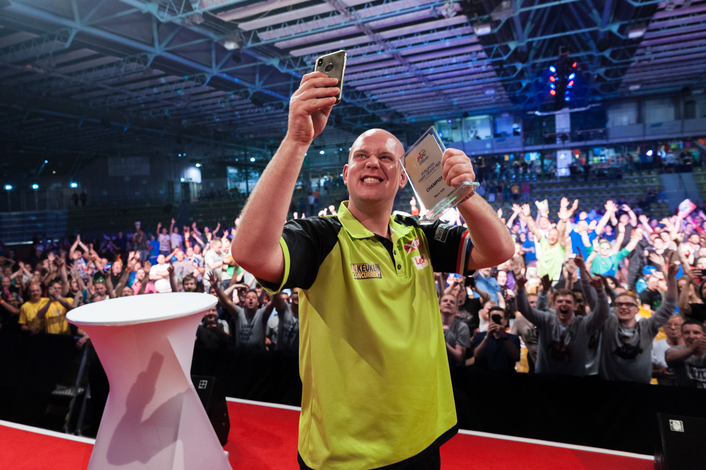 “A few years back, I stumbled upon Datavideo on IBC. I knew Datavideo from their cost effective switchers and mobile production sets. On this exhibition they showed their latest invention, the KMU-100. An image processor that is capable of creating cutouts out of two 4K signals and output them in 1080P resolution. After some discussion with the guys from Datavideo about the protocols of controlling the KMU-100 I decided to go for it and bought 2 units.”

The current setup of Keytown Productions at the various darts events has become a lot less complicated with the KMU-100. “We’ve moved from a couple PTZ cameras to a setup with just two 4K cameras.” Explains Robbert, “this ways we have to install and calibrate a lot less each event. In our PresetMaster configuration we’ve recreated the complete darts board on a touch screen. This way we can switch the shot with a single click on the screen. This works direct and seamless. We can also create a small zoom animation, which makes the shot very dynamic and realistic. A viewer won’t see the difference with a regular camera.”

“KMU-100 has been developed with these applications in mind.” Explains Johan Lieffers, managing director of Datavideo Technologies Europe BV. “4K is a beautiful format, but not widely used in transmission and distribution. Especially online streams do not benefit from 4K as a final format and for stage events 4K is also not a must-have. Downsizing the operation and production costs is a topic at hand for a lot of production companies. By using a single 4K camera to create a total of 8 shots you’re cutting costs very effectively. You basically get the effect of a PTZ camera without any moving parts.” Johan is also very enthusiastic about controlling the KMU-100: “KMU-100 is completely controllable by our hardware controller, the RMC-185. For remote control we have an API that is available on the website. Customers that need extra help with implementing KMU-100 in their broadcasting chain can count on our help with the integration.” 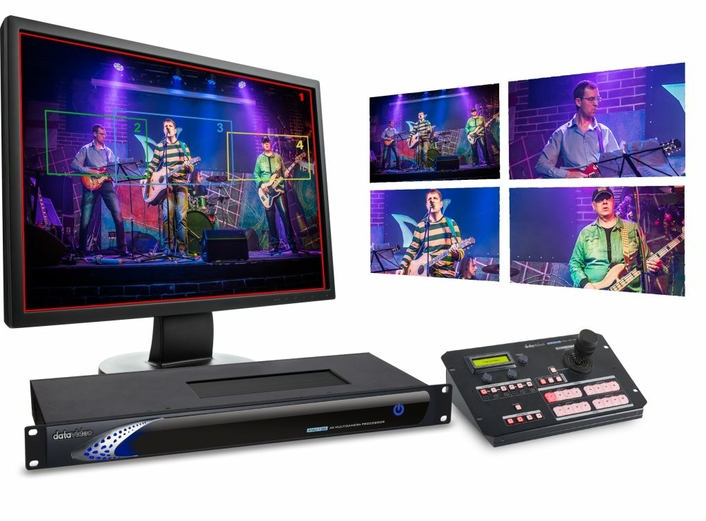 Datavideos KMU-100 is an advanced image processor in which up to two 4K signals can be modified by making cut out. A cut out is made by easily using the joystick of the hardware control panel, like a PTZ camera. These images are sent to one of the 8 available SDI outputs in 1080p and can then be used as a source for a switcher. The KMU-100 has an HDMI 2.0 input, 12G SDI and quad 3G sdi that can be used as input channels. Next to the 8 SDI outputs there’s 2 HDMI outputs for monitoring (quad split/wireframe view) available as well. Datavideo manufactures a hardware controller in the form of RMC-185 and there’s a Windows tool available as well. The control set is available on the website of Datavideo. KMU-100 is available for an MSRP price of $ 2.999,- and the controller is available for $ 949,-

PresetMaster is a professional software tool to control various types of networked broadcasting peripherals. From PresetMaster you can create a GUI according to your own preferences. With PresetMaster you can control peripherals from major manufacturers such as Datavideo, Panasonic and Blackmagic Design. Currently, PresetMaster has built in support for various switchers, recorders, PTZ cameras and of course the KMU-100 of Datavideo. The software works intuitive, is very simple to use and has practically endless possibilities. More information on PresetMaster or a test version can be found on www.presetmaster.nl. The software is available for a price of $ 849,-