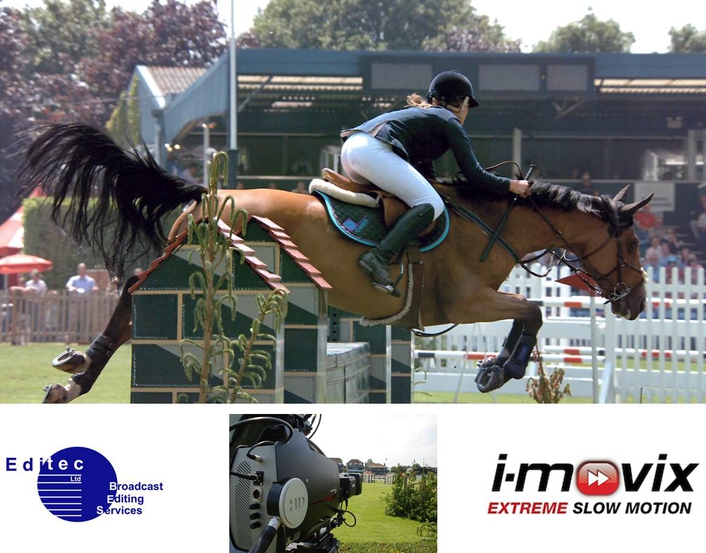 During the Hickstead events, the system was used with a variety of frame rates, sometimes as high as 2000fps
This year's Horse of the Year show (HOYS) completed a trio of prestige show jumping events broadcast live this year on Sky sports, the other two being top Hickstead events. This is the second year that the I-Movix Vvs ultra slo mo system has been used on these UK events to provide stunning ultra slo mo playback, enhancing production values and the viewing experience.

During the Hickstead events, the system was used with a variety of frame rates, sometimes as high as 2000fps. The NEC HOYS event was indoors, so thelighting levels restricted use of the higher frame rates – still, the camera and system performance allowed shooting at around a remarkable 750 fps.

Steve Cotterill, MD of Editec Ltd said  “We are very pleased to have the repeat business from our major client Sky Sports. The I-Movix system comes into its own on these events, with superb high speed and low light performance. Other systems would struggle to produce clean pictures even at at 250 fps.  Director Phil Murphy, a long standing Editec customer commented  “I-Movix allows you to witness sporting moments the human eye cannot detect.”

Steve said “The camera system in itself is superb, but the skills of the operational and engineering staff at these events add further to the results achieved – credit due to Ben Seaman, freelance cameraman, and Ian Nisbett, senior vision engineer.”

In a reference to the benefits of the technology Daisy Bunn, who is one of the Hickstead Directors states on the Hickstead website "We are delighted to have Sky Sports as our host broadcaster at Hickstead. Since they turned their hand to showjumping coverage nearly a decade ago, they have been single handedly responsible for exposing an entirely new audience to the sport, with their innovative, exciting and ground breaking coverage. Constantly introducing new technologies, they have produced never-seen-before footage of the sport, and indeed even the physical anatomy of the horse in motion."

About Editec
Editec was founded by Steve Cotterill in 1992 as a specialist provider of broadcast products and services. Editec introduced the now de facto standard EVS Live Slow Motion disk recorders into the UK marketplace. At that time, the early 1990's, Editec operated as the Exclusive Distributor for EVS of Belgium and greatly assisted in the adoption of EVS technology into the UK Broadcast Industry.
Editec are proud to be the sole UK distributors of the I-Movix Sprintcam hi-motion camera system.  The system is also available for rental from Editec along with skilled operators and engineers.
The system uses the latest Phantom 640 camera for superb all round performance with I-Movix providing a world beating broadcast integration,  operating up to 2700 fps in native 1080i resolution.
Clients include Sky Sports, ITV Sport, ESPN, BBC and many others. The system can be used in sports, commercials, light entertainment, music industry videos , in fact just about anything you are planning to shoot.