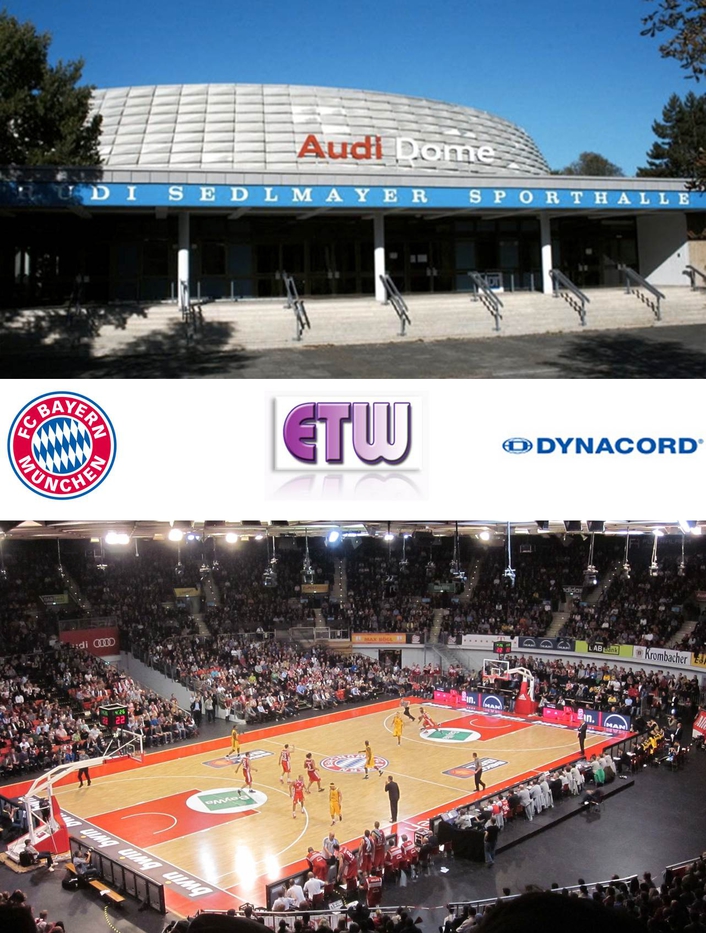 ELA-Technik Wagner was responsible for the installation of a sound system from DYNACORD and Electro-Voice
Sports fans the world over associate the name “Bayern Munich” with soccer; yet in basketball, too, having won the German championship already in 1954 and 1955, the club is capable of great things and ambitious of a tradition to compare with that established in the beautiful game by the likes of Franz Beckenbauer, Gerd Müller, and Oliver Kahn.

Bayern's basketball team re-entered the Bundesliga – Germany's top division – in March 2011, and since then the sport has experienced a renaissance in and around the Bavarian capital. To accommodate the team's ever-growing army of fans, in May 2011 the club decided to stage home basketball matches in the Rudi-Sedlmayer Hall, which, after extensive modernization and rebuilding, was renamed the "Audi Dome" prior to welcoming its quota of 7,200 spectators to the official opening at the end of September.

To be sure of offering first division quality, too, in terms of sound and safety, the club invested in a combination of sound reinforcement and voice alarm systems from DYNACORD and Electro-Voice. The installation – now considered a reference in area audio  – was performed by ELA-Technik Wagner, which is based in nearby Alling. "In terms of intelligibility and music reproduction, the standards imposed on sound reinforcement systems in the Bundesliga are extremely high," says company MD Karl Wagner. "For example, we had to guarantee the venue the ability to evacuate 7,200 spectators swiftly and safely in case of an emergency. Additionally, in spite of the inevitably high ambient noise levels that occur during exciting matches, we had to be sure that announcements and commentary would be clearly intelligible at all times, even at the back of the arena. To add a further challenge, we were on a very tight schedule, with only two months to plan, install, and commission the whole installation."

Through the use of simulations – which later proved accurate in every detail – the team led by Wagner, together with EVI Audio's Technical Support department, were able to ascertain the ideal sound reinforcement solution, which combines components from DYNACORD and Electro-Voice and is capable of simultaneously satisfying the demands of both sound quality and safety. In the event of a power failure, the voice-alarm system is supplied by an emergency generator. The entire installation can be supervised and controlled from a PC running IRIS-Net software that allows the ProSound and voice-alarm equipment to operate as an integral system or independently as the situation requires.

To ensure the Audi Dome's ProSound system was capable of delivering the requisite sound pressure levels without exceeding the ceiling structure's maximum permitted load, ELA-Technik Wagner opted for 20 EVF-1152S loudspeakers from Electro-Voice's EV-Innovation series. Naturally, their lightness was the decisive factor, but these front-loaded 15" full-range systems are also capable of generating high sound pressure levels with very little harmonic distortion. Twelve of the units cover the main grandstands and semicircular seating areas at each end of the court, six address the VIP seats directly adjacent to the playing area, and two cover the court itself.

Powered by five DYNACORD DSA 8405 and two DYNACORD DSA 8206 amplifiers, the loudspeakers combine to create a homogeneous sound image throughout the arena. RCM-810 amp modules contribute comprehensive remote control and supervision possibilities through integration into the IRIS-Net. DYNACORD's Variable Load Drive technology allows each loudspeaker channel to be controlled individually, whilst the IRIS-Net software allows the power amplifiers to be configured to deliver their maximum output in the range of 100 W to 500/1000 W per channel in 1 W increments into any load (in increments of 0.1 Ω) between 2 Ω and 10 Ω. The overall control of the system is the responsibility of a DYNACORD P64 Digital Audio Matrix Manager, with an IRIS-Net interface providing not only access to, but also real-time control and supervision of, all the essential crossover, delay, and filter parameters.

For announcements, the playback of recorded music, and commentary, a DYNACORD CMS 1600-3 mixer is provided along with REV wireless microphones, three REV dual receivers, and five REV hand-held transmitters from Electro-Voice.

After much-praised performances in their opening home games, the Bundesliga freshmen are well on the way to a successful first season in the top flight – and the same can be said of the new sound system. "The installation is delivering values identical to those we saw in the simulations, right through the list." reports Wagner. "The level of intelligibility is exceptional, whilst the music reproduction lacks nothing in terms either of transparency or SPL. Needless to say, the customer is more than satisfied!"