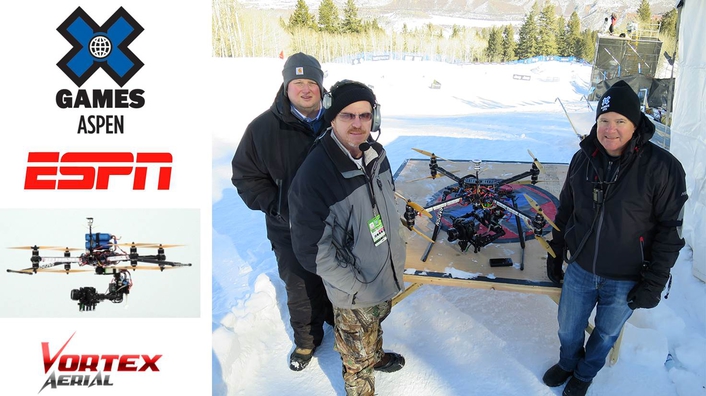 Vortex Aerial pilotCEO Chris Schuster (center) with ESPN’s Jed Drake (left) and Dennis Cleary
Drones have officially arrived in live U.S. sports coverage at this week’s X Games in Aspen, CO, and they have been a long time coming for ESPN’s VP of Remote Operations Chris Calcinari and X Games Senior Coordinating Producer Rich Feinberg and their respective teams. They have spearheaded the drones effort over the past six months, jumping through regulatory hoop after hoop and overcoming a litany of technological challenges.

“I’m trying to manage everyone’s expectations because this is just day one of what is hopefully years of finding interesting ways to utilize this drone technology,” says Feinberg. “There is a lot still to work out, but I’m very optimistic that it was very much worth the effort put in by so many people.”

Months in the Making
Although drones have been used for a variety of sports-related endeavors, primarily in coaching and scouting applications, ESPN’s deployment at X Games is the first live sports production to be fully sanctioned by the FAA.

The effort started in September when the FAA authorized six companies to use drones for film and television productions. This coincided with the return of Feinberg, a drone enthusiast and owner himself, to X Games after focusing on ESPN’s auto-racing coverage for eight years. 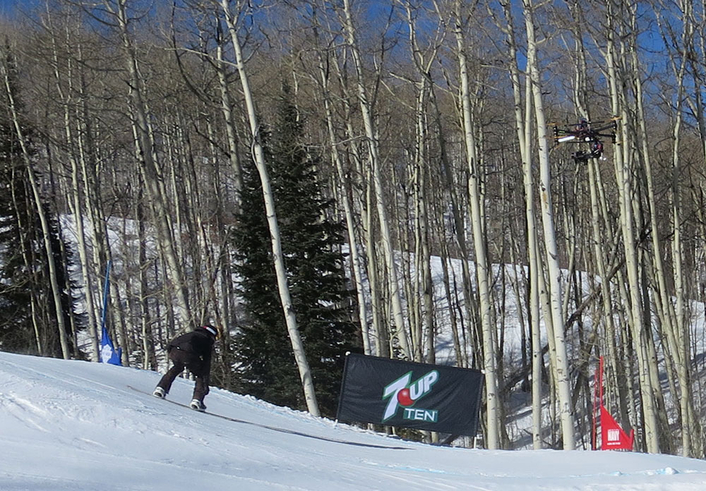 The drone in action during Snowboarder X qualifying

“When I found out I was coming back to X Games, I immediately knew that my number-one focus would be how we can get drones involved,” says Feinberg, a 14-year X Games veteran (1994-2006). “I called Chris and told him, if I make nothing else happen, this is what I want. I’ve been around X Games long enough to know that it is truly a laboratory and we can get more things accomplished because we own the event and have great relationships with the athletes. That made it a perfect fit.”

Once the vendor was selected, ESPN applied and was approved for a Certificate of Authorization (COA) from the FAA and received approval from the Flight Standards District Offices to fly a drone so close to the adjacent Aspen Airport. In addition, Calcinari and his team had to receive internal approval from parent company Disney, which had a policy against the use of drones.

“Part of the COA application made to the FAA involves proving we were operating in a closed-set environment, which means you can’t fly a drone in a space that has people not involved in the production — meaning no public access whatsoever,” says Calcinari. “We worked with our event and production guys, and we found a section of the X Course that is completely secluded from the public.”

The five-person Vortex Aerial crew consists of pilot and company CEO Chris Schuster (who boasts more than 40 years’ experience in remote-controlled aircraft flying/engineering), a camera operator, a spotter (who monitors the area for breaches and alerts the pilot when a competitor is about to start a run), a focus puller (to adjust focus, zoom, iris, etc.), and a technician/utility person.

“There is a lot to learn, both with us and Vortex,” says Feinberg. “They are used to working on film sets, and we are sports producers that live second-by-second doing live shots.”

The toughest challenge thus far has been the impact of the icy conditions atop Buttermilk Mountain on the life of the drone’s battery. Typically, the battery lasts 10-12 minutes, but the cold temperatures have cut that to 6-7 minutes.

“Thankfully, we have 70 batteries here, and we are cycling batteries through pretty easily,” says Calcinari. “The portion of the course [the drone is] covering is so short and quick that it is not a huge issue. Plus, it’s perfect because we have natural delays between [races].” 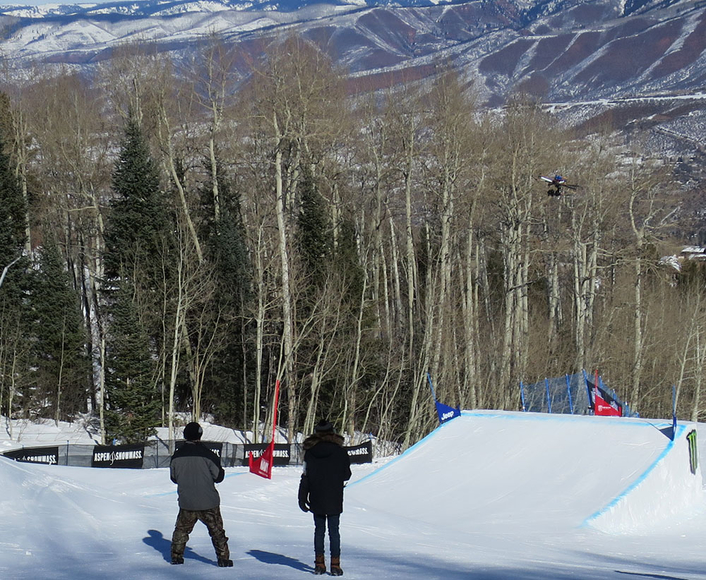 An Eye Toward the Future
Although ESPN’s drone deployment marks a massive step forward in use of the technology for live sports coverage, the fact remains that current FAA regulations prohibit drones’ flying within 500 ft. of spectators, making drone use on any traditional sport unlikely in the near term.

“The great thing about X Games is, we control the field of play, which allows us to experiment. There aren’t a lot of events that allow you to do that,” says Calcinari. “I personally don’t see, with current FAA rules, how much more we can do at this time for traditional stick-and-ball sports.”

ESPN SVP, Production Innovation, Jed Drake acknowledges that the use of drones at indoor venues is not likely to happen anytime soon, but he believes they could serve as “a great augmentation to capture a sense of place surrounding the game itself. 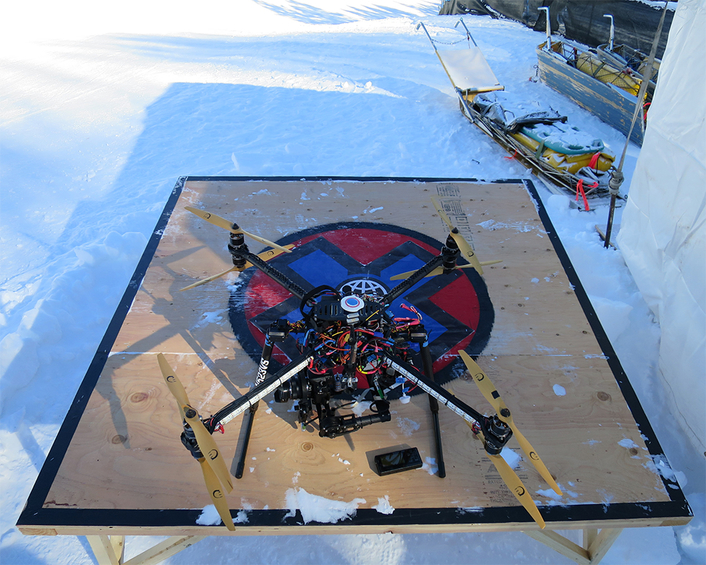 “In terms of actual coverage of events,” he continues, “you would look at events held outside with large territory that needs to be covered. Candidly, I think you can look at golf, depending on limitations that would be set forth, as an event where drones would be a great addition. Using that kind of dynamic is probably where you’re going to end up.”