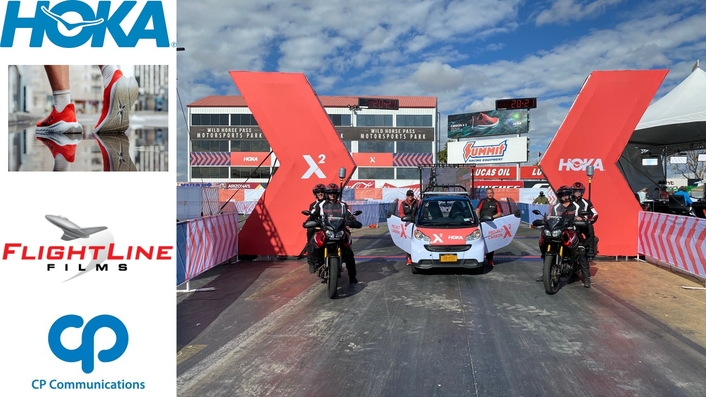 To celebrate the release of the Carbon X 2, its new high-end running shoe, HOKA invited some of the world’s top long-distance ultrarunners to try a pair – while trying to break the world record for a 100K run. CP Communications, a leader in innovative solutions and services for live event productions, provided live streaming for Project Carbon X 2, held January 23 at Wild Horse Pass Motorpark and Casino in Chandler, Ariz.

The shoot exclusively relied on CP’s Red House Streaming (RHS) IP and bonded cellular solutions for live 4K and 1080p content acquisition. CP Communications was contracted by FlightLine Films, who envisioned, produced and broadcast the event for HOKA ONE ONE®, and served as technical facilities provider. CP technicians brought CP4, a 40-foot production B unit, to house the streaming signal processing and monitoring equipment, including several Mobile Viewpoint Playout 2K4 servers. The two vehicles were parked close enough to run copper between them to share signals, while the skeleton production teams carefully followed COVID-19 protocols during the shoot. This included onsite testing and social distancing before and throughout the spectator-free event. 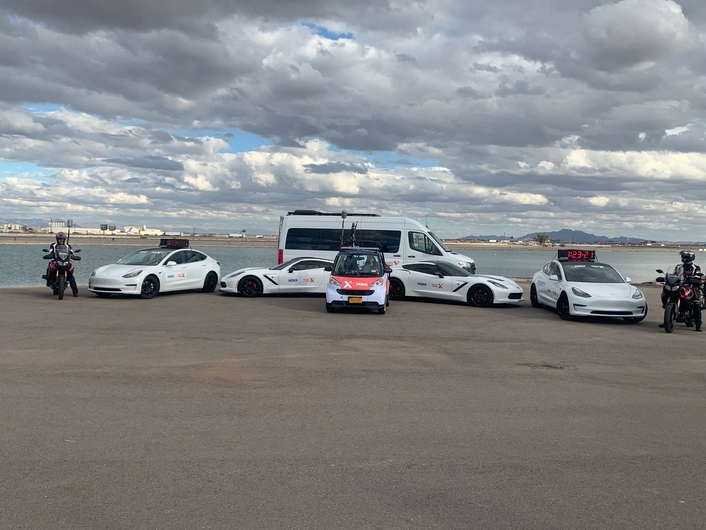 The production featured footage from two motorcycles and one car, which followed the course to provide closer coverage of the runners. CP Communications’ custom Smart Car featured a robotic camera mounted to a Flowcine Black arm stabilizer, which provided dynamic camera angles and smooth 1080p footage throughout the race. The camera was paired with a Mobile Viewpoint Agile Airlink encoder. Both motorcycles, provided by MediaMotos, were equipped with Blackmagic cameras and acquired all content in 4K using Mobile Viewpoint Ultralink 4K.

CP Communications added microphones to all three vehicles, providing embedded audio that was de-embedded in the FlightLine truck and used during the production. A Unity Intercom system, which connects via cellular (or Wi-Fi), allowed communications between the motorcycles, as well as the CP and FlightLine production teams.

“There was zero RF at this event, so we provided nearly 100 percent coverage for both 1080p and 4K content acquisition over IP and bonded infrastructure,” said Ready. “We streamed the 12G-SDI camera output directly into our Agile UltraLink 4Ks, which we mounted on the back of the motorcycles. We maintained a steady stream of 6-8 Mbps for signal encoding from the Smart Car, and 15-16 Mbps from the motorcycles.”

Scott Gillies, Executive Producer and Strategic Partner, FlightLine Films, claims that CP’s RHS technologies provided “more refined features and convenience” not traditionally seen at running event productions. “Bonded cellular technology makes the difference when it comes to streamlining the production,” he said. “We don’t need an RF tower and the traditional microwave toolset, and we have the luxury of a genuine return channel for monitoring. The stabilized cameras are a gamechanger for keeping up with lead runners and providing a platform for on-course correspondents. We can now bring the level of quality and refinement previously seen only at the world’s largest marathons to these smaller webcasts.” 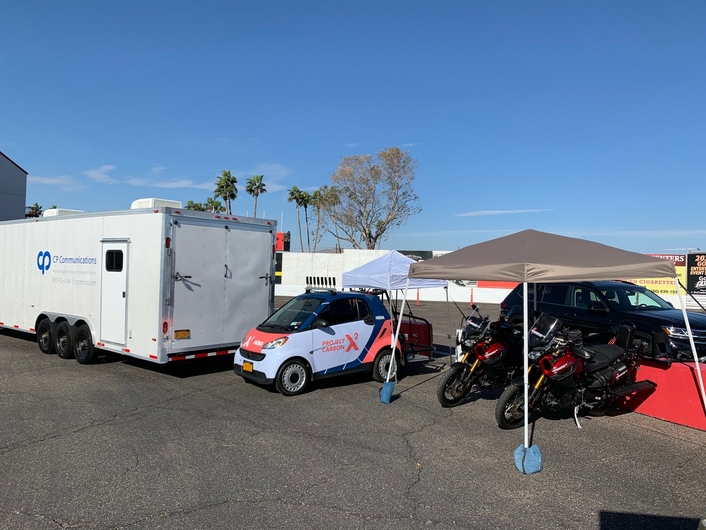 While IP and bonded cellular reduced the costs and complexity of live content acquisition, Ready notes that it can be more challenging than traditional microwave transmission because the production does not have control over the infrastructure. “We are the mercy of the cellular carriers, and it’s imperative to confirm that they have the capacity to carry the event,” he explained. “We performed a cellular site survey prior to the event. Upon arrival we ran the entire course to confirm that the quality and extent of coverage would suffice.”

There were no fans at Project Carbon X 2 due to COVID-19 restrictions, but more than eight hours of coverage was streamed live to YouTube and the HOKA website. The competitors ran approximately 62.1 miles in two closed loops around the casino grounds, with the winning runner falling 11 seconds short of the world record.

Although the event was produced on location by FlightLine Films, CP Communications’ Network Operations Center (NOC) in Florida kept watch on the data for signal integrity and quality control. “Producing 4K over bonded cellular made it a bit more interesting, and our NOC technicians provided the QC and occasional bandwidth adjustments we needed for peace of mind,” Ready added. “Very few of our competitors are going into the world of bonded cellular. We have the technicians, we have the experience, and we can provide a turnkey service to bring these events to life over IP.”

For more than three decades, CP Communications has provided high-quality, cost-effective live event production solutions to major broadcasters, sports leagues and teams, and event and production companies. Our solutions include access to experienced professionals, state of the art equipment, and innovative technologies and techniques for wireless audio & video content acquisition, transport and delivery. Our culture of innovation, coupled with the highest quality assurance standards and passion for customer service, promote collaboration with our clients to determine the best custom solution for each live event.