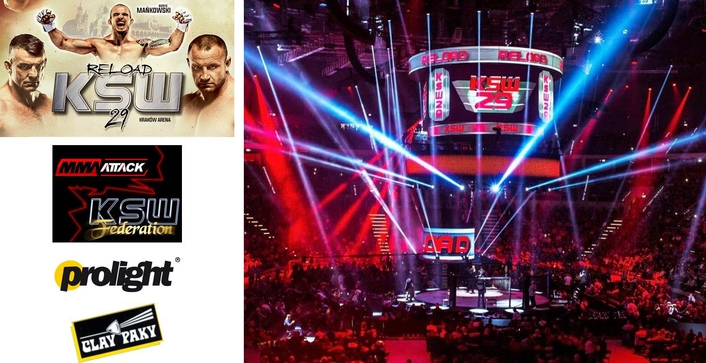 .
The biggest live event in Polish Mixed Martial Arts history, KSW 29: Reload, took place this month at Krakow Arena in front of over 16,000 audience members, with thousands more around the globe tuning into the live broadcast in Pay per View. Lighting designer and director Pawel “Spider” Pajak therefore chose the fantastic power and effects of the Clay Paky Sharpy, SuperSharpy and A.leda B-EYE K20 to ensure the tournament packed a huge punch.

Pajak’s company Fish Eye was also responsible for the whole technical coordination of the event, with Marcin Szczakiel working as programmer and operator and Tomasz Szwelicki leading the technical department.

“The key aspect of my design was to deliver a spectacular show for the audience, that also met the needs of the live TV broadcast,” says Pajak. “I chose Sharpys and SuperSharpys as I needed to create impressive beam looks and follow some special cues to help create drama at specific points in the show. Both the Sharpy and SuperSharpy are perfect tools if you give them enough space. I use the SuperSharpy as a kind of ‘light scalpel’ to sculpt the space as it’s extremely bright and has more advanced optical system than the Sharpy, but is still very fast and lightweight. I also really like the size of the front lens.”

Pajak’s design was based around a massive central chandelier suspended above the round cage to create the impression that it was the core of the venue. Another two layers of truss rigged with B-EYE K20s and Sharpys surrounded it.

“At this event I’ve used B-EYEs mainly to wash the audience but we’ve also employed its range of effects during the music of the fighters’ entrances,” continues Pajak. “The B-EYE K20 is my favourite fixture of this year. When you spend enough time on it and really understand its possibilities, it proves itself as one of the most creative tools I’ve ever used and aside from all its effects it’s a really powerful washlight. I feel privileged to have worked closely with Clay Paky as a consultant and designer for many of the macros that are implemented in the B-EYE software.”