CEV and Infront to Continue and Enhance their Partnership 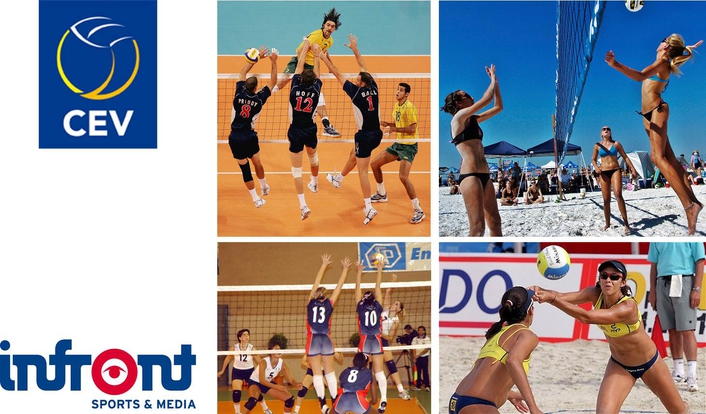 Infront Sports & Media has extended its long-term partnership with the Confédération Européenne de Volleyball (CEV) up to and including 2021. The international sports marketing company will continue to distribute the world-wide media rights for the bi-annual Men’s and Women’s CEV Volleyball European Championships. The agreement also marks an expansion of the partnership. From 2014 onwards, Infront will also distribute the international media rights for the CEV Beach Volleyball European Championships as well as the CEV Beach Volleyball Continental Cup Finals in 2016 and 2020 – the decisive qualifying competitions for the Olympic Games in the respective years.

The new contract covers all forms of electronic media rights including television, radio and new media broadcast rights for the CEV top events on national team level. Infront will continue to offer the rights in a varied and flexible manner, including live, delayed, highlights and news coverage. The company will also be directly in charge or supervise the host broadcast production of the CEV events, guaranteeing media rights licensees a TV signal of high international standard.

CEV President André Meyer said: “We look forward to another step of our cooperation with Infront Sports & Media. By taking into consideration the good results stemming from the past few years, we have decided to join our forces once more in order to provide the Volleyball and Beach Volleyball community with a first-class service when it comes to TV production and the distribution of all relevant media rights. We know we have a very solid and professional partner at our side and I am convinced this extended cooperation will significantly help the promotion and development of our sport.”

Rising TV figures boost popularity
Philippe Blatter, President & CEO of Infront Sports & Media, added: “The CEV-Infront partnership is among the most long-standing in the industry and Volleyball a core pillar of our summer sports portfolio. We are proud and delighted that we earned the trust and respect of the CEV to further strengthen this successful partnership. Together, we will continue to deliver top quality and excellence for the good of European Volleyball, its commercial partners and fans. At the same time we are taking a more comprehensive approach that includes traditional Indoor Volleyball and the rapidly growing sport of Beach Volleyball. For both disciplines, we will leverage our unique expertise in media rights distribution, media production as well as marketing, ensuring continuous success for the CEV and its events.”

A strong track record
Since the inception of the partnership in 2005 Infront and the CEV have continuously increased the visibility for the Volleyball European Championships. At the last event in 2011 contracts were sealed with more than 30 broadcasters airing approximately 1,200 hours of coverage in over 100 countries throughout Europe, Asia, Africa and South America. The cumulative audience of the two events totalled at more than 2 billion. Also, Infront has throughout the years worked on the quality of the television picture providing a framework for a state-of-the-art host broadcast production. The established production specification includes more than ten cameras in each arena for each game to capture all facets of the dynamic sport.