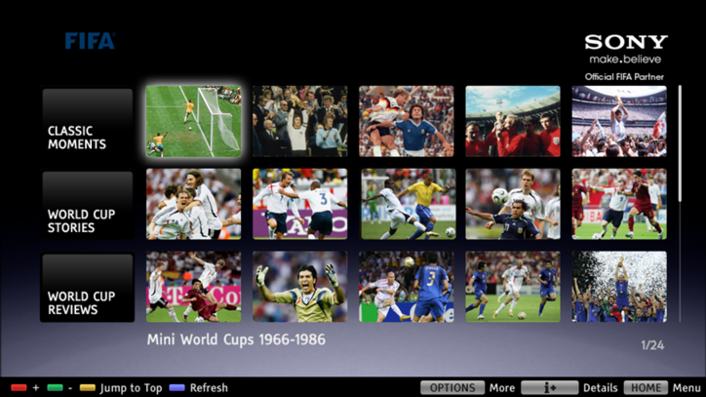 Owners and prospective owners of a BRAVIA TV, BRAVIA Home Theatre or Sony Blu-ray player with BRAVIA Internet Video will be able to enjoy the Top 20 FIFA World Cup Moments, check out legendary FIFA World Cup stories and anecdotes, watch one of several FIFA World Cup films or check out the profile of their favourite classic football player.

BRAVIA Internet Video lets you watch the programmes you missed on popular ‘catch-up’ TV services, so you can enjoy full-screen re-runs of your favourite TV shows whenever it suit you. It also allows access to a whole world of free, on-demand internet content to explore from sharing websites such as YouTube ™, Dailymotion™ and many more. There’s no need to hook up your PC or watch on a cramped screen; you can quickly access new videos and services as they’re added and stream full-screen content direct to your TV.

The partnership with FIFA adds to Sony’s roster of BRAVIA Internet Video partners. It brings a vast catalogue of football games, facts and films directly into the living room, whenever it suits you. Initially available in English only, French, Italian, German and Spanish versions of the service will be available soon.

Speaking on the announcement, Christian Luecke, Director Consumer Marketing TV & Online Marketing, Sony Europe, said: “We are very excited to offer a catalogue of the FIFA World Cup Collection to consumers in time for the 2010 FIFA World Cup. Thanks to BRAVIA Internet Video and our partnership with FIFA, we can make some of the greatest football moments come to life in consumers’ living rooms across Europe at the touch of a button.”

The catalogue is expanded continuously and includes the following

• 14 Official Films from the 1930 – 2002 FIFA World Cups
From the tense last moments of "Goal", the colour record of England’s only FIFA World Cup™ victory in an era when television was black and white, to the glorious sweep and drama of the 35mm filming of "Hero", the film of Mexico 86 which focused on Maradona’s finest and most controversial hour, here are films which stand the test of time.

• A-Z FIFA World Cup Football Programme (music)
The A – Z of Football consists of 60-second vignettes of the most spectacular action from exclusive film footage from the 1954 – 2002 FIFA World Cups™.

• FIFA Mini World Cups 1966-2006
Enjoy the highlights of each FIFA World Cup™ tournament, starting with the memorable 1966 finals in England and ending with the magnificent 2006 finals in Germany.

Sony is a leading global innovator of audio, video, communications and information technology products for both the consumer and professional markets. Sony is renowned for its audio-visual products, such as the BRAVIA™ LCD high-definition television, Cyber-shot™ digital camera, Handycam® camcorder, “α” (pronounced Alpha) digital SLR camera, and Walkman® MP3 player as well as its VAIO™ personal computers and high-definition (HD) professional broadcast equipment, highlighted by the XDCAM® HD. Offering a complete end-to-end HD value chain and with its electronics, music, pictures, game and online businesses, Sony is one of the world’s leading digital entertainment brands, employing approximately 170,000 people worldwide.

Through its long-term football partnerships as an official sponsor of the UEFA Champions League until 2012, Official FIFA Partner until 2014 and global sponsor of the FIFA World Cup™ in 2010 and 2014, Sony is inspiring a sense of excitement for the millions of football fans around the world.

The Fédération Internationale de Football Association is the world governing body of football, comprising 208 football associations grouped into six confederations. FIFA’s activities extend far beyond its broad spectrum of international competitions, headed by the FIFA World Cup™: FIFA provides material, financial and promotional means to develop the game around the world, and offers underprivileged communities support through the Football for Hope movement.

For more information on FIFA and its competitions, especially the 2010 FIFA World Cup South Africa™, please visit the official website at