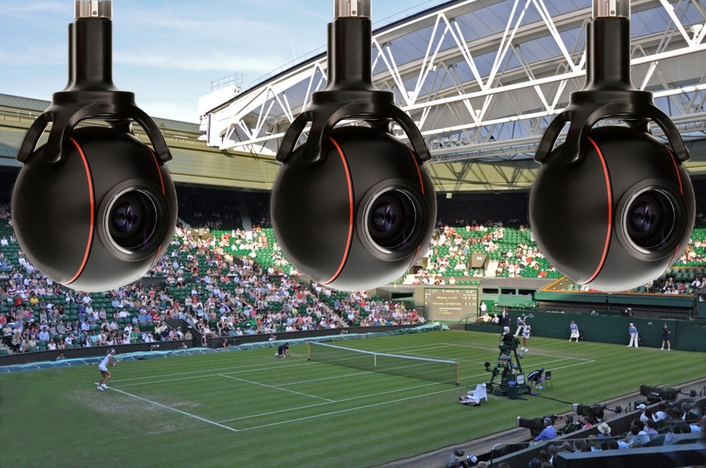 “Q-Ball systems have been installed for the duration of the event, capturing 1080i high-definition live video of the commentary for relay to broadcast networks across the world,” explains Camera Corps Equipment Manager Neil Ashworth. “Each Q-Ball is equipped with Camera Corps optical-fibre transmitter and receiver units linking the commentary studios with the master control room.

"In addition to the Q-Ball systems, we have installed Hotshot remotely controlled pan and tilt heads plus Minishots. One Hotshot is mounted on the stadium roof covering the Aorangi terrace and the London skyline. Other Hotshots are located on Centre Court to capture video of the baseline, players’ wives and the royal box. Each Hotshot is equipped with a joystick controller linked via 200 metres of three-pin XLR data control cable. The Minishots each include a Hitachi DK-H32 camera, Camera Corps control joystick plus a switcher box and are being used to televise player arrivals.”

Housed in a robust and fully-weatherproof 115 mm diameter aluminium sphere, Q-Ball is an ultra-compact remotely-controlled camera with integral 10-times zoom optical lens and smooth-accelerating pan/tilt motors. Equipped with a 2 megapixel CMOS sensor and capable of operating in daylight or infra-red illumination, Q-Ball delivers 1080i/720p high definition or 625/525 standard definition at 50 or 59.94 Hz refresh rates. Pan and tilt slip-rings allow unrestricted rotation of the camera head at a wide range of speeds with precise control of acceleration and deceleration. Master black and saturation control allow accurate colour matching with third-party cameras.

Wimbledon is the world’s oldest tennis tournament. Held at the All England Club in southwest London since 1877, it is one of the four Grand Slam tennis tournaments and the only event of its kind still played on grass. The tournament takes place over two weeks in late June and early July, culminating with singles finals. Each year, five major events are contested, as well as four junior events and four invitational events.