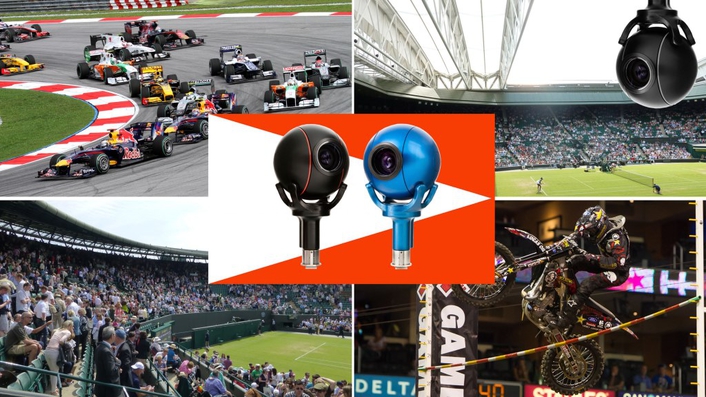 .
Camera Corps (a Vitec Group company) reports a highly successful summer of sport both in its role as a broadcast production service-provider and as manufacturer of robotic camera systems.

"One of the high points of our year to date was seeing a number of Camera Corps Q-Balls achieving global publicity when the winners of a major motor racing event celebrated their UK-leg triumph in June," states Shaun Glanville, Business Development Director. "The Q-Balls were so close to the action that they were showered with champagne on the winners' podium. Images of this event, and of two Q-Balls looking no bigger than a microphone, were broadcast live around the world and published throughout the international press. Earlier in June, Q-Ball captured close-up high definition images of Andy Murray at the climax of his success in the 2013 Wimbledon Lawn Tennis Championships. This was a moment the nation had been waiting for since Fred Perry's win in 1936, in particular the moment Murray went to hug his mother."

"We have provided cameras and support services to Wimbledon for over 10 years," adds Neil Ashworth, Equipment Manager. "These have been used in a variety of roles, giving television directors the opportunity to capture close-up images of the games in progress and of the commentators, as well as cutaways to long-range 'beauty' shots from cameras mounted high overhead. Our recently-introduced single-mode optical and Simply SMPTE dual-mode electro-optical camera links were used at Wimbledon wherever we needed to deliver live high-definition video over long distances."

During April, May and June, Camera Corps provided a wide range of support equipment for a fast-action sponsored television games series shot in Europe and South America. "The entire Camera Corp team were great," comments David O'Carroll, Technical Projects Manager, NEP Visions. "From our earliest conversations they provided the experience, flexibility and support necessary to help us achieve the best possible coverage for ESPN."

"We were active at a total of three X Games extreme-sports events in Brazil, Germany and Spain," adds Camera Corps' Senior Technician David Sisson. "Four Camera Corps technicians attended each event, working with David O'Carroll and his colleagues to capture dynamic close-up images of the action as well as long-range wide-angle views. Equipment used at each event included Camera Corps Q-Ball remotely controlled pan/tilt/zoom/focus cameras, Camera Corps VHR pan/tilt heads, point-of-view cameras and long-range optical fibre links. The Q-Ball heads were operated as com-cams, providing images of the presenters as they described the action. All the cameras were controlled using Camera Corps PTZF joysticks which provide the tactile feedback essential when covering fast-moving live content. Everything worked well at all three venues, including outdoor cameras operating under protective rain-covers. The resultant footage showed some of the most exciting events ever captured during outside broadcast productions and really was nothing short of extreme."

A Vitec Group company, Camera Corps specialises in providing high-volume support services for reality television programmes as well as very large-scale sports and stage events worldwide. Based on the site of the former Brooklands motor-racing circuit near London’s Heathrow airport, Camera Corps has achieved a pre-eminent reputation for its ability to acquire exciting and unusual television content from exceptionally challenging environments.