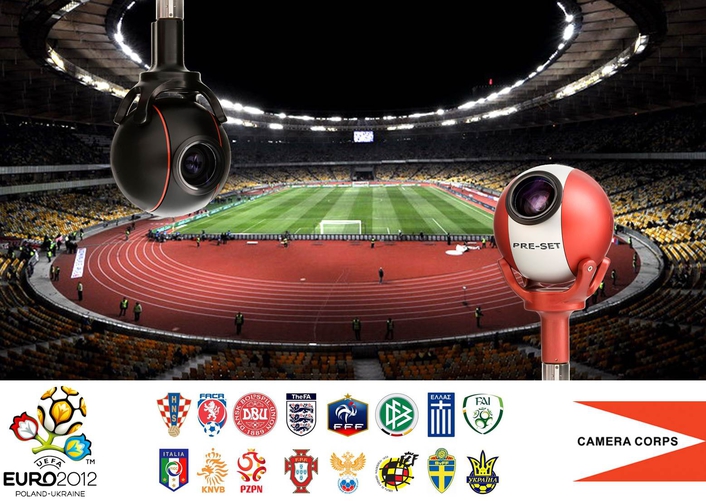 Camera Corps Q-Ball with Kiev stadium in background
Over 50 remotely controlled cameras, including 10 Camera Corps Q-Ball ultra-compact high-definition pan/tilt/zoom systems, are en-route to Poland and the Ukraine for the concluding round of games in the 2012 European Football Championship. 16 nations will compete between 8 June and 1 July, the winner gaining automatic entry to the 2013 FIFA Confederations Cup in Brazil.

A 20-strong team of Camera Corps technicians will install cameras at four venues in each of the two host countries. These will feed live video direct to the international broadcast centres in Warsaw and Kiev.

“Each of the eight venues will have two Hitachi DK-H32 cameras on VHR heads looking down the respective goal lines,” details Senior Support Technician David Sisson. “We will also be installing tactical cameras to capture pictures from the rear of each goal. Each of these will be a DK-H32 fitted with a wide-angle lens, again on VHR head. A similar configuration will be used to capture venue-wide shots. For external beauty shots we will field Hitachi DK-H100 cameras on our new Type 2B weatherproof head. Each of these will be mounted on a crane looking towards the stadium from the outside.

“Q-Ball systems on a newly designed magnetic breakaway mount will be on the grass behind the goal during the quarter-finals, semi-finals and the final itself. The Kiev installation will be supplemented by an extra camera mounted on a balcony in the city, with feeds being send back to the MCR at the stadium. These cameras will be controlled via a CCL Universal RCP and Large Joystick in the TV compound. Additional cameras at the Warsaw stadium will include a Camera Corps a MiniShot and a Hitachi DK- H32 in the press room.

“All our cameras will be operated in conjunction with Camera Corps SMPTE 3K fibre links. These will transport control signals, genlock and power to the camera and head. They will also carry the HD-SDI signals back to the control room.

Introduced at NAB 2012 in April, Camera Corps’ SMPTE 3K Remote Link allows remotely located broadcast cameras to be operated over 5 kilometres or more while maintaining the security and reliability of a dedicated link. Q-Ball and Q-Ball Pre-Set systems operate on relatively low power so can be operated over more than 8 kilometres.