Camera Corps Across All the Action in 2014 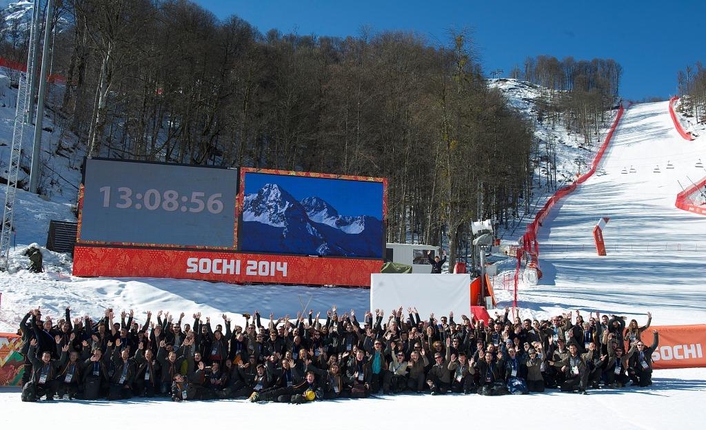 The Mountain venue  team in Sochi
2014 is proving another exhilarating year for Camera Corps working in partnership with major OB specialists, production companies and broadcasters globally.

"Speciality cameras for major international sports events continue to feature high on our agenda this year," comments Shaun Glanville, Director of Business Development at Camera Corps. "Events captured by our production partners using Camera Corps equipment and services this year have so far included the Winter Games in Sochi, Isle of Man TT, Wimbledon Lawn Tennis Championships, and the World Cup in Brazil."

"The acquisition of SIS LIVE's Special Cameras assets has boosted Camera Corps' extensive portfolio of equipment and its ability to do more work this year," adds Barry Parker, Commercial Manager. "It has also ensured the continued global availability of some of the most advanced special-purpose cameras in the business. The expanded Camera Corps range now includes live or recorded on-board mobile applications that can be used at many sporting events and a suite of specialist aquatic camera systems, as well as the globally acclaimed Cricket Stump Cam which gives unique video for live viewing or action replays from each end of the wicket being used all over the world."

Camera Corps deployed over 80 expert crew and dedicated specialist cameras in Sochi across multiple venues, from the Black Sea complex and in the cluster of mountain venues. In addition to robotic and commentary cameras, Camera Corps installed and operated SMPTE and fibre links used to transmit live high-definition video from the various venues back to the main control centre. A wide range of miniature devices such as wearable cameras were also deployed with the latest high-performance RF video links.

Delivering special camera footage from the mountains was key in telling the stories of the day and this aspect of Camera Corps' work was particularly praised by the client after the event.

Among the Sochi highlights was the winning footage from a Camera Corps helmet cam used in the Board Cross event. Also deployed were unique pop-up cameras were used to capture dynamic action shots during the Bobsleigh, Skeleton and Luge.

Maintaining business continuity with existing clients was key to the success of the SIS Special Camera acquisition, including installing numerous on board systems and effect cameras to capture the excitement of 2014 Isle of Man TT motorcycle races, supplying multiple Cricket Stump Cam kits for the Indian Premier League and signing a new multi-year contract with Sky Sports for Stump Cams for the domestic cricket season, including the positive launch of an innovative new system for the first Test Match series in June.

Paul McNeil attaching a camera and recorder to one of the Isle of Man TT Superbikes; kerb cams; weather-protected recorder

At the Wimbledon Lawn Tennis Championships a mix remote and fixed-position cameras were deployed by the Camera Corps team for Visions to cover Host, Unilateral and Club requirements across the venue. They captured a wide range of images including beauty shots and close-ups of the competitors of action and press conferences.

The world football championships in Brazil were the next stop on Camera Corps' global sports circuit, where the new Q3 robotic pan/tilt/zoom cameras were used by broadcasters at various presentation studios along Copacabana beach.

In October, the Camera Corps team heads to Korea for a large undertaking where it will be supplying managed specialist cameras across every venue for the 2014 Asian Games, and in particular installing a Plunge Cam to cover the diving competition.

Back home Camera Corps meanwhile continues to provide production specialist cameras for many domestic UK based sports, including athletics, football and rugby, across all major broadcast channels.

The Camera Corps equipment fleet encompasses HotShots, MiniShots and an array of remote specialist cameras and lenses, remote underwater systems, cranes, platforms and dollies. Equipment of Camera Corps' own design includes the iconic Q-Ball as well as many other bespoke camera systems.