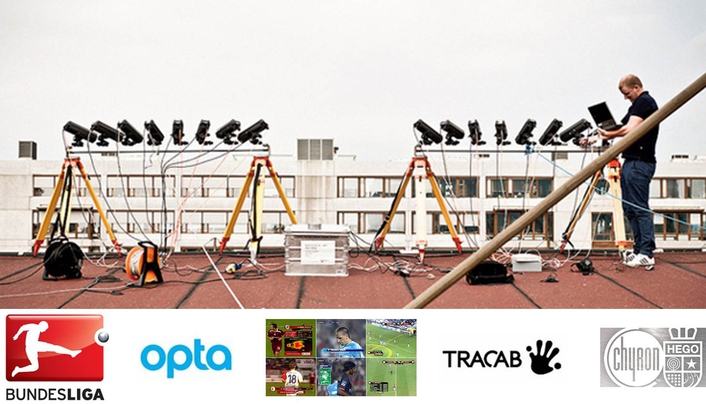 League to Implement Industry-Leading TRACAB Technology in Bundesliga and Bundesliga 2 Live Sports Broadcasts
ChyronHego announced that the Deutsche Fußball Liga (DFL) has selected ChyronHego to provide real-time digital sports data for the Bundesliga and Bundesliga 2’s live sporting broadcasts. ChyronHego’s acclaimed TRACAB system will be used to collect player and ball statistics in unprecedented detail for the span of the four year contract, valid until the close of the 2016/17 season.

“We are extremely proud to be engaging with the DFL on this important initiative,” said Chairman and CEO of Hego, Johan Apel. “The latest 4th generation of our TRACAB tracking technology that will be rolling out across the Bundesliga, will give huge possibilities on gaining much deeper insight into the game for clubs, the media and fans. It also offers exciting new opportunities for visually enhancing the league’s live TV coverage and second-screen applications with ChyronHego’s wide array of industry-standard broadcast solutions.”

The landmark contract has been awarded to ChyronHego who formed a consortium with Opta Sport and with whom they have worked on similar joint projects internationally. Opta Sport will be supplying match-specific statistics such as goals, assists, and throw-ins, etc. Hego will be collecting player/ball-specific data such as positional data, distance covered, and speeds.

In addition to supplying data to the league, the agreement also gives ChyronHego and Opta the rights to market the official Bundesliga and Bundesliga 2 data to the media, betting agencies, clubs, and league associations.

About Chyron
Chyron (NASDAQ: CHYR) is a leading provider of Graphics as a Service for on-air and digital video applications including newsrooms, studios, sports broadcasting facilities, and corporate video environments. An Emmy® Award-winning company whose products have defined the world of digital and broadcast graphics, Chyron’s graphics solutions include the Axis World Graphics online content creation software and order management system, on-air graphics systems, clip servers, channel branding, and graphics asset management solutions, all of which may be incorporated into the company’s BlueNet™ end-to-end graphics workflow.

About Hego
Founded in 1969, Hego has spent over four decades helping broadcasters and the sports industry offer audiences a more engaging live entertainment experience. Hego has a reputation for being at the forefront of enhancing the presentation of live data and video through its innovative technology in real-time graphics, virtual graphics, touch and telestration, as well as its revolutionary 3D player tracking system. These capabilities are delivered either as products or as full production services.
Headquartered out of Stockholm, Sweden the company also has offices in Finland, Norway, Denmark, Czech Republic, Slovak Republic, the United Kingdom and the United States.