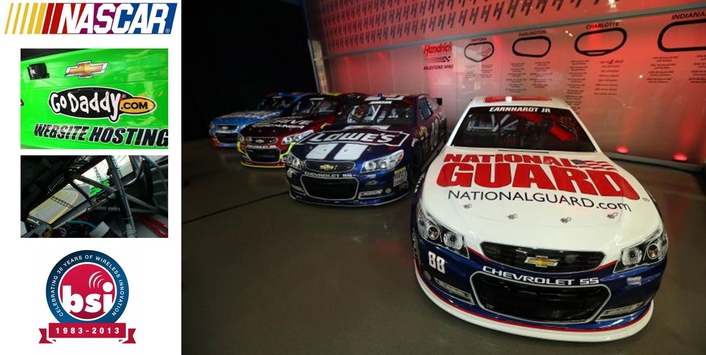 .
The 2013 NASCAR season kicked off to much fanfare with the debut of three new camera systems from Broadcast Sports, Inc. (BSI). BSI is a leading developer and service provider of wireless camera, audio and communication systems for the broadcast industry. The company worked closely with NASCAR and the teams to seamlessly integrate a gyro camera, a new bumper camera and new in-car mini Point-of-View (POV) camera into the sport’s new Gen-6 car body.

BSI’s new gyro camera is mounted inside the car behind the driver and automatically adjusts to stay level with the horizon using a built-in micro-electro-mechanical (MEM) gyroscope. The effect provides the viewer with a unique perspective of how steeply banked the turns of some of the NASCAR tracks can be, like those at Daytona and Talladega. Although the camera is designed to stay level automatically, it can also be controlled remotely for quality control or other applications.

“Until you drive around on one of these tracks yourself, you don’t realize just how steep they are. The gyro camera puts the viewer in the driver’s seat so they can almost experience it for themselves,” says Peter Larsson, General Manager at BSI.

In order to better see the drivers from the rear bumper camera, BSI worked with NASCAR and the car manufacturers to relocate the camera higher on the car while at the same time avoiding sponsor and manufacturer logos. The bumper camera’s panning capability allows the operator to follow the action as it happens around the car. The camera also features a crisp new lens and full control of all aspects of the image quality including iris, red/blue gain, shutter speed, saturation and master pedestal.

The new mini POV camera is mounted inside the car and trained on the driver throughout the race. Like the gyro camera and bumper camera, the mini POV is built on an HD camera core, capable of 1080i or 720p resolutions at 30, 50, 59.94, or 60 fps. All of BSI’s on-board cameras are designed to withstand the harsh conditions present in NASCAR races, from extreme vibration to the occasional crash.

Broadcast Sports, Inc. will be demonstrating the new mini POV camera and other technologies at NAB in Las Vegas, April 8-11. Visit the BSI booth in Central Hall #C11449.