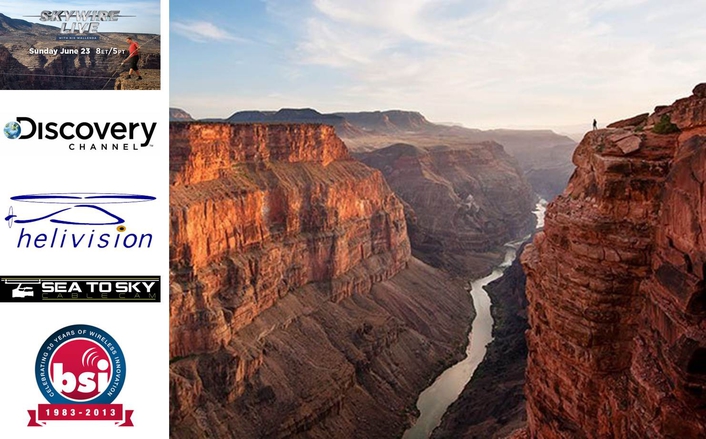 .
On Sunday, June 23, Broadcast Sports, Inc. (BSI) will show the world what it looks like to walk across the Grand Canyon on a tightrope suspended 1,500 feet above the Little Colorado River. The Hanover, MD-based company will be outfitting high-wire artist Nik Wallenda with a vest equipped with two wireless POV cameras to document his 1,200-foot walk across the canyon. The cameras Wallenda will be wearing are the same ones BSI deployed for the WNBA earlier this month in a head-mounted, ref cam system configuration.

The tightrope crossing will take place in a remote section of the canyon operated by the Navajo Nation Parks and Recreation. To capture the walk from start to finish in this isolated location, BSI will provide wireless camera links with remote camera control for a Sony HDC-P1 on a Steadicam, a Sony HDC-2500 handheld camera, a Sony HDC-P1 horizontal cable camera provided by Sea to Sky Cable Camera and the two BSI 1080i mini POV cameras on Wallenda’s vest. BSI will also provide a wireless camera link for a Cineflex HD helicopter camera supplied by Helivision, LLC. 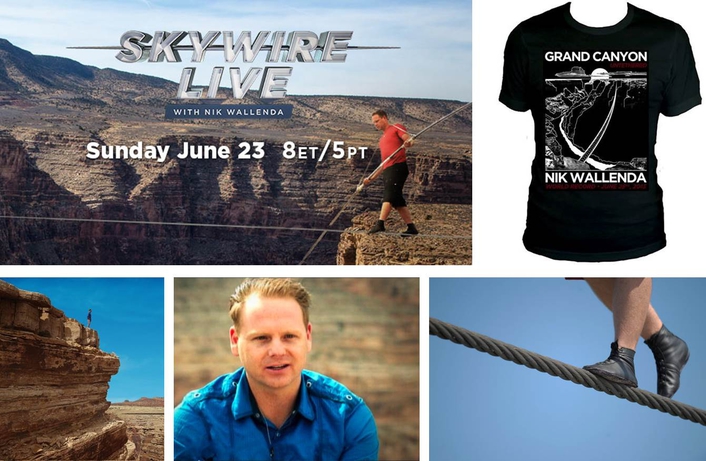 “Our Intelligent Diversity Receive System is completely scalable both in terms of technology and geography,” explains BSI’s Technology Development Manager Clay Underwood. “We are able to operate numerous wireless components in almost any environment. For Nik Wallenda’s tightrope walk, we need to cover the start and finish of the tightrope and every step in between from multiple angles in a remote area in what may be extreme conditions. We’re preparing for all scenarios so we don’t miss a moment of this exciting event.”

Daredevil Nik Wallenda completes tightrope walk near Grand Canyon
Wallenda performed the stunt on a 2-inch-thick steel cable, 1,500 feet above the river on the Navajo Nation near the Grand Canyon. He took just more than 22 minutes, pausing and crouching twice as winds whipped around him and the rope swayed.

The event was broadcast live on the Discovery Channel.

Winds blowing across the gorge had been expected to be around 30 mph. Wallenda told Discovery after the walk that the winds were at times "unpredictable" and that dust had accumulated on his contact lenses.

"It was way more windy, and it took every bit of me to stay focused the entire time," he said. 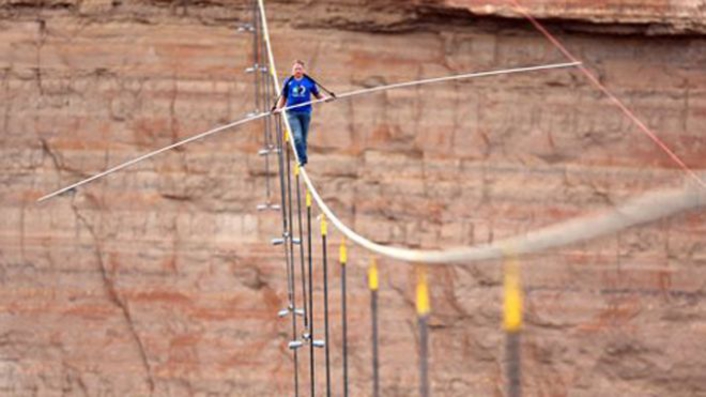 Nik Wallenda grew up performing with his family and has dreamed of crossing the Grand Canyon since he was a teenager. Sunday's stunt comes a year after he traversed Niagara Falls earning a seventh Guinness world record.

Wallenda wore a microphone and two cameras, one that looked down on the dry Little Colorado River bed and one that faced straight ahead. His leather shoes with an elk-skin sole helped him keep a grip on the steel cable as he moved across.

About 600 spectators watching on a large video screen on site cheered him on as he walked toward them. A Navajo Nation ranger, a paramedic and two members of a film crew were stationed on the canyon floor and watched from below.

Wallenda told reporters after the walk that he hoped his next stunt would be a tightrope rock between the Empire State building and the Chrysler building in New York. But he said he would give up tightrope walking altogether if his wife and children ever asked him.

Before the walk, a group of Navajos, Hopis and other Native Americans stood along a nearby highway with signs protesting the event.

The event was touted as a walk across the Grand Canyon, an area held sacred by many American Indian tribes. Some local residents believe Wallenda hasn't accurately pinpointed the location and also said that the Navajo Nation shouldn't be promoting the gambling of one man's life for the benefit of tourism. 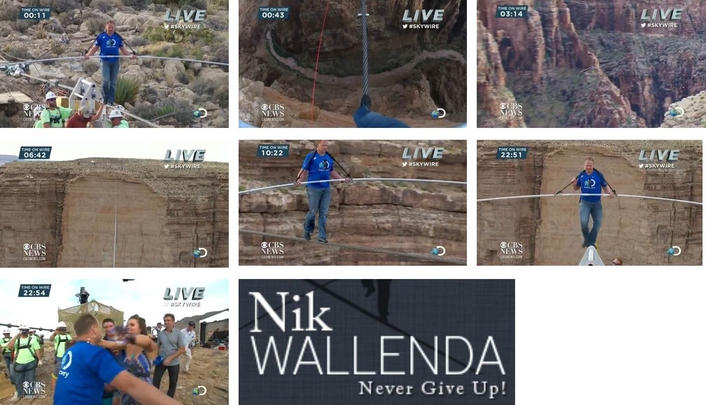 "When people watch this, our main thing is we want the world to know who Navajo people are, our culture, traditions and language are still very much alive," Geri Hongeva, spokeswoman for the tribe's Division of Natural Resources, said before the walk.

BSI supplied wireless HD program video for the press area, camera operators and a wireless teleprompter feed for the SteadiCam.