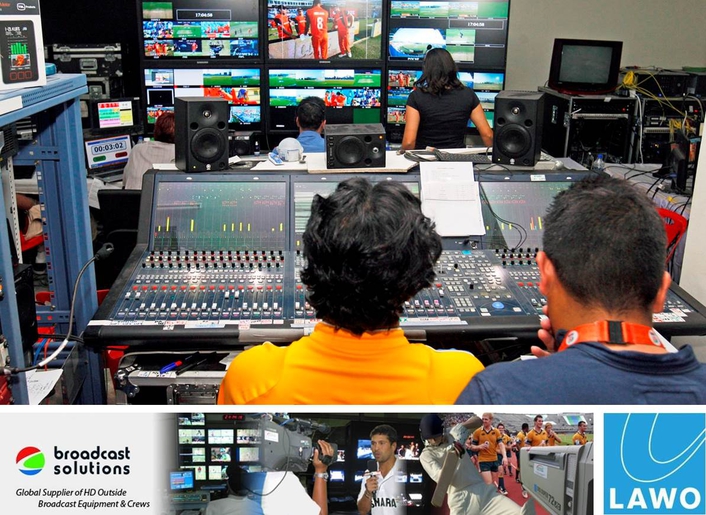 It is difficult to imagine an OB services supplier being more involved in the world of sport than Broadcast Solutions
As it worked towards the completion of the ICC (International Cricket Council) World Twenty20 competition in early April – broadcast in 5.1 surround for the first time – it was also preparing to move its cricket coverage from Bangladesh to the UAE and India to cover the Indian Premier League (IPL). Alongside the IPL, Broadcast Solutions will also be handling golf tournaments in Malaysia and Indonesia, a football cup tournament across two venues in Vietnam, a badminton tournament in India and further a cricket competition in the West Indies. Directly after these events, the company will relocate to Brazil for the 2014 FIFA World Cup in June and July, while readying for the Asian Games in South Korea during September and October.

Founded in 2000 and now operating from centers in Singapore, the UAE, India and the UK, Broadcast Solutions’ status as a ‘global supplier’ of HD outside broadcast services and crews is fully justified. And the recent addition of new Lawo mixing and routing systems to its inventory comes as little surprise.

The story began with a contract secured in 2013 to provide production facilities for the 2013, 2014 and 2015 editions of the IPL to serve clients including STAR Sports, Ten Sports and the Board of Control for Cricket in India (BCCI). For the first tournament, the company fielded nine OB kits and purchased three Lawo mc²56 digital broadcast consoles with HD Core technology for this purpose. A further six Lawo systems used at this event were hired for the job.

This year, Broadcast Solutions provided all broadcast facilities – including cameras, EVS, comms systems, audio systems, video engineering equipment, vision mixers and the engineering crew – for the three venues in the UAE and the eight venues in India used in the tournament. In addition, the company has purchased six further Lawo mc²56 16-16C-0 consoles with HD Cores and DALLIS system I/O.

Flying start
Broadcast Solutions’ sports services are based on flyaway OB systems, which enable individual production environments to be set up anywhere in the world – regardless of how complex the requirement. Since it has been relying on Lawo systems, these have been deployed at the IPL 2013, domestic and international cricket matches in India, the Hockey Indian League and this year’s ICC World Twenty20 in Bangladesh.

Explaining the choice of Lawo mc²56/HD Core systems, Alex Prüstel, Broadcast Solutions Deputy COO (Singapore), highlights the flyaway nature of their operation: “We need a solution that gives us a surface that is not big, but allows access to all functionality of the system along with a router system that allows remote access via external controller, and at the same time, full access to the router from the surface. We also need to produce 5.1-surround audio without any additional effort and/or equipment.”

“In addition, we must be able to take productions from one system to another, even when the hardware configuration is not the same, and we require operational functionality that is almost self-explanatory, so we can use cricket specialists who might be not familiar with such complex systems.”

“Using the system as router and mixing system gives us high-quality surround capabilities,” he adds. “It’s a good experience.”

On top of these requirements, the systems must also allow for later expansion, if it should be required for other productions, and be absolutely stable. Weight and size were also taken into account, as these affect shipping/production costs.

“After we finished the ICC World Twenty20, we directly began production of IPL 2014, which will be held in UAE and India,” Prüstel says. “We will use eight Lawo units – seven mc²56 consoles and one mc²90 – to make sure that we do deliver the same high quality from each venue.”

The IPL tournament will play out its first leg in the UAE, at the Dubai International Cricket Stadium, the Sharjah Cricket Stadium and the Sheikh Zayed Stadium in Abu Dhabi, before moving to India for its second leg and grand final. This will involve setting up production facilities in a further seven or eight venues.

“As cricket production needs a lot of knowhow about the match, Lawo allows us to use fewer operators (mixers) and move them around the venues,” Prüstel explains. “This ensures that we produce all matches to the same level of quality and at the same standard.”

The Lawo mc²90 console that will be used is to be provided by a rental company in Abu Dhabi in an OB truck. “This truck is a former TV-Unit truck, which is still the only one in Western Hemisphere with such a big Lawo system,” says Prüstel.

As well as the Lawo audio systems, Broadcast Solutions has begun using a number of Lawo’s V_pro8 to provide an 8 x 8 video matrix and 384 x 384 audio matrix, and cost-effective SDI embedding/de-embdedding.

Broadcast Solutions’ claim to be “the foremost supplier of HD outside broadcast equipment… well-placed to support the growing demands of broadcasters across the world” is unlikely to be challenged. The company might also add that its experience of technical systems makes it uniquely placed to make the best choices – such as those it has taken from Lawo.