.
Videosys Broadcast, a leading supplier of broadcast solutions for film, television and A/V, has announced that Broadcast Rental, an international full service rental house in Hilversum, the Netherlands, used Videosys technology to provide coverage of the 2014 World Rowing Championships in Amsterdam from 24-31 August 2014.

Billed as the largest rowing event ever held in the Netherlands, it was covered by NOS with technology from Cobham Broadcast and a custom-built racking system devised by Videosys for use with a range of 6 out of the 18 professional cameras along the banks of the course, on tracking vehicles, chase boats and cable cams.

GP Slee, founder and CEO of Broadcast Rentals, said, “Covering a rowing event can be complicated because you’re providing coverage from land and water. We provided all the wireless connections for the cameras deployed by NOS to support a multilateral signal. In this case it was seven HD video connections for six separate cameras using Cobham Solo 4 MPEG4 HD links and a Videosys camera control system that ensured high quality pictures with 100 percent control reliability”.

Two Cobham RF transmitters were also used for live and ultra-slow motion signals from an NAC Hi-Motion camera, which ran in autoplay and wirelessly transmitted both 1080i signals via Cobham’s Mpeg 4 ultra low delay technology. 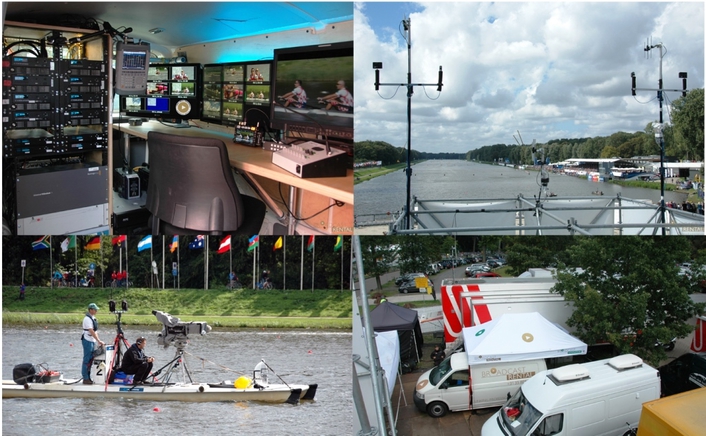 Videosys Sales Manager Alistair Horne said, “Working on events with multiple RF cameras can be tricky, especially when there are long distances involved and multiple camera types (Sony, Grass Valley and Ikegami), but with Broadcast Rental’s experience, the Cobham transmission and Videosys fibre and camera control solutions, the show was a complete success.”